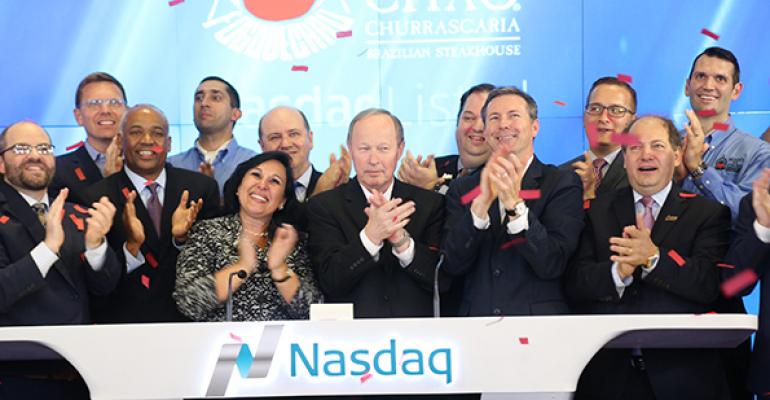 Fogo de Chao Inc. made its public debut Friday on the Nasdaq market, pricing its shares at $20 and raising about $88 million.

The Dallas-based Brazilian-style steakhouse operator, which has 37 casual-dining restaurants in three countries, said the company will use proceeds from the IPO to pay down debt and fund growth.

The $20 opening share price was higher than the $16-$18 per share range the company had filed for earlier. As of market close Friday, the 4.4 million shares traded at $25.75, an increase of 28.8 percent. That would put the company’s market value at more than $700 million, not including added shares in an over-allotment option.

Fogo de Chao CEO Larry Johnson told Nation’s Restaurant News Friday that the IPO “represents a milestone for the company and the beginning of the next phase of growth for us.”

Fogo de Chao has 26 units in the United States, 10 in Brazil and one joint-venture restaurant that opened in May in Mexico, Johnson said.

“We’re looking at at least 10-percent company-owned store growth going forward,” Johnson said. “We think that is something that is achievable and manageable. And we think there is tremendous white space out there. In the U.S., we think we can do another 100-plus stores.”

Johnson said growth would be in a combination of existing and new markets.

“In the last couple of years, we’ve re-engineered the kitchen and made it more efficient,” Johnson said. “We’ve put more space in the front. We’ve been doing newer stores that are smaller.”

“Most of the stores we’ll be building in 2016 will be in the 8,500-square-foot range,” Johnson said. “We know we can be very compact and still go into 10,000-square-foot stores in appropriate markets.”

Fogo de Chao plans to continue its upscale-casual approach, which with an average check of about $59.

“We think it’s a compelling value proposition,” Johnson said. “The proof is in the results. We run $8 million AUVs [average unit volumes]. … We have a lot of people who get it and appreciate it.”

Revenue last year for the company was $262.3 million, according to SEC filings.

Besides domestic U.S. growth, Fogo de Chao plans to expand in countries beyond Mexico and Brazil.

“We have another joint venture in the Middle East,” Johnson said. “We’re looking for our first store in Dubai in 2016.”

Proceeds from the IPO will go toward Fogo’s $243 million in debt, according to filings with the U.S. Securities and Exchange Commission.

The company is owned by Thomas H. Lee Partners, which bought the brand in 2012 in a deal valued at $426 million.

The first Fogo de Chao restaurant opened in Porto Alegre, Brazil, in 1979, and the first U.S. unit opened in 1997 in Addison, Texas.