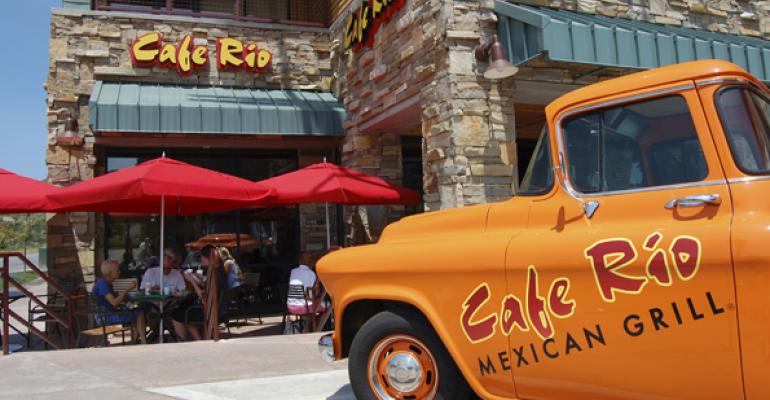 Café Rio rumored to be preparing for IPO

Café Rio Inc. may be the next restaurant chain to go public.

The Wall Street Journal has reported that owners of the Salt Lake City-based fast-casual Mexican chain are interviewing banks ahead of a planned initial public offering, citing unnamed sources.

Bob Baker, Café Rio’s president and chief financial officer, said he couldn’t comment on the report, as did officials with the chain’s private-equity owner, KarpReilly LLC.

Baker said Café Rio currently has 68 units in 11 states and the chain is planning to add 10 new restaurants this year, including two that have already opened. By year’s end, Baker said the chain will reach 76.

The average check is about $9 per person and $12.75 per transaction. In fiscal 2013, the chain recorded revenues of $137 million. All restaurants are company owned, and Café Rio has no plans to franchise.

Café Rio was founded in 1997 in St. George, Utah, by Steve Stanley, a chef who created a menu inspired by the Rio Grande region of northern Mexico, South Texas and New Mexico. The concept became known for its from-scratch cooking, with everything from tortillas to guacamole made in-house each day.

Stanley grew the chain to six units before selling it in 2004 to quick-service veteran Bob Nilsen, the former president of Burger King who also had a long history with Yum! Brands Inc., including a stint as chief operating officer of Taco Bell and working with sister brands KFC and Pizza Hut. Nilsen was joined in the acquisition by private-equity firm Saunders Karp & Megrue, which later merged with Apax Partners Inc. Allan Karp and Christopher Reilly left Apax to form KarpReilly LLC.

In addition to its stake in Café Rio, KarpReilly has a number of current and realized restaurant investments in its portfolio, including the fast-casual chains Burger Lounge, Café Zupas and Habit Burger Grill; casual-dining chains Miller’s Ale House, Marie Callender’s, Z-Tejas Southwestern Grill, Mimi’s Café, Elephant Bar and Hooters; as well as the cupcake concept Sprinkles.

Café Rio joins a growing number of limited-service restaurant chains that have proposed IPOs or are rumored to be preparing for one this year.

Zoe’s Kitchen Inc., parent to the fast-casual Zoë’s Kitchen chain, set terms for its planned IPO this week with the goal of raising $80.5 million.

The parent to the Papa Murphy’s Take ‘N’ Bake Pizza chain also filed for an IPO in March, hoping to raise $70 million, and is expected to announce terms shortly.

The private-equity owners of quick-service-but-fast-casual-leaning El Pollo Loco are also reportedly prepping for an IPO.

Officials at the fast-casual Smashburger chain have also confirmed they are exploring strategic options that could include a possible sale or IPO.

According to IPO tracker Renaissance Capital, 2014 has outpaced 2013 in IPO activity, with 55 filings so far this year compared with 21 during the same period last year — a 162-percent increase.

Correction: April 3, 2014  An earlier version of this story incorrectly described the history of the private-equity backing for Café Rio. The initial investment was made by Saunders Karp & Megrue, which later merged with Apax Partners Inc. Allan Karp and Christopher Reilly left Apax to form what is now known as KarpReilly LLC, a major stakeholder in Café Rio.