The latest updates on coronavirus and COVID-19 for restaurants, operators and the food service industry 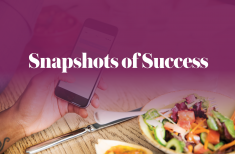 Snapshots of Success
See how 15 restaurant brands thrived during the worst crisis in modern history in this report.

Hooters CEO Sal Melilli: Virtual brands have helped us thrive during the pandemic
Jul 16, 2021
The casual-dining chain benefited by having off-premises infrastructure in place beforehand

Rescinded: The faces and voices the SBA left behind
Jul 15, 2021
Thousands of restaurants were approved for grants from the U.S. Small Business Administration’s Restaurant Revitalization Fund and never received a penny. Here are some of their stories.

Clean Juice aims to be a leader in the healthy foods market
Jul 09, 2021
Clean Juice co-founders Landon and Kat Eckles discuss the growth of their Charlotte, N.C.-based juice franchise and the creation of a lifestyle brand

Advocacy group Independent Restaurant Coalition demands answers from SBA: ‘What happened with the Restaurant Revitalization Fund?’
Jul 08, 2021
The IRC has submitted a FOIA request for more details on applicant submissions, process of approval and whether or not they were considered priority applicants

The SBA is closing the Restaurant Revitalization Fund portal on July 14
Jul 01, 2021
Restaurants that have not received funding as of July 1 will go back in the queue if there is a second round of grants
Load More