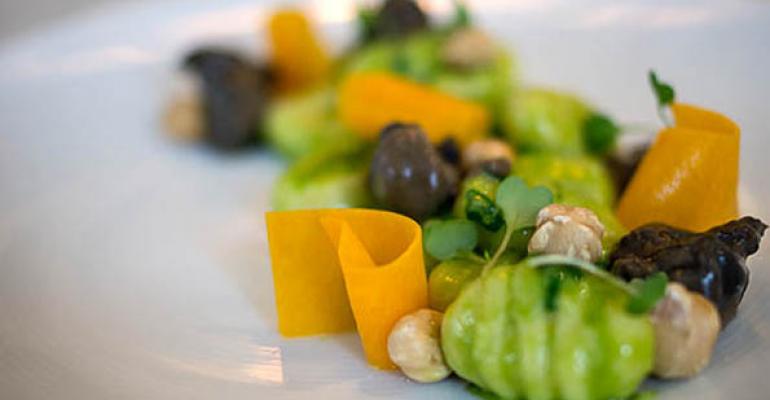 Chef Robert Marzinsky says the key to good gnocchi is cooking the potato just right, so they don’t soak up too much flour.

“Potatoes have a really funny window between being not cooked enough and being overcooked,” he said.

He cooks Russet potatoes until they’re just past fork-tender and can be passed easily through a food mill. Once he passes them, he lets them dry on a towel at room temperature. Then he adds egg yolks, flour, butter and a little piave vecchio cheese — a less expensive cousin of Parmigiano-Reggiano — and presses the mixture into a sheet tray.

Marzinsky lets the mixture sit for a couple of hours before shaping the gnocchi, which he does by cutting off rectangles, rolling them into tubes, cutting them into gnocchi-sized pieces and rolling them into balls. He freezes them for about 20 minutes to firm them up, and then cooks them right before service, portioning them into pint containers.
They keep for a day or two, he said.

He makes an herb butter by blanching spinach and finely chopping tarragon then folding both of them into the butter. He then adds a reduction of chartreuse with the alcohol burned off.

Marzinsky rinses top-quality canned snails from Burgundy, France, and slowly poaches them for two to three hours in a court-bouillon aggressively flavored with coriander, cumin, dried fennel and other curry spices, white wine and a lot of citrus. He cools them and holds them in the liquid to keep them from drying out.

He also makes a purée of garlic that he has blanched five times to mellow out its sharpness.

To order, he warms the gnocchi in the chartreuse butter and warms the snails in the blanched garlic purée. He adds canned black truffle for flavor and color — “It’s actually the color of the snails: gray,” he said — and toasted hazelnuts for crunch.

The dish also includes butternut squash sliced into ribbons and pickled in a vacuum sealer, which impregnates the vegetable with flavor without causing it to fall apart. He rolls them into tubes and plates them with the gnocchi. “It’s a nice counterpoint visually and texturally,” he said.