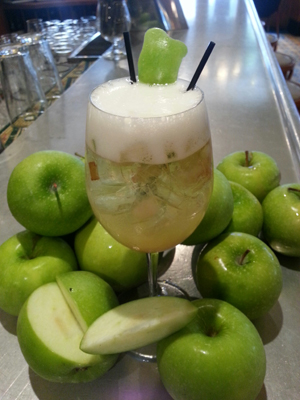 To make the drink, he fills a cocktail shaker with ice and adds an ounce of Calvados, three-quarters of an ounce of pear liqueur, the juice of half a lemon, and a quarter ounce of simple syrup.

He shakes the mixture and pours it into a wine glass filled two-thirds with ice, adds diced apple and pear, tops it with hard apple cider, and garnishes it with an apple twist and cocktail straw.