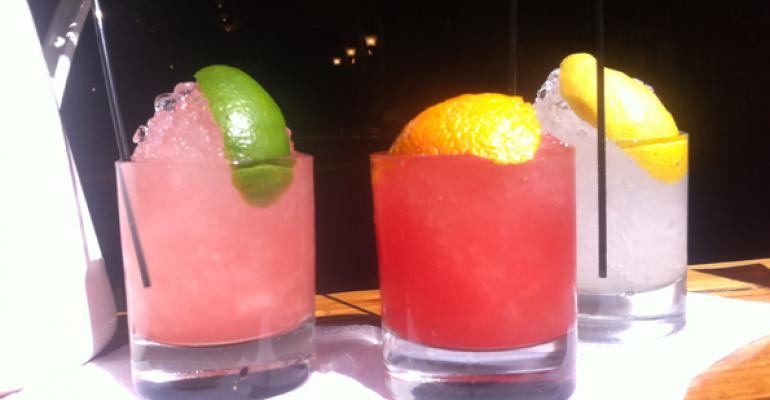 Frozen desserts spiked with liquor are all the rage this summer, but they present an operational challenge because adding liquor lowers a liquid’s freezing temperature. That gives restaurateurs a choice of either serving genuinely frozen desserts with trace amounts of alcohol, or high-octane treats that aren’t really frozen.

Matt Suchomski, co-owner of Todd’s Mill, came up with a solution to this dilemma with his spiked snow cones.

For this item, which is available during weekend brunch and Fridays from 1 p.m. to 7 p.m., Suchomski rotates different flavors each weekend. This weekend the restaurant will offer lavender-honey, cherry-peppercorn and plum-Thai chile snow cones. Next weekend he plans to offer watermelon-jalapeño and peach-Thai basil varieties.

The snow cones start with simple syrup that Suchomski simmers with whatever flavors he likes, generally finishing it with some kind of acid, ranging from citrus juice to chile sauce.

Next, he pulverizes ice in a food processor until it’s the texture of a snow cone. He then scoops the ice into rocks glasses. He adds a shot of hard alcohol — whatever the customer prefers — to the syrup and pours it over the ice.

The snow cones are priced at $8, but virgin versions are available for $3.

Correction: July 8, 2013  An earlier version of this story misstated when the snow cones are served. They are available during weekend brunch and on Fridays from 1 p.m. to 7 p.m.