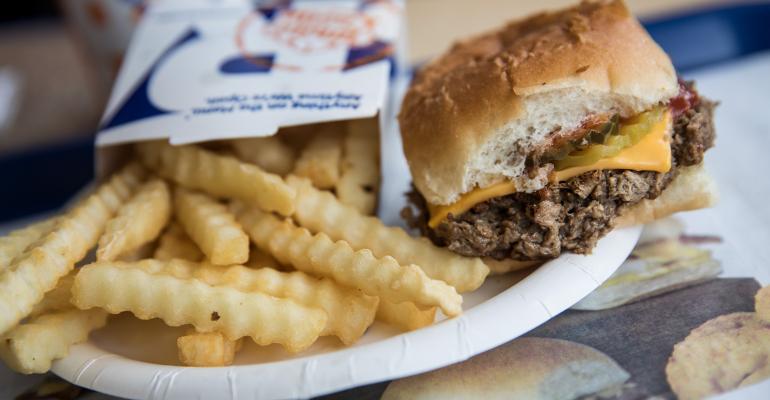 Would you like some coagulated soy construct with your textured pea protein? 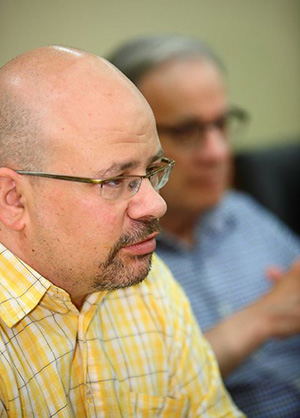 Nancy, my bosses would probably fire me if I didn’t say I was delighted that you are taking the main stage at MUFSO this year — which as you know, but some of our readers may not, is Oct. 1-3 at the Hyatt Regency Reunion in Dallas — to discuss menu trends.

But I really am delighted. It’s always nice to see you, and your breakdown of the trends on menus is always chock-full of information. I learn a lot.

I don’t know what you’re going to be talking about, but I bet plant-based food is going to come up.

If that’s what you call it, that is. “Plant-based,” as you know, is a relatively new euphemism for vegan food — food that doesn’t contain any animals or animal byproducts such as milk or eggs.

Why not just call it vegan? Because people are turned off by that term. A survey earlier this year by the market research firm Morning Consult asked Americans what words or phrases made groceries less appealing, and “vegan” topped the list at 35 percent, more than “diet” or “sugar-free.”

The survey didn’t say why consumers didn’t like the word, but conversations I had about vegan food at the recent Menus of Change conference at The Culinary Institute of America in Hyde Park, N.Y., were illustrative. “Vegan” is a loaded term, they said. It comes with a lot of political baggage and self-righteousness.

That’s not a new thing. The term “vegan” was coined by The Vegan Society, a British organization established in November of 1944 by strict vegetarians who wanted to underscore the fact that they didn’t eat dairy. According to the organization’s web site, they bandied about other terms like “dairyban, “vitan” and ”benevore” before settling on a term that used the first three letters and last two letters of “vegetarian” to indicate that they were “the beginning and end of vegetarian.” In other words, if you consumed dairy (or honey, but let’s not go there), you weren’t legit.

It was, above all else, an animal rights organization founded on the “principle of the emancipation of animals from exploitation by man.”

I bet you know what food term has the most appeal according to the Morning Consult survey: “Fresh.”

Plants certainly seem fresh, so “plant-based” was probably a wise term to use to promote vegan food. There’s just one problem with it: Only insiders know that “plant-based” means vegan. To the casual observer, couldn’t a chicken Caesar salad be considered plant-based? It definitely has a base made of plants.

With all sorts of genuinely new non-animal products coming onto the market — the wheat-based Impossible Burger, pea protein-based Beyond Meat, soy-based Improved Nature and others — as well as old but newly popular ones, such as almond milk and coconut milk, figuring out what to call food so consumers simultaneously know what it is and want to consume it can be tricky.

And it could get trickier in the event that a bill currently wending its way through Congress becomes law.

“The Defending Against Imitations and Replacements of Yogurt, Milk, and Cheese To Promote Regular Intake of Dairy Everyday Act,” or The Dairy Pride Act, as it’s also known, was introduced by Democratic Wisconsin Senator Tammy Baldwin in early 2017 with the backing of the dairy industry. It’s still in committee, and doesn’t seem likely to go anywhere any time soon, but it would require that dairy terms such as “milk” and “cheese” not be used for products that don’t contain milk as the primary ingredient.

Vegan advocates have argued that such a law would violate the First Amendment, which seems like a stretch to me, but hey, I’m not a Constitutional lawyer. They also argue that consumers know that products like soy milk and almond milk are non-dairy, which also seems like a stretch, since consumer confusion over what they eat and drink is mind-bendingly widespread.

Some non-dairy “milk” producers also argue that their products are more healthful than actual milk. Others argue that consuming dairy is immoral, bad for the environment, or just gross — it’s the lacteal secretions of other mammals, after all.

So, then, why would they want to associate themselves with milk? Well, what else should you call the stuff? Soy bean juice derivative? Ground almond slurry?

I do like the names of some of the chicken substitutes I’ve seen on menus, like “chick-un,” and “range-free chicken,” although the latter one is a bit too clever and as often as not is probably read as “free-range.”

It’s a puzzler, Nancy. Demand for animal-free food is clearly on the rise, but much of that demand is coming from people who just want to cut back on meat without signing on to an animal rights manifesto. They don’t want to be served a political agenda with their vegan cheezburgr.

And on that note, it’s lunchtime for me, Nancy, so I’m going to hand this over to you and ask your thoughts on all of this. How do you make meat-free food emotionally palatable to the masses? 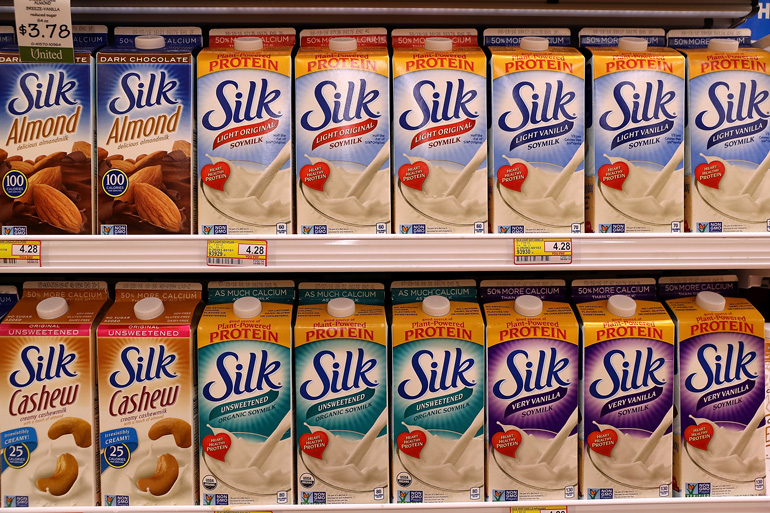 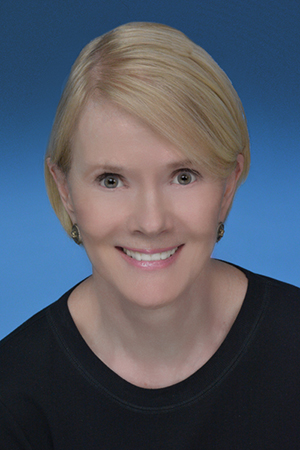 I was truly tickled, Bret, by your endorsement of my upcoming State of the Plate presentation at MUFSO, qualified as it may have been by threat of possible termination. Still, I am not ashamed to take my compliments where I can get them, and I basked in the warm glow of your approval all the way through your (correct) assumption that I’ll be touching on plant-based foods among other trends in my MUFSO report. Unfortunately, my pleasure was short-lived; in fact, I turned positively grumpy when you raised the subjects of veganism, “milk” products and consumer confusion.

As you know, the past few years have seen litigation around similar issues, like the high-profile lawsuits involving Just Mayo, an eggless product that was taken to court by the mega mayonnaise moguls at Hellman’s, who were looking to protect their dominant market position. The interloper, they charged, was misleading the public. The Food and Drug Administration joined the legal fray, citing its established standards of identity that clearly state that mayo is made with eggs.

Just Mayo’s CEO Josh Tetrick, cool as a cucumber under fire, walked away with only minor concessions. According to the settlement reached with the FDA, the product name remained unchanged, though verbiage on the label about its lack of eggs was made bigger and the egg that stars prominently in the company logo was made smaller. Tetrick later said that he had explained to the suits that the term “Just” has a dual meaning. It refers both to product’s “lack of excess ingredients” and to the company’s mission to “make healthier goods more attainable to everyone.” What was that you said about self-righteousness? He also admitted that positioning the product as vegan would “turn off mainstream consumers,” which may be the crux of the issue and makes him a bit disingenuous to boot.

Several decades ago, American dairy farmers launched a very effective offensive against the makers of analog cheeses that were making incursions into the pizza and burger segments, where they sell absolute trainloads of real cheese. Restaurateurs looking to cut their food costs were cutting dairy cheese with the imitators, a fact not always obvious to diners. After all, if you pile enough pepperoni on your pie or enough bacon on your burger, you may not notice that the cheese is slightly altered.

The dairy industry won that round by insisting that the consumers have a right to know what they are consuming and that operators should be honest in their menu labeling. They backed this up with a savvy grass-roots campaign that rallied pizza makers from coast to coast, who pledged their allegiance to the real thing and were supported by advertising and in-store materials. Though they’ve had a breather, it looks like cheesemakers had best gear up for another round: A company called Real Vegan Cheese recently raised capital on Indiegogo to promote its product, which is made from baker’s yeast with “no cows needed.” The campaign was a resounding success that netted 249 percent of its original fund-raising goal.

At the same time, dairy farmers risk being submerged by wave after wave of so-called “milk.” Nielsen reports that sales of milk substitutes in the United States have grown at a compounded rate of 7.7 percent over the past four years, while dairy milk volumes dropped 3.4 percent in the same period. And while Netherlands-based Rabobank estimates that alternatives represent only 3 percent of the global milk industry, analysts note that, even though they have no evidence to support claims of superior health benefits, dairy-free-milk upstarts have done the superior marketing job. It’s worth noting that innovative grocer Trader Joe’s, the small-format retailer with the very large following, is selling Cocoa Almond Cashew Beverage, thereby sidestepping the ‘m’ word altogether while being totally transparent with customers.

I like your brief history of the term vegan, which brings up the question of what non-dairy “milk” producers should call themselves. As a four-letter word, milk resists easy abridgement.  Surely all the smart money behind plant-based liquids should be sufficient to buy the best, most creative branding gurus in the food world.

Worst case, I suppose, is that they turn the whole issue over to the techs, a practice that had its moment at the dawn of the 21st century, when major companies fed descriptors into a computer in an attempt to rebrand and to shed their outmoded 20th century images. I remember the brouhaha that surrounded the computer-assisted transformation of International Harvester, a manufacturing giant that makes agricultural and construction equipment, into Navistar, which sounds like something that should be launched into space. Or the somewhat perplexing rechristening of Arthur Andersen’s respected consulting division as Accenture, which sounds like a chapter in a grammar book.

So perhaps a name as simple and straightforward as beverage, drink or juice will suffice to describe this category and its products. Just please don’t call them milk, Bret, because that is something they simply are not.