Wendy’s, Subway and Taco Bell might consider targeting older generations with their limited-time offers, according to a survey by E-Poll Market Research.

The research firm, which tracks consumer opinions of celebrities, brands, characters and other high-profile aspects of American culture, recently asked a representative sample of 1,500 consumers ages 13 and older how likely they were to try new menu items at 25 limited-service restaurant chains.

“There are significant differences between the age groups, but one observation is that newer or ‘trendy’ [restaurants] such as Starbucks, Panera Bread, Chipotle and Jamba Juice were higher for Millennials, while the more established QSRs like McDonald’s, Burger King and Wendy’s were generally higher for the older generations,” Randy Parker, E-Poll senior director of marketing and communications, wrote in an email. 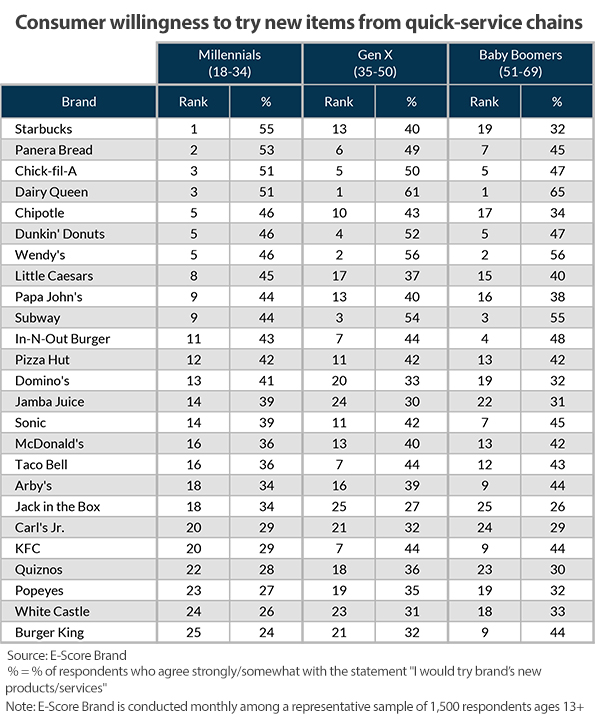 The percentage of Millennials, or those ages 18 to 34, who agreed strongly or somewhat with the statement “I would try [brand’s] new products/services,” was highest for Starbucks, Panera Bread, Chick-fil-A and Dairy Queen, in that order.

For Generation X, or those ages 35 to 50, and Baby Boomers, or those ages 51 to 69, Dairy Queen, Wendy’s and Subway scored the highest, in that order. Dunkin’ Donuts was in fourth place among Gen Xers, and In-N-Out Burger ranked fourth among Baby Boomers.

Taco Bell ranked 16th among Millennials, with 36 percent saying they would try new items from the chain — on par with McDonald’s — while Taco Bell ranked seventh among Gen Xers, at 44 percent, and 12th among Baby Boomers, at 43 percent.

Older generations were also more generous to McDonald’s, with 40 percent of Gen Xers and 42 percent of Baby Boomers saying they would try new items from the chain.

Dairy Queen scored high across the board, as did Chick-fil-A, which came in fifth place among Gen Xers and Baby Boomers and third among Millennials.