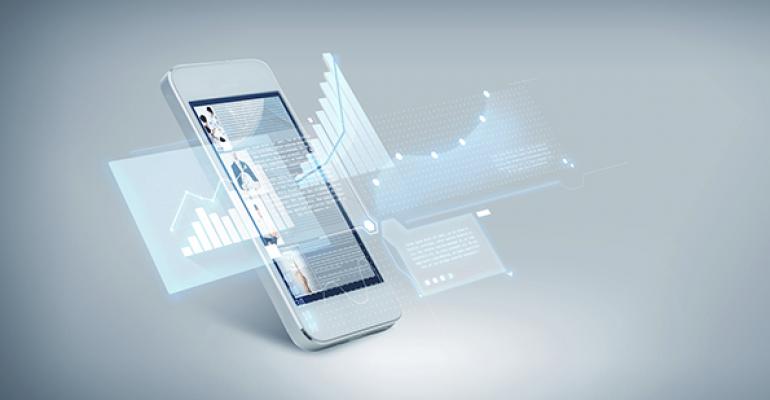 Pizza chains are leading the industry with cutting-edge technology, but American consumers expect more tech features from all restaurant segments, according to a recent report by Technomic Inc.

Chicago-based Technomic surveys consumers regularly as part of its ongoing Consumer Brand Metrics survey. For the first time, at the end of 2014, consumers were asked how different restaurant brands were performing in terms of technology.

While only about a quarter of the data is in, with about 175 respondents per brand, an initial look indicated that tech features are essential and strongly influence the restaurant selection decision, particularly for Millennials, the report found.

“Technology-friendly service in restaurants has become important to consumers broadly, and to Millennials and Generation Z customers, it’s essential,” said Colleen Rothman, manager of consumer insights for Technomic. “Consumers will continue to look to pizza chains and fast-casual brands for the latest and greatest digital platforms, but they also will expect all restaurants to integrate many technologies that have become a fact of daily life everywhere.” 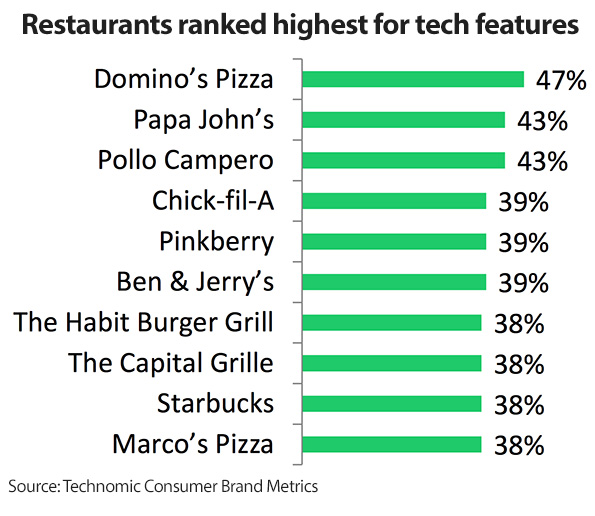 Pizza chains ranked highly on all attributes related to technology, with Domino’s leading the pack. Three-fifths of Domino’s customers praised its integration of technology into the ordering process, according to the report.

Domino’s customers can place orders by text or emoji, by Twitter or on their Samsung Smart TV. The chain also has an ordering app that works on a smartwatch, and some customers can order from their car using the Ford SYNC AppLink.

The survey found that tracking loyalty points and rewards was the most important tech amenity for consumers across the limited-service and full-service segments. But it was more important to Millennials, who also placed heavier emphasis on the availability of online and mobile ordering.

Although mobile payment is currently less common among restaurant chains, more than a third of Millennials ranked it as an important tech amenity.

The survey also asked consumers to rate 134 brands on three tech-related attributes: integration of technology into the ordering process, the ability to pay using technology and whether technology improved the guest experience.

Not enough chains offered payment technologies to merit inclusion in the report this quarter, but Rothman said it will likely be included in future reports.

Once again, the quick-service leader was Domino’s, with 60 percent of respondents saying its integration of technology for ordering is very good.

The Capital Grille, which offers its wine list on an iPad, ranked highest among full-service brands, with 54 percent of respondents deeming its ordering technology very good.

But when asked to rate restaurants on their use of technology to improve the guest experience, only 13 percent of consumers across all segments said the brand they visited recently excelled in that area.

“That’s strikingly low,” Rothman said, but it offers restaurants an opportunity, “especially as consumers, and particularly Millennials, are saying technology is something important to them.”

Ben & Jerry’s was ranked highest among quick-service chains on that attribute, with 25 percent of the vote. The ice cream chain has a mobile loyalty program called Euphoria Rewardia that lets users earn rewards.

Pollo Campero was the highest ranked fast-casual chain, with 26 percent. The chain, whose U.S. division is based in Dallas, offers online ordering, and customers can sign up to receive emailed coupons.

Cheddar’s Casual Cafe, which has an e-club loyalty program called The Cheddar’s List, won for full-service brands, with 22 percent.

Ratings on all of the tech attributes are expected to grow in importance as restaurant operators step up efforts to integrate technology into the guest experience, the report found.