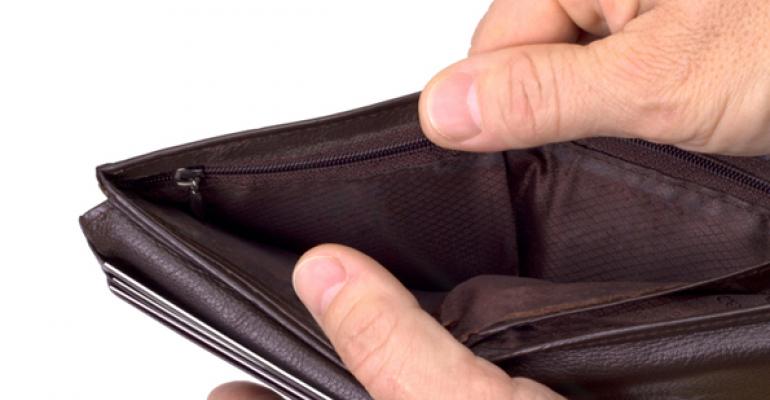 A restaurant dining divide created between higher- and lower-income earners

A survey of consumer optimism and spending intent released this week by Goldman, Sachs & Co. supported a growing dining-out divide between high-income consumers and lower- and middle-income patrons that is only expected to continue.

“Consumers in $90,000-plus households saw increased levels of optimism, while consumers in under $50,000 households declined,” Goldman Sachs analyst Michael Kelter observed. “This is, in fact, the widest spread we have seen between these two income groups in our survey.”

Spending habits showed a similar pattern, the Goldman Sachs survey found. While the total number of consumer respondents who said they spent more in the past three months rose slightly in the third quarter, the income divide was duplicated. Consumer households with incomes of $90,000 or more reported increasing spending in the third quarter versus the second quarter, while those in households with incomes of $50,000 or less reported decreased spending.

“Specific to restaurants,” Kelter said, “we saw an increase in the number of consumers who chose which restaurant to eat at based on price.”

The investment firm’s analysts found that this spending and optimism gap was rooted in the lifting of the 2-percent payroll tax holiday in January, and the related reduction in disposable personal income.

“We believe the culprit may be the $200 billion of tax increases that took hold in January of 2013, including the $125 billion related to the 2-percent payroll tax hike,” Kelter said. 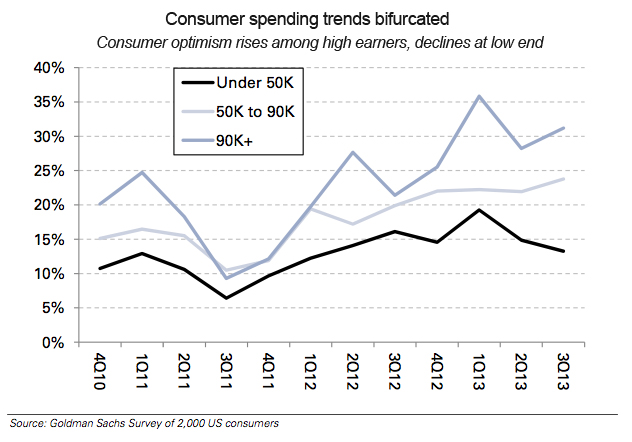 The Goldman Sachs survey found 61 percent of respondents indicated they had noticed the impact of higher payroll taxes on their paychecks. Of those, 42 percent indicated they were reducing spending. Only 19 percent said they would continue to spend at prior levels.

“Uncertainty is definitely a killer of sales,” he said.

Hourly worker income increases were about 2 percent this year, Knapp said, and the lifting of the holiday on Federal Insurance Contributions Act taxes for Social Security and Medicare “took that way, so they had no increase in income.

“In fact, if anything, they were negative because of inflation at 1.6 [percent] and health-care costs,” Knapp added. “So the hourly worker has less money to spend than last year.”

Knapp, who has termed the current income state as “Reallocation Nation,” said workers look at their income each month and their fixed expenses and parcel out what’s left over. The result, Knapp said, is consumers with higher incomes are not cutting back as much as those with lower incomes.

Kelter of Goldman Sachs said some restaurant brands are better insulated from the choppiness because of their appeal to higher-income customers, citing Outback Steakhouse parent Bloomin’ Brands Inc., The Cheesecake Factory, Chipotle, Panera and Starbucks.