But many customers continue to stay away

Concerns about food safety at Chipotle Mexican Grill have hit the lowest level of 2016, but the number of customers who say they’re eating less often at the chain’s restaurants remains high, according to a survey by William Blair.

Wall Street analyst Sharon Zackfia has been conducting monthly surveys of about 800 adults and their thoughts about Chipotle. In a report Tuesday, she said about 13 percent of respondents said they were “very worried” about food safety at Chipotle, a percentage that has steadily declined most months since January, when those concerns topped 20 percent. 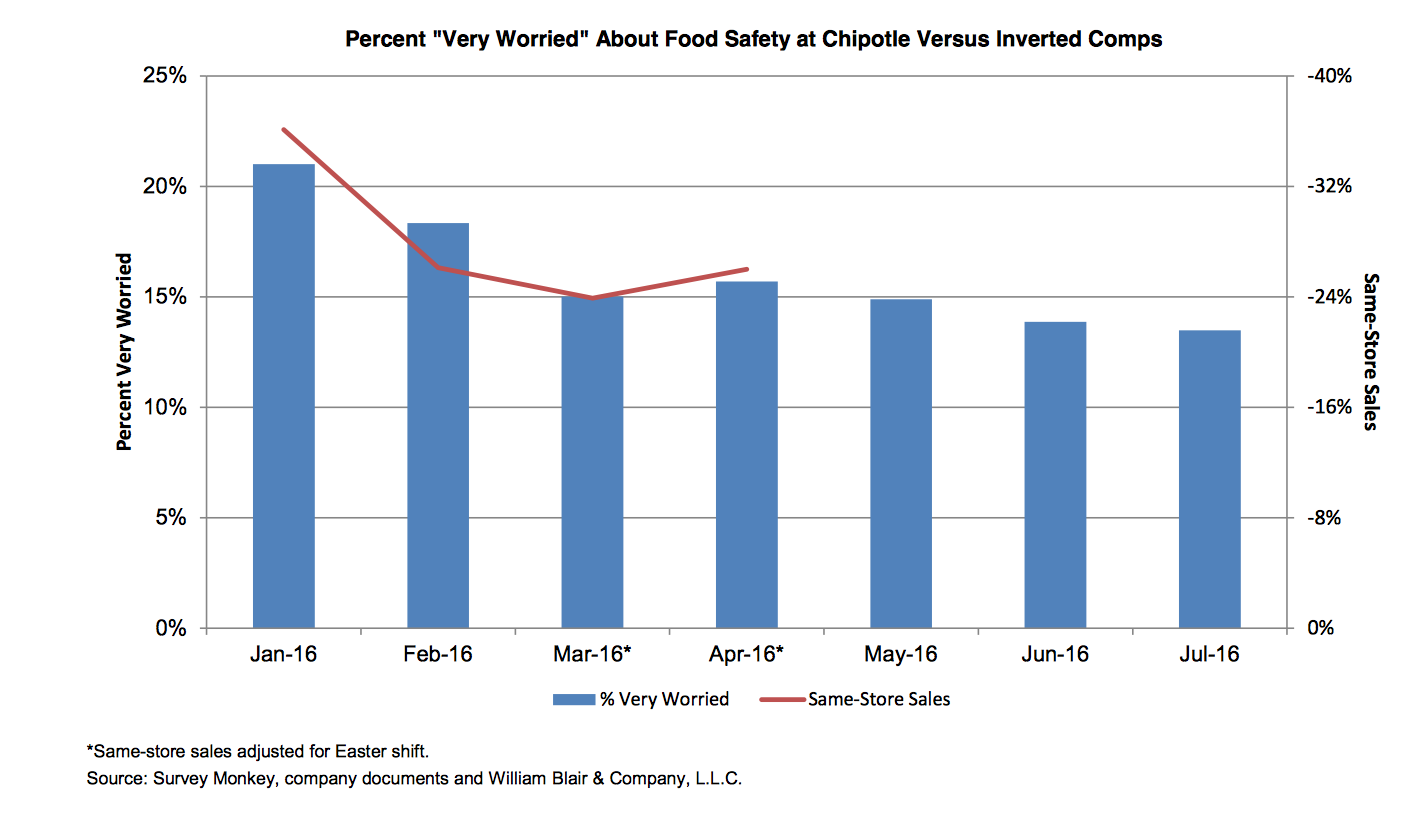 Conversely, those who said they were “not worried” or “not very worried” about food safety at Chipotle also reached a survey high of about 60 percent in July, compared with below 50 percent in January.

Dramatic improvement was seen in particular among respondents in the Northeast. The West Coast, where the outbreak first hit, remains the “most concerned” region, and those concerns appeared to uptick slightly in the July survey.

Still, about 45 percent of survey respondents said they are eating less often at Chipotle.

Roughly 26 percent of prior customers said they hadn’t eaten at Chipotle since the outbreak, though that was a decline from an earlier peak of 30 percent, Zackfia said.

The report noted, however, that awareness of Chipotle’s new safety protocols remains relatively low, with only 56 percent saying they were aware of measures the chain has taken to avoid another outbreak of foodborne illness like the ones that plagued the chain last year. It was a question the survey hadn’t asked before, so it’s unclear how much awareness levels may have changed.

“So far, Chipotle has shied away from specifically mentioning food safety in its marketing campaigns, which could represent an opportunity to accelerate the pace of the recovery based on our surveys,” the report said.

In the survey, 59 percent of respondents said new food safety procedures would encourage them to dine at Chipotle more often.

Only 16 percent said new menu items would increase their frequency of visits to Chipotle. Another 26 percent said nothing would encourage them to visit Chipotle more often.

The majority, however, or 59 percent, said they would increase their visits if no new illnesses are reported for “a while.”

Zackfia, meanwhile, is projecting Chipotle’s second-quarter same-store sales will be down 20 percent, an improvement from the nearly 30-percent decline in the first quarter this year. The chain is scheduled to report earnings on July 21.

Zackfia estimated that Chipotle’s comparable sales were in the negative high-teens in June, indicating a steady improvement as time passes.

Earlier this month, Chipotle launched a summer rewards program called Chiptopia that Zackfia said has resulted in longer lines and customer enthusiasm, based on her observations. That could bode well for a steeper rate of recovery in the third quarter, the report said.

Zackfia projected same-store sales would decline 12 percent in the third quarter and would turn positive in the fourth quarter this year.

“While we understand investors have been frustrated by the slower pace of recovery in the second quarter, we are optimistic that July could mark a turning point toward a faster pace of traffic improvement,” the report said.

Ultimately, Zackfia said she believes Chipotle’s sales and margins will recover. She projected average unit volumes would rebound to 85 percent to 90 percent of pre-outbreak levels by 2018, with restaurant margins reaching 24 percent, compared with 26 percent pre-outbreak, and earnings per share of roughly $15.