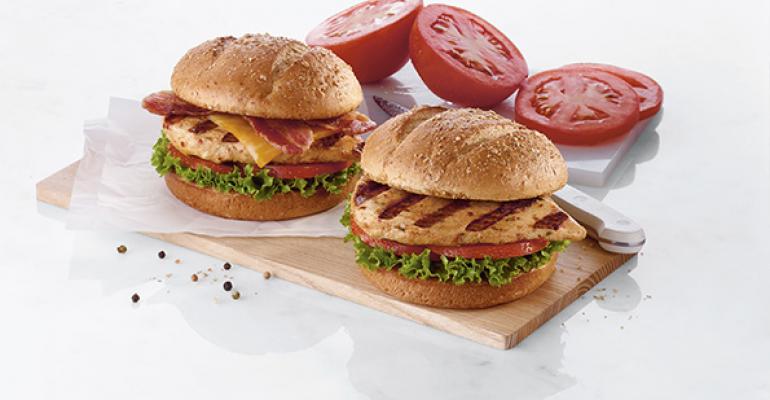 Chick-fil-A and Texas Roadhouse ranked highest among limited-service and full-service restaurant chains, respectively, in a recent survey of customer satisfaction rates, according to the American Customer Satisfaction Index, or ACSI, released Tuesday.

Across the industry, consumer satisfaction with full-service restaurants held steady compared with a year ago, but declining customer ratings among traditional quick-service chains like McDonald’s, Wendy’s and Burger King, as well as pizza delivery chains like Little Caesars, Domino’s, Papa John’s and Pizza Hut, dragged down the overall score for the limited-service segment.

“Consumers are going back to something that’s a little higher quality, even if they have to pay a little more,” Morgeson said.

The ACSI score, which is based on a 100-point scale, was developed from surveys of more than 5,000 consumers in January and February, who were asked to evaluate certain brands based on their market share. Consumers were asked to evaluate attributes like quality of food and beverage, order accuracy, courtesy and helpfulness of staff, layout and cleanliness of restaurants, speed, variety of menu items, and website satisfaction.

The limited-service segment saw its ACSI score fall 3.8 percent, to 77, its lowest score since 2010. 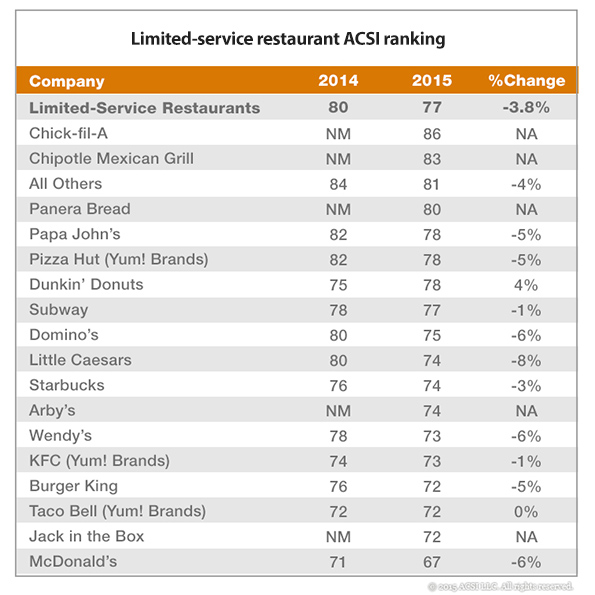 Chick-fil-A was a new entrant to the report, Morgeson said, but the quick-service chain snagged the top score, of 86, the highest score to date in the category.

Chipotle Mexican Grill, another new brand to the survey, also ranked highly, with a score of 83.

“They don’t try to be all things to all people,” he said. 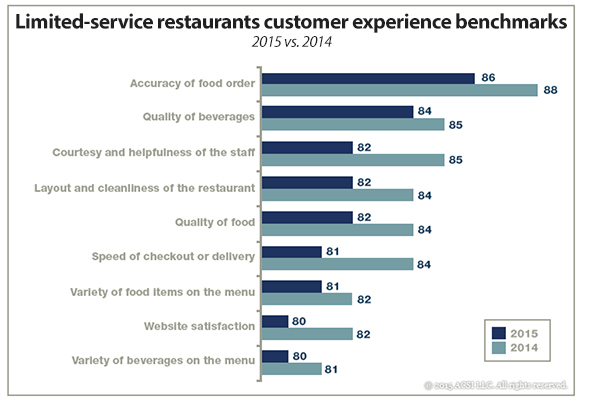 The report evaluates consumer rankings of smaller chains together, including In-N-Out Burger and Peet’s Coffee & Tea, as well as regional chains. The average among that category fell 4 percent, for an overall score of 81.

Panera Bread, another newcomer, received an index score of 80.

The top pizza delivery chains lost ground in terms of consumer satisfaction, according to the report, another indication that quality matters more to consumers than price, Morgeson said.

“There have been some price competitions going on between the delivery chains, and that may be having an effect,” Morgeson said. “It’s cheaper, but in an environment where people are looking for quality, it may be a sign they’re not getting what they expect.”

McDonald’s saw similar declines, sliding 6 percent, to 67, indicating that its turnaround efforts are not taking hold from a customer satisfaction standpoint, Morgeson said.

“McDonald’s has consistently been at the bottom of the chart,” he said. “That they’re down there isn’t terribly surprising, but that they’ve declined even more must be very disappointing for them.

“New players are coming in offering a better experience and price,” he added. “That’s a recipe for disaster, and McDonald’s is seeing that in terms of sales.”

Taco Bell held steady with a score of 72, although it was still near the bottom of the ranking.

“There was a time when they were the second-worst satisfaction company, just above McDonald’s,” Morgeson said. “In the early 2000s they started to climb, and they had a score of 77 as recently as 2012, but their customer satisfaction has slipped down to the low 70s.”

Starbucks, which has ranked highly in terms of food and beverage quality, saw a 3-percent decline in its score, to 74, largely due to perceived value, Morgeson said.

“The knock on Starbucks is that they’re a company that’s done very well in terms of quality, but people feel they’re paying too much for the product,” he said. With better coffee now available at competing brands, like Dunkin’ Donuts and McDonald’s, “the gap in the quality between their brand and others isn’t as big as it once was.”

Dunkin’ Donuts was the only limited-service brand in the survey that saw its consumer satisfaction score rise, increasing 4 percent, to 78, which the report attributed to the chain’s DDPerks loyalty program that launched in 2014, as well as its expanding reach into the western U.S.

Consumer satisfaction with full-service restaurants as a whole was the same as last year, with an overall score holding steady at 82. 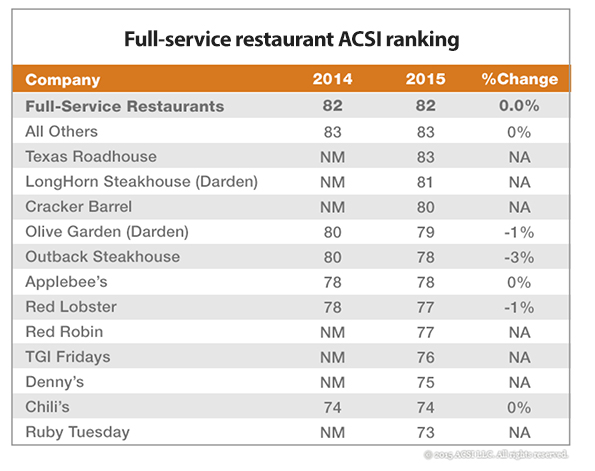 Texas Roadhouse led the category, with a score of 83. The report said that customers appreciated that Texas Roadhouse did not increase prices much, despite rising beef prices in recent years.

Competitor LongHorn Steakhouse was not far behind, with an ACSI score of 81. Outback Steakhouse, however, dropped 3 percent, to 78.

Cracker Barrel Old Country Store is another brand new to the survey. Customers ranked the family-dining chain with a score of 80, just shy of the industry average. 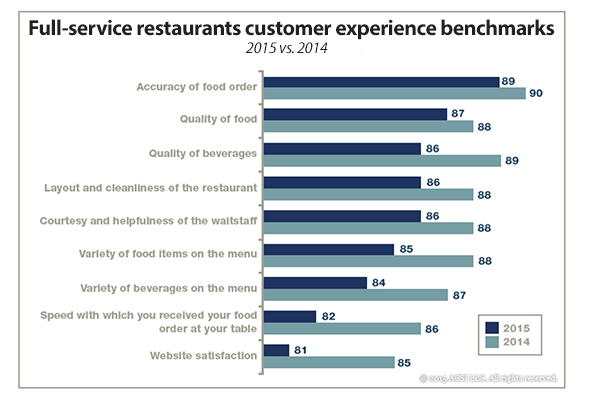 Olive Garden and Red Lobster, which have both been reworking their menus to reinforce the brand and streamline operations, lost customer satisfaction points, with a 1-percent decline for both brands.

Olive Garden’s score of 79 was the lowest since the brand entered the survey in 2007, Morgeson said.

Applebee’s held its score at 78, and Chili’s remained unchanged, at 74.

Newcomers Red Robin Gourmet Burgers, TGI Fridays and Denny’s all scored in the mid 70s, and new entrant Ruby Tuesday came in at the bottom, with a score of 73.

Across the full-service industry, customers indicated that their experience had deteriorated, the report found. Across all attributes, customer satisfaction declined.

“For the industry, the trend of tightening menus is causing diners to rate the variety of food and beverages lower than a year ago,” the report said. “While it is too early to tell how less menu variety will impact the customer satisfaction level of individual chains such as Red Lobster or Chili’s, there could be some benefit if simpler menus speed up service. At the industry level, the speed of food-to-table has declined 5 percent over the past year.”

Customer satisfaction with limited-service restaurants also declined across all attributes.

The report concluded that efforts to add menu variety slowed down checkout and delivery speed, “a hallmark for the industry that is deteriorating and falls 4 percent to 81,” the report noted.

Courtesy and helpfulness of staff also fell 4 percent, to 82, which could reflect the difficulty restaurants are having with recruiting and retaining motivated and qualified staff as the job market strengthens.

The report found that consumers ate out at an average of about four times per week, a rate that has not changed since the survey was conducted a year ago.

Morgeson said customer satisfaction does not directly translate to sales, but the scores tend to be cumulative.

“Once you see customer satisfaction degrade, it’s a warning sign that sales could suffer,” he said.