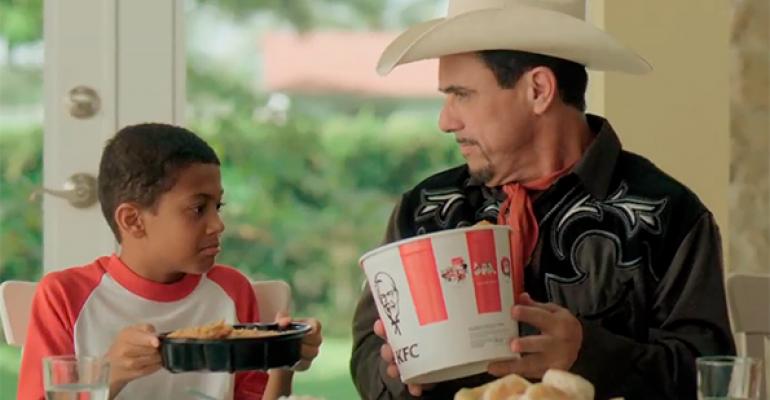 <p>The Hispanic community is one of the nation&rsquo;s fastest-growing consumer segments.</p>
Consumer Trends

U.S. Hispanic customer visits to restaurants are outpacing the demographic group’s population growth, according to a new report by The NPD Group.

In 2014, Hispanics’ per capita visits to quick-service restaurants and other foodservice outlets increased by 4 percent, compared with a 1-percent decline in visits by non-Hispanics, according to the Port Washington, N.Y.-based research firm’s “CREST Hispanic” report.

Restaurant brands such as Popeyes Louisiana Kitchen, KFC and Papa John’s Pizza are targeting marketing at the growing demographic.

Popeyes Louisiana Kitchen said earlier this year that it planned to target the growing Hispanic population across the U.S.

“We believe we have an opportunity to become even more relevant with this very fast-growing segment in the U.S.,” said Hector Munoz, Popeyes vice president and chief marketing officer-U.S. “We’re looking for creative, innovative ways to message to the Hispanic consumer. And that will consist of multiple mediums.”

In October, KFC launched a new campaign to appeal to the Hispanic market with an ad spot that represents how families, and the Hispanic community as a whole, can be united at the dinner table.

“Gathering together with family is at the heart of the Hispanic culture,” Rodrigo Coronel, spokesman for the Louisville, Ky.-based chain said. “KFC wanted to show how the different choices of a Favorites Bucket brings together a diverse Hispanic community, and everyone can meet at the table and enjoy the meal.”

“Hispanics typically have larger party sizes, more visits with children, which contributes to higher spending,” NPD said in a statement.

NPD noted that U.S. Hispanics exhibit what it called “brand-friendly behaviors,” including choosing chains (75 percent Hispanics versus 62 percent non-Hispanic) and dining out with children more often (40 percent of the time versus 29 percent for non-Hispanics).

NPD noted that Papa John’s, the quick-service pizza chain, began its Hispanic marketing efforts in 2006 by expanding its 24/7 online ordering capabilities to include a Spanish-language website. In 2014, the chain shifted more of the marketing focus to Hispanic consumers by growing its Spanish-language TV spending to 13 percent of its total marketing spending.

The CREST Hispanic study found that sales from Hispanic customers at Papa John’s grew 43 percent, traffic rose 18 percent, average eater checks went up $1.50, and items per eater moved from 2.07 to 2.25.

“We put a Spanish-language strategy in place, but the message hasn’t had to change,” John Schnatter, Papa John’s CEO, said in a statement. “Papa John’s goal of bringing family and friends together resonates with Hispanics who are very focused on getting together with family.”

“We just needed to communicate to Hispanics in a way they understood in order to build their confidence in the Papa John’s brand,” he said.