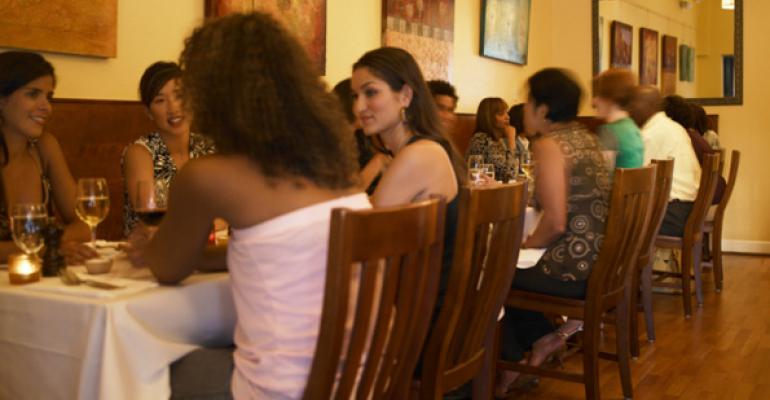 Smaller restaurant chains are gaining in customer satisfaction scores as larger chains slip, according to a report released Tuesday by the American Customer Satisfaction Index.

The Ann Arbor, Mich.-based ACSI, which was founded at the University of Michigan, discovered in its 2013 survey that customer satisfaction for smaller full-service restaurant chains rose 2.5 percent, to an ACSI score of 83 out of 100, and helped the category. Limited-service restaurants remained at 80 for a third consecutive year.

Among the large chains, Red Lobster saw the biggest fall, with a 6-percent decrease to 78. Applebee’s Neighborhood Grill & Bar declined 4.9 percent, to 78, and Chili’s Grill & Bar fell 5.1 percent, to 74.

“In a weaker economy, consumers respond to price, but as the economy improves, quality becomes more important to restaurant customers,” said Claes Fornell, ACSI chairman and founder, in a statement. “This is good news for smaller chains and individual restaurants, which customers associate with higher-quality food and better service.”

The improving scores for smaller chains helped offset the declines in the large chains, the ACSI found. Customer satisfaction with full-service restaurants as a category edged up 1.2 percent, to an ACSI score of 82, holding a slim lead over fast food, which had a score of 80.

“This is a considerable transformation for an industry that posted scores in the 60s throughout the 1990s and never exceeded an ACSI score of 70 until 2001,” said David VanAmburg, ACSI’s director. 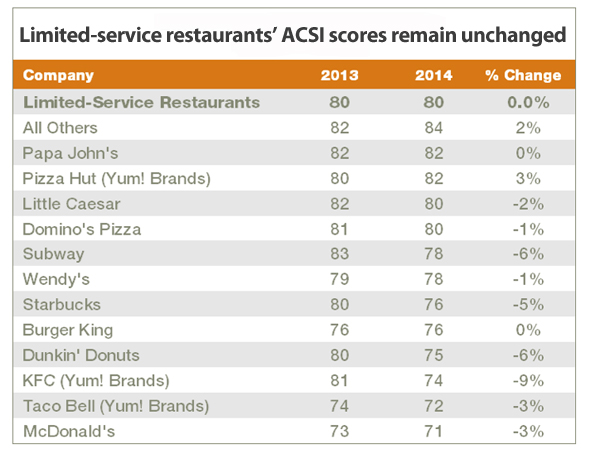 “Price has always been a strong point for fast food,” VanAmburg said, “but fast-casual restaurants have been improving quality and service at such a brisk pace that customer satisfaction with fast food is nearly as high as dine-in restaurants.”

Smaller was better for quick-service restaurants too, and the aggregate ACSI score of restaurants with fewer units climbed 2.4 percent, to 84, offsetting declines for many of the largest fast-food chains.

ACSI said the group of smaller chains included brands like Panera Bread and Chipotle Mexican Grill, maintaining the entire limited-service category at the highest level of satisfaction since the Index’s inaugural year of 1994.

Pizza brands dominated the highest-ranked brands. Papa John’s Pizza was at 82, unchanged from the prior year, and Pizza Hut rose 2.5 percent to share the lead. Little Caesars fell 2.4 percent, to 80, tying Domino’s Pizza, which fell 1.2 percent.

Subway fell out of the top spot, dropping 6 percent, to 78. That tied Subway with Wendy’s, which fell 1.3 percent.

Both the full-service and quick-service restaurant segments compared favorably with most other service providers now and in the recent past. VanAmburg said manufacturing industries generally score better than restaurants in the ACSI survey.

“Historically looking back to the late 1990s and early 2000s, fast food was mired in the mid- to high 60s and low 70s” in ACSI scoring, Van Amburg said, noting that the survey did not add full-service restaurants to the index until 2007.

“It was not until about the last three to four years that we have seen consistent scoring at 80 or better, which is by absolute standards a good score in ACSI,” he said.

The overall ACSI uses data from interviews with about 70,000 customers each year to analyze customer satisfaction with more than 230 companies in 43 industries and 10 economic sectors, as well as more than 100 services, programs, and websites of federal government agencies.