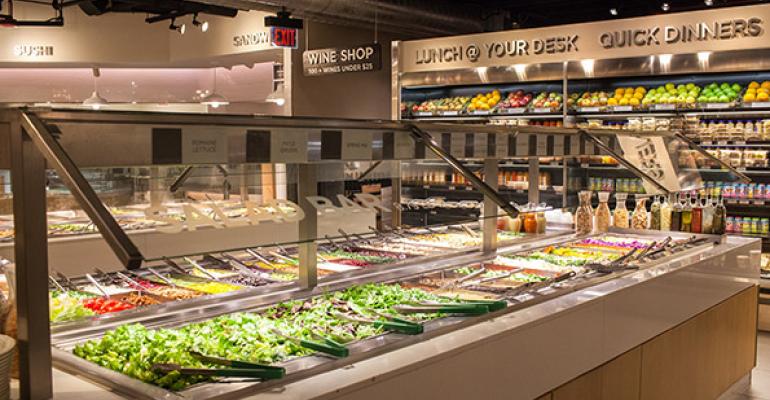 Visits to grocery stores for in-store dining or take-out have risen 30% since 2008, The NPD Group finds

Sesame garlic eggplant, chili lime chicken, slow roasted barbecue sandwich. These are just a few of the high-quality, often better-for-you, freshly made foods that are increasingly luring consumers to purchase prepared meals at their local grocery store instead of their favorite quick-service restaurant.

“We have so many options. It’s just one more thing cutting into consumers’ restaurant visits,” said Bonnie Riggs, an analyst with market research firm The NPD Group. “It’s a battle for market share, and it looks like some of the non-food concepts are winning.”

According to new data from Port Washington, N.Y-based NPD, visits to grocery stores for in-store dining or take-out prepared foods have grown 30 percent since 2008.

In the 10-month period ended December 2015, NPD found that more than 40 percent of the population purchased prepared foods from a grocery store, compared to 77 percent from a quick-service restaurant. 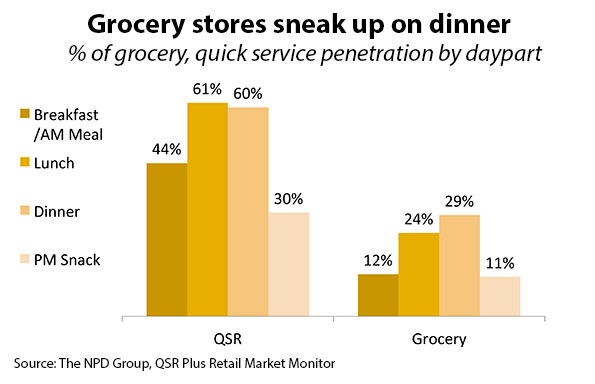 In a four-week period, consumers made an average of five visits to a grocery store for prepared foods, compared to about 14 visits to quick-service restaurants. While the purchase rate at grocery stores lags behind quick-service eateries, Riggs notes that it is still impressive, given that grocery has significantly fewer locations than quick service.

Perhaps the most concerning research for quick-service restaurant operators is that grocery outlets are going after their best customers, NPD found. According to NPD’s QSR Plus Retail Market Monitor data, grocery prepared-food buyers are above-average quick-service restaurant users. In addition, the heaviest grocery buyers account for nearly 30 percent of grocery visits (about seven per month) for ready-to-eat meals.

The greatest weakness for quick-service restaurants in competing with grocery stores is dinner, NPD found. Dinner is most important, followed by lunch, for visits to grocery stores.

“I don’t think QSR operators realize the magnitude of their vulnerability, especially at dinner, the daypart they have the greatest challenges,” Riggs said.

Convenience may be driving consumers to grab more prepared meals to go, but the reason they are increasingly getting those meals from a grocery stores is all about quality, variety, freshness and healthy options. According to NPD satisfaction surveys, these are the factors consumers look for in prepared meals — and the ones they say grocery stores are delivering best.

While some restaurant operators remain unsure of just how vulnerable they are, supermarket chains and savvy restaurant groups are altering their business models to meet consumers’ growing demand for quality, fresh and affordable prepared meals. Among those brands are Cincinnati-based Kroger Co., one of the nation’s largest supermarket operators, and Lettuce Entertain You Enterprises Inc., a Chicago-based restaurant group.

Kroger Co. is making a serious grab for customers in search of a quality, quick, affordable meals with the February opening of its first Main & Vine store in Gig Harbor, Wash.

As reported in Supermarket News, the 27,000-quare-foot store is focused on fresh produce and prepared foods at affordable prices and is being billed by Kroger’s as "where eating is healthy, affordable and fun."

According to the Main & Vine website, the store offers four different stations for prepared foods where customers can order and then take out or eat in the café: build-your-own bento boxes and dumplings, oven-baked hand tossed pizza, made-to-order salads and sandwiches made with in-house roasted meats. There’s also an event center for food and beverage tastings, cooking demonstrations and more.

“The Gig Harbor Kitchen has your fresh eats fix! Our Chefs are busy cooking up delicious meals for you all day long,” the website says. “Stop in to grab something when you’re on the go, or order your favorite item and hang out with us for a while.”

The Market at Beatrix

While some restaurant operators are shifting their menus to beat grocers at their prepared foods game, others, like Lettuce Entertain You Enterprises (LEYE), have taken the approach of joining them.

Last October, LEYE opened The Market at Beatrix on the campus of Northwestern Memorial Hospital in Chicago. The 1,200-square-foot market is a prepared foods mecca, offering multiple hot and cold bars, a variety of soups, and cases filled with freshly prepared grab-and-go food and beverages. Most of the items are better-for-you selections made in the Beatrix’s in-house kitchen, while many others come from carefully chosen local food artisans.

“We’re seeing that [prepared foods] trend, especially among Millennials,” said Marc Jacobs, vice president and partner at Lettuce Entertain You Enterprises. “When you can get quality restaurant food ready to go—that’s what people get excited about.”

The Beatrix isn’t LEYE’s first foray into a prepared food concept. It also operates Foodease, a retail market concept opened in 2010 at Water Tower Place in Chicago that features American and Asian fare, including popular dishes from various LEYE restaurants. With business at The Beatrix and Foodease continuing to grow, Jacobs says the company plans to expand both concepts.