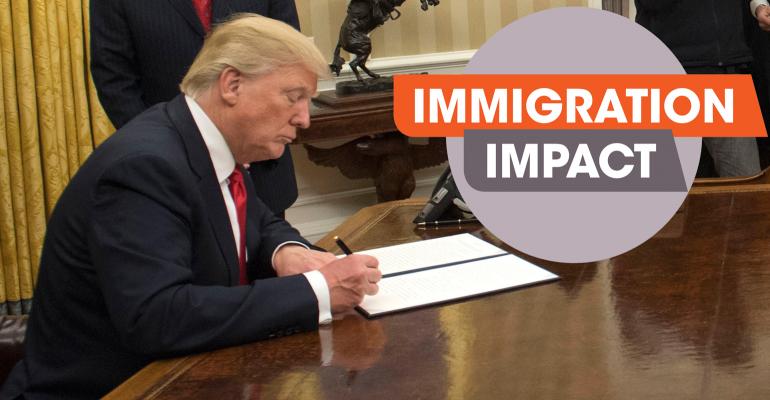 The Trump Administration has reworked its controversial executive order on travel to the U.S., restricting travel for 90 days from six Middle Eastern countries while curbing the number of refugees who will be allowed into the country.

Nevertheless, the travel ban has sparked concern that it could hurt the economy by restricting tourism to the U.S. — a business upon which many in the restaurant industry depend.

In a statement on Monday, the National Restaurant Association called for a “balance” between security and the economy.

“We remain concerned about the negative impacts any executive order may have on our economy and American small business,” Cicely Simpson, executive vice president at the association, said in a statement. “The National Restaurant Association has always advocated for stronger border security and enforcement measures that keep Americans safe.

“However, we must balance our safety and security with the importance of economic contributions of travel and tourism to our country, as we are already seeing negative effects the executive order is having on our economy.”

The administration in January issued an executive order temporarily suspending travel to seven countries, an order that sparked nationwide protests and legal challenges that ultimately led a judge to halt the order.

The new order, signed Monday, restricts travel from six countries — Iran, Somalia, Yemen, Syria, Sudan and Libya — for 90 days. The reworked ban does not include Iraq, and it keeps existing visas from those countries in place. The White House said the order was designed to protect the country from terrorist activities from foreign nationals who are admitted to the U.S.

Iraq was removed from the list of restricted countries after taking steps to improve travel documentation, information sharing and the return of Iraqis subject to orders of removal.

The administration said that the 90-day delay would give the country time to review existing screening and vetting procedures. The order said the countries are either state sponsors of terrorism, have been compromised by terrorist organization or have active conflict zones.

Yet the travel restrictions have already reduced tourism to the U.S. According to the consulting firm Forwardkeys, travel to the U.S. from foreign countries fell 6.5 percent from Jan. 28 through Feb. 4.

The reduction was strongest in visitors from the Middle East, but was evident in most parts of the world outside of Eastern Europe and the Americas.

Travel increased by 2.2 percent between Feb. 5 and Feb. 16, after the ban was suspended. But travel fell again after Feb. 17, after President Trump promised new restrictions, according to the firm.

Tourism officials in New York City have estimated that travel will fall by some 300,000 visits this year.

In a survey in February by the Global Business Travel Association, 31 percent of travel professionals said they expect the restrictions will cause a reduction in their companies business travel.