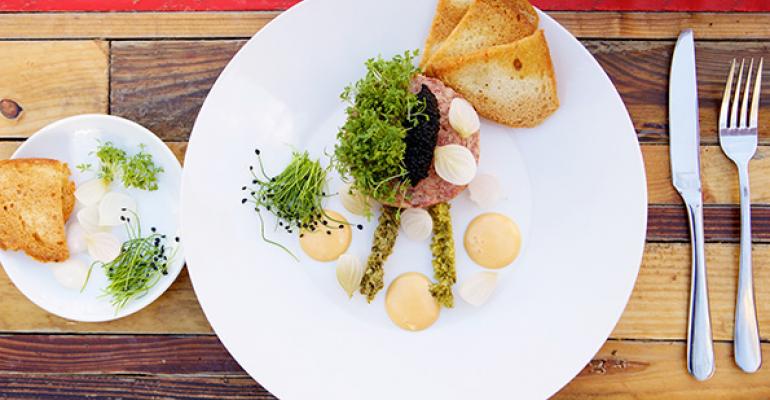 Craft products, convenience will be important factors next year

Technological advances are making life both easier and more fast-paced for Americans, who are trying to do more while seeking balance in their lives, according to Mintel.

In a new report, the research firm’s consumer trend consultants Stacy Glasgow and Jenny Zegler recently laid out what they see as the four key factors that will affect the United States market next year.

Those trends include an interest in feeling more connected to what they’re buying, and wanting to feel better about the companies they’re buying from. Below, NRN outlines Mintel's trends and provides restaurant applications for them.

Extreme behavior is becoming more commonplace as services and experiences proliferate, Glasgow said in a report.

She cited TV binge watching — watching multiple episodes of a series in one sitting — as one example. She also pointed to growing interest in unlimited access to things for a set fee. For example, 21 percent of adults who attend live events would consider paying an annual subscription to a venue to see multiple events there, according to Mintel.

This type of behavior Mintel outlined in the report can be applied to foodservice. Restaurants are seeing the extreme behavior in limited-time offers, such as CKE Restaurants’ All-American Thick Burger, offered around July 4 and featuring a hamburger topped by a hot dog and potato chips. Interest in unlimited access at a fixed price can be seen in the popularity of Olive Garden’s unlimited pasta pass, which allowed guests to buy seven weeks’ worth of “endless” all-you-can-eat pasta for $100.

The 1,000 passes made available last year sold out in 45 minutes. Those have-it-all options will be balanced in 2016 by a sort of cooling off period. For example, while “bacon is all the rage, yet so are juice cleanses,” Mintel said in its report.

There is also room for indulgences that aren’t too indulgent, however, such as the Mini Frappuccinos that Starbucks introduced earlier this year, Mintel said.

“In the aftermath of the global financial crisis, consumers have exchanged the ‘bigger is better’ mantra for right-sized purchases and supporting small businesses,” Zegler wrote.

That has been reflected in the growth of farmers markets and web sites such as Etsy where consumers can buy handmade items from producers they feel they know better.

She said larger companies have the opportunity to create products that have that small-business look and feel.

“Regardless of the company’s size, genuine stories help to form relationships that give consumers the security that products are worthy of their investment and loyalty,” she said.

In food and beverage, this behavior can be seen in the proliferation of craft beer and spirits, something that companies large and small have capitalized on. For example one of the most popular craft beers, Blue Moon, is owned by brewing giant MillerCoors.

“Niche is no longer a limitation, nor is it an opportunity reserved for small companies. We’ve entered an era where the power of the story and the authenticity of the connection supersedes any lofty moral aspirations such as ‘shopping small,'” Zegler said.

The use of images in marketing, and for communicating in general, is reaching a new level, according to Glasgow.

That includes Buyable Pins on the social media platform Pinterest, which lets people buy things that look desirable with the click of a button. More broadly, this visual trend includes the growing popularity of emojis in communicating.

“In the coming year we will see the launch of several highly anticipated [virtual reality] systems,” she added.

“Brands risk being left behind unless they find ways to leverage these universally quick and comprehensible visual media,” she said.

Domino’s Pizza has tapped into visual media with the introduction in June of new text ordering capabilities, including emoji, this past June.

Registered customers can order pizza simply by sending the pizza emoji to DPIZZA (374992).

“Shifts in the traditional definitions of gender, race and other formerly standard demographics are reforming our culture,” Zegler said. “These changes are increasing the number of equality-focused consumers who expect that products, advertising and corporate policies will reflect the new reality of the population.”

Companies have responded by removing gender-based categories for children’s toys, such as dolls for girls and action figures for boys, and having same-sex couples and transgender celebrities appear in advertising.

The notion of inclusion is increasingly important among the post-Millennial generation, Mintel found, noting that 83 percent of kids and 88 percent of teenagers agree that “it is important to accept people with different racial or ethnic backgrounds,” Zegler said.

“It is likely that communication will grow beyond traditional perceptions of demographics and lead to more prominent reflections of seniors, people with disabilities, immigrants and the less educated,” she said.

A number of restaurants showed their support for marriage equality in June, when the Supreme Court legalized same-sex marriage across the country.

Howard Schultz, chairman and CEO of Starbucks, which has long been a supporter of marriage equality, released a short video saying how proud he was to be an American. Ben & Jerry’s renamed its Chocolate Chip Cookie Dough ice cream “I Dough, I Dough” for the summer.