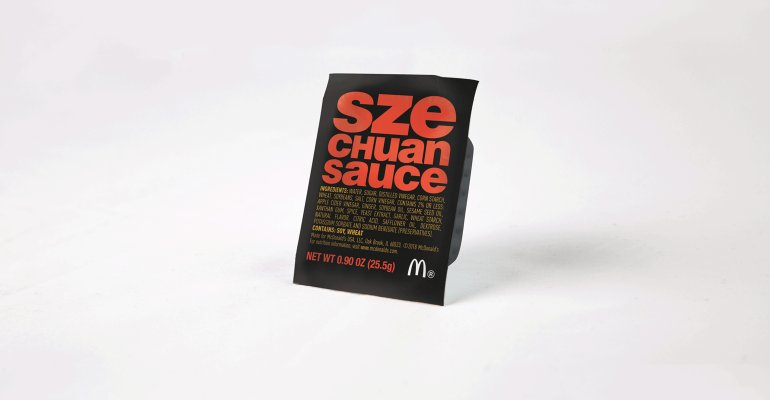 McDonald’s to bring back Szechuan Sauce

Return on Feb. 26 aims to remedy October shortage for a hot minute

McDonald’s Corp. will make a second run on Monday at promoting its once elusive Szechuan Sauce, this time increasing production 5,000 percent to avoid the long lines of disappointed customers it experienced in October.

The Oak Brook, Ill.-based quick-service operator suffered angry protests, especially from fans of the “Rick and Morty” cartoon that made the sauce chic again, when it ran out of Szechuan Sauce in an Oct. 7 promotion.

This time, rather than the October promotion’s 4,000 packets of Szechuan Sauce distributed at 200 locations, McDonald’s has produced 20 million cups and will offer them at all U.S. restaurants. (The October promotion averaged a mere 20 packets per restaurant, for those doing the math at home.) “It’s no secret McDonald’s well-intentioned release of its super-limited batch of Szechuan Sauce last October wasn’t enough to meet demand of its fans,” a company spokesperson said Thursday, adding that the sauce pairs perfectly with the chain’s Buttermilk Crispy Tenders.

“We did not anticipate the overnight crowds, the cross-state travel and the amazing curiosity, passion and energy fans showed,” the company said on a microsite, WeWantTheSauce.com, created for its second stab at the Szechuan promotion.

“Our super-limited batch, though well-intentioned, clearly wasn’t near enough to meet that demand,” the company said. “We disappointed fans, and we are sorry. To fully make amends, we felt it was important to not only bring back much more sauce this time, but to also admit our mistakes, answer questions and give fans access to the story behind the story.”

McDonald’s partnered with [email protected] and Onion Labs, as well as host Catherine LeClair, to produce an investigative podcast called “The Sauce,” which is available for various operating systems at the microsite.

oh dip it's here! listen to The Sauce to find out how the Szechuan Sauce riots of 2017 came to be and get my OFFICIAL review on how it tastes (yes i ate expired sauce): https://t.co/rud0HkepN4

Cabrera admitted McDonald’s was “living in a post-sauce world” and needed to make things right, especially with fans of “Rick and Morty,” the Cartoon Network show that spoofs the “Back to the Future” movies.

In one of the three-part podcasts, Haracz said McDonald’s scaled up production of the sauce, spreading it among several suppliers in order to get the 20 million cups now on hand.

“We can’t wait for our fans to taste the savory, sweet flavor of Szechuan Sauce paired with our craveable and delicious Buttermilk Crispy Tenders, and hope that ‘The Sauce’ provides you with some answers, and a bit of entertainment from one of the most humbling stories yet,” the company said.

McDonald’s has more than 37,000 restaurants in more than 100 countries.