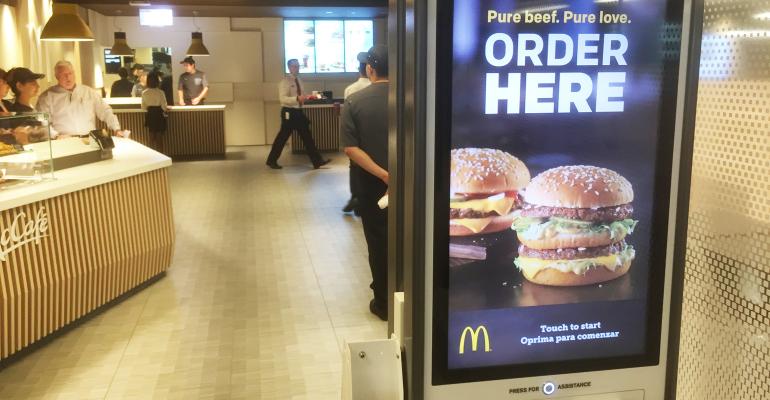 McDonald’s Corp. plans to add curbside service, mobile ordering and payment at all 14,000 U.S. restaurants by the end of the year, the company said Wednesday.

Speaking to analysts and some media members in Chicago, McDonald’s executives also said they plan to speed up the development of its kiosk-based “Experience of the Future” restaurants in the U.S.

The company plans to have the kiosks in 2,500 locations by the end of the year, and in most of its domestic locations by 2020.

“Technology is disrupting everything around us,” CEO Steve Easterbrook said. “The question for McDonald’s: Do we want to be disrupted, or do we want to be the disruptor?”

The announcements came as the company and its executives presented a dramatically different version of McDonald’s, including significantly more digital capabilities, a more efficient kitchen operation system and improved food quality.

The efforts intend to win back customers lost over the past five years, executives said. McDonald’s said it has lost 500 million transactions in its important U.S. market since 2012.

Most of those customers have been lost to quick-service competitors.

Executives vowed to use McDonald’s immense size and scale — despite those losses, it is by far the largest restaurant brand in the U.S. and in the world — to reverse traffic declines.

Using more technology inside restaurants could improve efficiency and expand the customer base, the company said, particularly during peak hours, when overflow lines drive some customers away.

McDonald’s said curbside service would work with its mobile app to provide an entirely new delivery system. Diners can order on the app, which includes geofencing capabilities that can tell when a customer shows up at the restaurant.

If customers choose curbside service, they would park in a designated slot, and their order would be brought to the car.

The app would also work with the drive-thru. Executives said the app could speed drive-thru service by reducing order times for a certain percentage of customers.

Meanwhile, the “Experience of the Future” lets customers order on kiosks inside the restaurant. The service could include table service.

Executives said restaurants with the kiosks generate sales growth of 4 percent to 8 percent.

McDonald’s would use incentives to encourage operators to add the kiosks quickly, executives said. The sooner operators add the experience, the more incentives they would receive.

In addition, McDonald’s also indicated they were jumping into delivery with both feet. The company is testing delivery in the U.S., in Florida, with UberEats.

Chief strategy officer Brady said orders through the service come frequently via the drive-thru and during off-peak hours, making it highly incremental.

“In my opinion, it’s the most significant disruption in the restaurant industry in our lifetimes,” she said.