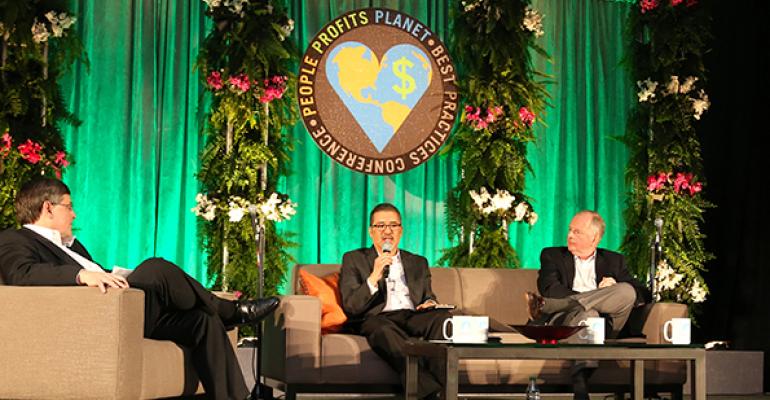 Recent restaurant sales and traffic comparisons, as well as trends in the general U.S. economy, are fueling industry optimism for 2015, attendees at the Global Best Practices Conference were told this week.

The conference, which took place Sunday through Tuesday in Irving, Texas, was sponsored by Dallas-based analytics firm TDn2K.

“The optimism for the economy is not just that growth will be strong, but that it will generate more income and more demand for the industry,” said Naroff, president of Naroff Economic Advisors, a strategic economic consulting firm. “In essence, I’m really optimistic about the direction of the industry itself.”

Victor Fernandez, executive director of insights at TDn2K, who presented data at the conference’s “2015 State of the Industry” panel, said, “For 2014, it was a good year for the restaurant industry. We ended with 0.8 percent up in comp sales. It’s not the exciting, but that is about a one-percent increase over last [year], which was actually negative.”

Extreme winter weather hit many sections of the nation in the first quarter of the year, Fernandez said, but industry sales growth accelerated through the rest of year.

Fernandez said he was impressed by the industry’s same-store traffic numbers.

“We got to positive in December, and for the second time since we started reporting six years ago we had flat to slightly positive comp traffic,” Fernandez said. “That growth and that speed is being sustained by fundamental economic changes. It’s not just prices. It’s not just promotions. It’s really the economics behind it that are working in our favor. That’s something that is really exciting.”

The effect of falling consumer gasoline prices may not yet be reflected in the positive sales and traffic numbers, panelists added.

Panel moderator Stephen King, CEO of Dallas-based Dave & Buster’s Inc., noted that many attendees of the ICR XChange conference in Orlando, Fla., the previous week speculated on the effect of falling gas prices.

But Naroff and Fernandez said they expected the effect of declining gasoline prices to be more long term.

“The expectation is — depending on how low gasoline prices stay this year — we’re looking at somewhere between $100 billion and $200 billion going into the additional spending capacity of households,” Naroff said.

However, Naroff added that it would take time to trickle into the industry.

“It’s going to take a while for households — and this is a psychology issue — to feel that the funds that they are getting are a little more permanent,” he said. “Households have learned through the years that gasoline prices go down, but they don’t stay down. So until they start seeing that there’s a more extended period of lower gasoline prices, that impact on additional spending, including going out to restaurants, will be fairly limited.”

If gas prices stay low for an “extended period of time,” the effect will be seen, he said.

Fernandez said he hasn’t seen the effect of declining prices appear in Black Box Intelligence data, especially in increased traffic numbers. However, once consumers get into restaurants, he said, the potential is for them to spend a little more than they might have in the past.

As the economy improves, Naroff warned restaurant operators that they should expect to start paying higher wages to draw and retain workers.

“You’ve really got to start planning for those costs to start rising,” he said.

However, he added, with increased earnings in general, consumers — especially Millennials — will likely spend more in restaurants.

Naroff cited surveys that found “Millennials think that eating out — however that may be defined — is a necessity not a luxury. So they will be eating out more in one form or another.”