Flavor of the Week: Wings without the chicken — cauliflower wings 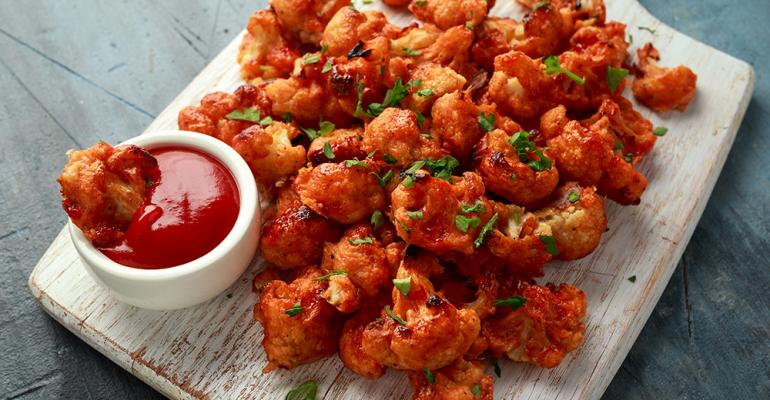 Cauliflower, the cruciferous vegetable being used as a low-carb option for pizza crusts, rice, pasta and more, is also becoming a tried-and-true replacement for meat in spicy appetizers.

So-called “cauliflower wings” are typically lightly breaded and then either baked or fried before being tossed with sauce and usually served as an appetizer, often side-by-side on the menu with Buffalo wings or other chicken wing preparations. They’ve become so widespread that even chicken experts like Buffalo Wild Wings have introduced them to their menus, and the pizza chain Donatos has done away with all pretense and introduced roasted cauliflower florets, with no breading or other attempt to disguise them as wings, and called them “cauliflower wings” anyway.

Cauliflower wings are in the Adoption stage of menu research firm Datassential’s menu adoption cycle, meaning that they are gaining traction in foodservice but are still seen as somewhat unusual, appearing in venues such as specialty retailers and progressive fast-casual chains.

Click through the gallery to learn more about the latest Flavor of the Week and get inspiration from one restaurant using Cauliflower Wings on its menu.