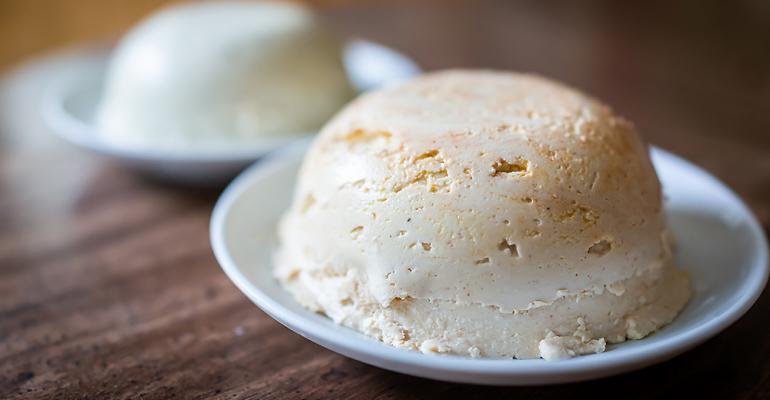 Vegans remain a small percentage of the American population, but a growing number of people say they’re trying to eat less meat and dairy, whether that’s for reasons of health, lowering their carbon footprint, being kinder to animals or whatever other motivations they may have. In fact, most vegan restaurants say that the majority of their customers are meat-eaters. So perhaps it stands to reason that they would offer menu items that omnivores crave, such as food that resembles cheese.

Non-dairy, plant-based cheese analogs, therefore, are on the rise. The base for these vegan cheeses can vary depending on the desired product. They can be made from nuts — sometimes processed nuts that are pulverized to resemble cheese, and sometimes nut milks that are curdled and aged in a fashion similar to dairy cheese. They can also be made from soybeans, nutritional yeast, tofu, modified food starch mixed with oil, and more.

Manufacturers of vegan cheese have made great strides in the past few years and have gotten better at mimicking the textures of a wide variety of cheeses, such as mozzarella, Parmesan and cream cheese.

Market research firm Datassential reports that there is a high awareness of vegan cheese among Gen Z and Black consumers. The firm also says that vegan cheese appears on 200% more menus throughout the United States now than it did four years ago.

Click through the gallery to learn more about this edition of Flavor of the Week and see menu inspiration featuring vegan cheese.