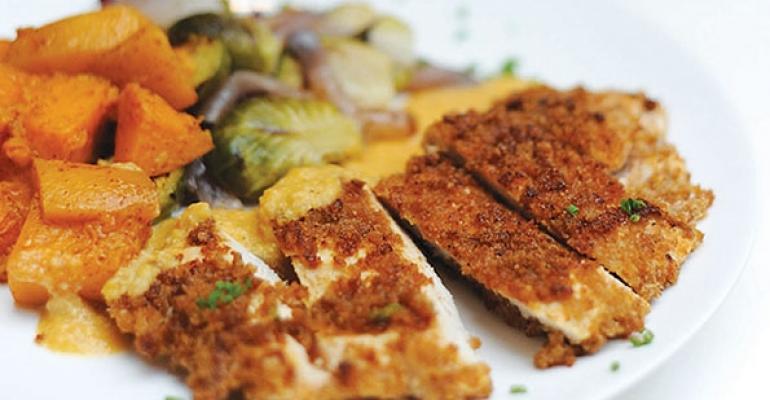 <p>LYFE Kitchen specializes in flavorful meals made with organic and locally sourced ingredients and responsibly raised meats, including its Unfried Chicken.</p>
Consumer Trends

They’re young, educated, largely female and often Hispanic, and you can find them living in every region of the country. They’re self-described “clean eaters,” and they’re having a notable impact on what shows up on grocery shelves and restaurant menus.

While clean eaters represent just 5 percent of primary grocery shoppers, a new study from Port Washington, N.Y.-based NPD indicates that this small but influential group has the potential to grow in the coming decades.

This group tends to define clean eating by what isn’t in their food, such as chemicals, preservatives, pesticides and additives, NPD found. And they aren’t whom you might expect. Clean eaters are male and female, but 58 percent are female. One quarter of clean eaters are ages 18 to 34, but the majority are ages 35 to 54. Eighteen percent are Hispanic, a group that tends to favor fresh, natural and scratch cooking, even if they are acculturated.

Clean eaters live not just in major cities on the east and west coasts, but in all regions of the country. More than 65 percent have household incomes of $45,000 or more. Some have more than a college education and others less. More than half of clean eaters are married, and 38 percent live in households with children. They mostly eat clean at home, but younger adults are more likely to eat clean away from home than are older adults.

No matter where they purchase their clean items, clean eaters are willing to pay more, NPD found. How much more has a lot to do with a consumer’s age. Overall, primary grocery shoppers are willing to pay an average of 14 percent more for clean items than “regular” items. The percentage increases to around 25 percent among clean eaters and Millennials, NPD discovered.

“Willingness to pay more says that clean eating is a bit more of a priority to young adults,” Seifer noted.

“When we think about where the demographics are pointing, those skews indicate [clean eating] might have legs … be here to stay for a while,” Seifer said.

In addition, NPD also found that some individual elements of clean eating are growing, including the per capita consumption of organic items.

“Only 20 percent of consumers are aware of clean eating, but as more become aware, we might find more people identify as clean eaters,” Seifer said.

The influence of clean eaters on the restaurant industry is already showing up as more chains, including most recently Subway, have announced plans to eliminate additives such as artificial ingredients from their menus, or offer additive-free proteins. Below Memphis, Tenn.-based LYFE Kitchen and Beaumont, Texas-based Jason’s Deli, two chains already ahead of this trend, share some their success in appealing to clean eaters.

At this growing, better-for-you, fast-casual chain, the key to appealing to clean eaters or those that adhere to the elements of clean eating is choice.

“LYFE Kitchen’s unique selling option is choice, the United Nations approach, where there is something for everybody,” said Michael Donahue, co-founder and chief brand officer.

The 18-unit chain, which specializes in flavorful meals made from organic and locally sourced ingredients and responsibly raised meats, has a diverse main menu, as well as separate vegan, vegetarian and gluten-free menus.

To attract its core customer — women ages 19 to 49 — LYFE does a lot of sampling in stores, community tastings and partnerships, and strives for earned rather than bought media. That said, Donahue noted that a large portion of those who want to eat clean — or vegan, or gluten-free, or vegetarian — have a way of finding LYFE all by themselves.

Ever since one of the owners of Jason’s Deli decided to go on a personal mission to eat better, the sandwich chain has followed suit, leading the industry in removing additives from its menu, such as trans fats and high fructose corn syrup, and, most recently, artificial colors — and customers have followed.

“[Clean eaters] have always been a vocal minority,” said Jamie Cohen, chief branding officer for the 260-unit chain. “And they’ve long been coming to Jason’s.”

These days, clean eaters are coming even more for the chain’s “high quality” offerings, Cohen said. For example, they come for the Meatless Eats section of the menu, which features meat-free pastas, sandwiches and salads; the 31-item salad bar (the No. 1 selling item on the menu); and the gluten-free menu, with items such the popular gluten- and antibiotic-free J.D. Chicken Nuggetz.

The chain’s most recent clean eating effort is a partnership with the MD Anderson Center Division of Cancer Prevention & Population Sciences to create several limited-time offers under 500 calorie, including the current MDA Quinoa Shrimp and Mango Salad, which is available through April. First launched in 2013, Cohen said co-created limited-time offers have “done very well,” and that plans for another option featuring salmon are already in place for next spring.