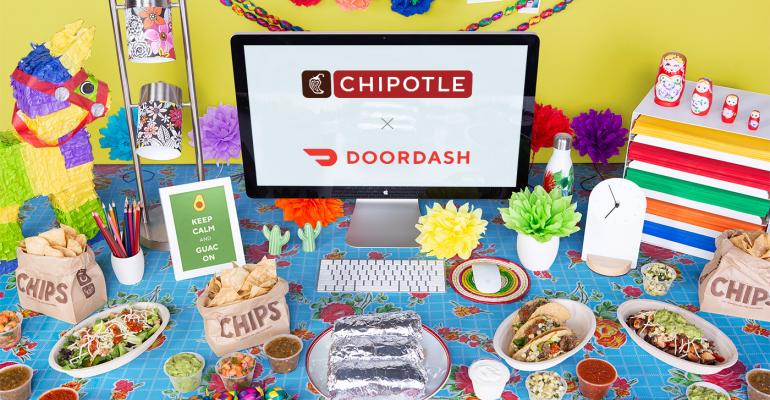 Chipotle rolls out delivery at 1,500 locations through DoorDash

Chipotle Mexican Grill Inc. has partnered with DoorDash to bring delivery to 1,500 restaurants, a move that makes good on CEO Brian Niccol’s pledge to boost the brand’s visibility.

The partnership, announced in a joint statement released on Monday by both companies, expands delivery to more than half of Chipotle’s 2,441 restaurants. The Denver-based fast-casual chain also uses Postmates, where delivery is currently available at about 660 restaurants, according to the provider’s website.

Many of those restaurants are in markets that overlap with San Francisco-based DoorDash, which is available in more than 800 cities across the U.S. and Canada. DoorDash has become one of the leading delivery providers for national chains including Chick-fil-A, Jack in the Box, The Cheesecake Factory and Wendy’s.

The DoorDash deal is one of Niccol’s first large-scale plans to reboot the brand by making it more convenient for today’s mobile-addicted diners. When the former Taco Bell CEO came to Chipotle in early March, he accelerated talks with DoorDash.

“Access is a huge deal for us,” Curt Garner, chief digital and information officer at Chipotle, told Nation’s Restaurant News.

With foot traffic stagnant throughout the industry, limited-service and casual-dining restaurants alike are turning to third-party delivery providers to boost sales. It’s one of the fastest-growing trends in foodservice and a must-have for restaurants looking to gain share, according to The NPD Group.

“Delivery has become a need-to-have and no longer a nice-to-have in the restaurant industry,” Warren Solochek, NPD’s senior vice president of industry relations, said in an April report.

Chipotle is seeing similar gains on delivery, which, prior to the DoorDash deal, was limited to markets where Postmates operates.

Garner said Chipotle is not revealing how the DoorDash deal might impact revenue. But, he acknowledged that current delivery trends within the chain suggest Chipotle stands to do well from off-premise transactions, as digital orders tend to produce higher-than-typical check orders.

“With DoorDash, we expect people will order more than one entree,” Garner said.

DoorDash said its users are hungry for Chipotle.

Christopher Payne, chief operating officer of DoorDash, said the brand is “one of our top requested businesses.”

But before rolling out delivery at a larger scale, Garner said it was important for the company to pressure-test the system to ensure its success.

For example, DoorDash’s system is directly integrated with each restaurant’s POS system. This increases speed of service because employees aren’t forced to re-enter orders coming in from a third-party delivery tablet set up at the counter.

The chain’s second make lines are also helping with order speed and accuracy.

The stations, first introduced a couple of years ago, are in nearly every restaurant, Garner said. The separate kitchen counters allow workers to assemble meals ordered for takeout, catering or delivery, increasing throughput.

These stations, currently at 237 restaurants, are outfitted with digital images that illuminate to show employees which ingredients are called for in each order.

“Order accuracy has improved in those restaurants, leading to a nearly 20-percent improvement in customer feedback,” Niccol said last week.

Outside of delivery, Niccol is expected to discuss other turnaround initiatives during a June conference call. At that time, Garner said he will likely discuss delivery revenue projections and other plans to make the brand more accessible.

Chipotle was founded by Steve Ells in 1993. Despite a series of food-safety beginning in late 2015 through 2016, the build-your-own burrito brand remains one of the industry’s most copied fast-casual concepts, as younger diners demand food customization.

To celebrate the partnership, delivery fees, typically around $4.99, will be waived on Chipotle orders of $10 or more made through the DoorDash app starting on Monday. The deal runs through May 6 and includes free delivery on one of the busiest days for Mexican food orders, Cinco de Mayo, with the promo code “GETCHIPOTLE.”