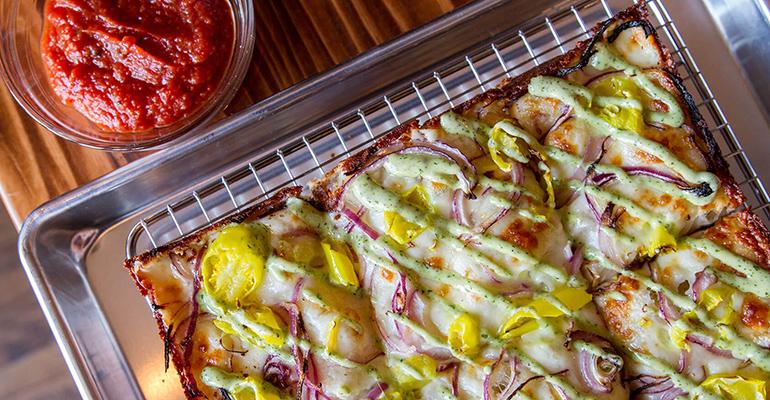 Eight-unit Emmy Squared Pizza — which is expanding from its base in Brooklyn, NY — touts their use of organic flour and unexpected touches like house-made vodka sauce and Alabama white sauce.
Consumer Trends

Detroit-style pizza — with its distinctive rectangular shape, caramelized crust and stripes of sauce — isn’t only in the Motor City anymore

Legend has it that Detroit-style pizza — with its distinctive rectangular shape — was born at Buddy’s Pizza in the Motor City in the mid-1940s. Its cachet derives not only from its use of a steel pan that was supposed originally sourced from an auto-parts dealer, but also from its four crunchy corners caramelized with cheddar or Wisconsin brick cheese. In a year when pizza has reasserted itself as consumers’ comfort food of choice, its rising popularity allows operators to differentiate themselves in a crowded category.

Chain and Independent. Pizza Hut kicked off 2021 with a limited-time offer of four Detroit-style pies: the result of a year of testing more than 500 iterations. The Detroit Double Pepperoni option boasted 80 pepperoni slices and a special vine-ripened tomato sauce unique to the product line.

Unlike Pizza Hut’s promotion, Little Caesar’s four-cornered Deep!Deep! Dish Pizza is a menu standard with nods to the chain’s roots in Detroit. The operation steps up its game with an occasional eight-corner limited time offering consisting of two Deep!Deeps! side-by-side to address customer demand for the desirable crispy corners. 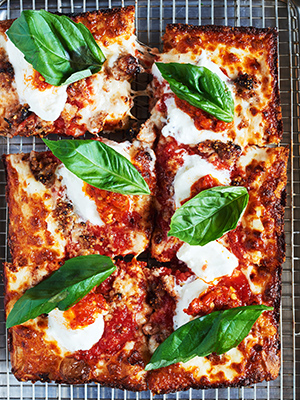 Independent pizzamakers and emerging chains distinguish themselves with unique ingredients used in their Detroit-style pies. Eight-unit Emmy Squared Pizza — which is expanding from its base in Brooklyn, NY — touts their use of organic flour and unexpected touches like house-made vodka sauce and Alabama white sauce. Chicago’s B Square, meanwhile, uses homemade fennel sausage and truffle oil as toppers, while Via 313’s five locations in Austin boast homemade ricotta and natural-casing pepperoni. Meat-averse patrons here can substitute dairy-free cheese on any of the pies.

Coast to Coast Pizzerias touting their Detroit cred are cropping up all over, notably in regional pizza strongholds like New York and Chicago. Lions & Tigers & Squares in New York City nods to its eponymous sports teams with hearty offerings like mustard pizza with a caramelized cheddar crust, corned beef, sauerkraut and spicy brown mustard. In Chicago, which lays claim to its own pizza sovereignty, chef Bill Kim’s Pizza and Parm Shop pays homage to the well-regarded chef-owner’s heritage with Korean BBQ Ground Beef and Kimchi Pizza. Though located in Salt Lake City, Bricks City Detroit Style Pizza provides a real Windy-City mashup. The Italian Beef Dip Pizza puts the favorite Chicago sandwich filler on a pizza crust served with the requisite giardiniera relish and a side of Italian-accented jus for dipping.

Menu descriptions at Atlanta’s MTH Pizza romance the dough, the baking process and the 16 ounces of melty cheese, and in a savvy marketing move, the operation drives demand through planned scarcity: Only 15 Detroit-style pies are made per day and sold on a first come, first-serve basis via the ordering portal, which opens at midnight for the following day.

Recently opened in Washington D.C., Tonari creates Detroit-style pizzas with a Japanese accent. Examples include Mentaiko and Corn Pizza that marries mentaiko, or pollock roe, cream with Kewpie corn puree and scallions under a blanket of brick cheese. The crust is made from imported Hokkaido wheat flour, and the pans receive a coating of rice oil that boosts the crunch factor.

On the opposite coast, Square Pie Guys in San Francisco lives up to its name with an inventive menu that goes way outside the pizza box. The Spring Chicken is made with spring onion and pea puree, artichoke, roasted chicken and charred snap peas, while the JLin is topped with lemon-garlic ricotta cream and green goddess Caesar dressing.

Plays Well with Others. Some restaurants bake up more than one style of pizza. That’s true for MTH, where the eight 16” round, house special pies coexist with the pair of 8 by 10” Detroiters. Via 313 also offers bar-style, thin-crust pies redolent of taverns and beer joints everywhere in addition to the Detroit options.

But the prize for mix-and-match variety goes to lauded pizzamaker Tony Gemignani in San Francisco. Tony’s Pizza Napoletana gives diners a dizzying array of options, each of which is grouped by baking method, time, and toppings. There are classic Italian, American and Neapolitan options cheek by jowl with Roman, Sicilian, Grandma and St. Louis versions. The five Detroit-style pizzas are cooked in gas ovens at 550 degrees, require an extra 25 minutes to bake and come topped with both brick and cheddar cheeses. The prized corners? They are garlic-butter toasted to enhance their satisfying munch-ability.