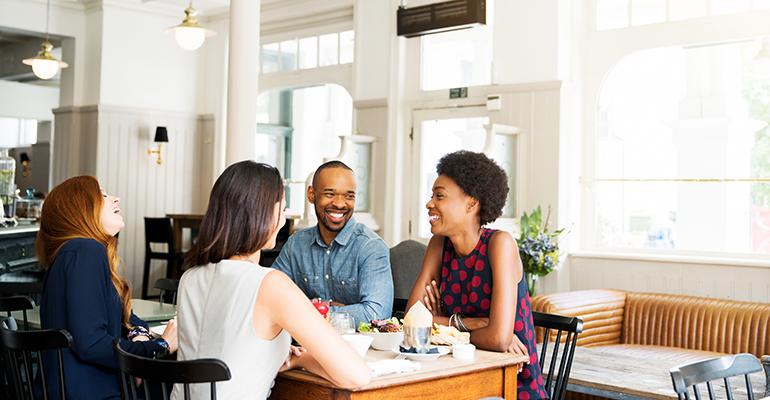 Diners are mostly positive in rating their eating-out experiences

Sales may be consistently better than they were before the pandemic, but restaurant traffic has yet to recover. Same-store traffic was down -5.1% compared with May of 2019. Not only are guest counts declining in restaurants, but traffic performance worsened during the most recent month. April’s two-year same-store traffic growth was relatively stronger but still down 4.0%.

The optimism in the industry is shared by restaurants guests. A larger percentage of restaurant experiences in May were rated more positively than two years ago. Out of the online reviews and comments centered primarily on a restaurant’s “food,” the percentage that was classified as positive improved by 8.0 percentage points compared with May of 2019.

The percentage of reviews and comments classified as positive for restaurant “service” also improved over the last two years. Positive “service” mentions improved by 6.4 percentage points during the period. However, when studying all mentions of “service” (not just those comments that were primarily focused on this aspect of the restaurant experience), the data shows “service” sentiment softened quarter-over-quarter as more guests returned to dining at restaurants and staffing difficulties proved to be a major challenge for the industry.

There is no doubt pizza is one of the most popular menu items among guests of limited-service restaurants. Among “food” mentions associated with limited-service restaurants in May, pizza was the most often mentioned item with a positive sentiment. Yet while many guests raved about their pizza during the month, there were many others who were disappointed. Expectations can be high when ordering a well-loved, familiar favorite such as this. Pizza was also the menu item with the most negative mentions during the month. But overall, net sentiment — a value representing the percentage of positive mentions minus the percentage of negative mentions — for pizza was positive in May.

Burgers and chicken also topped the list of menu items with the most positive mentions associated with limited-service restaurants, both staples commonly associated with counter-service brands, particularly those in quick service.

Like pizza, chicken can be polarizing in limited-service. Despite all its positive mentions, it was also the second-most mentioned food item with a negative sentiment in online reviews and comments.

Unsurprisingly, fries are an item that guest complain about the most in limited-service. Particularly in an environment in which most meals are eaten outside the restaurant, fries can be a tricky item to execute and package in a way that will remain hot, crispy and fresh by the time they are consumed. It is common to find many mentions of “soggy” associated with fries.

For full-service restaurants, steak is both the most mentioned menu item with a positive and a negative sentiment. Especially with the latest resurgence of dine-in and the upswing of full-service sales, steak is once again at the forefront of the restaurant experience. And while net sentiment was positive for steak, there are plenty of instances in which its execution fell short of the guest’s expectations.

It is also interesting to find salads as the second-most mentioned food item with a positive sentiment for full-service restaurants. As the industry comes out of the pandemic period, there are plenty of guests looking for healthier meals. Previous trends, such as plant-based meals, are likely to continue to drive menu innovation once again.

As what was seen among limited-service restaurant guests, burgers are among the most positively reviewed menu items in full-service. Chicken and fries are more challenging from an execution standpoint, particularly in this unfamiliar environment in which about 30% of full-service restaurant sales are through off-premises channels.

Another positive sign for the restaurant recovery is a return to normalcy from a market perspective.

Markets that consistently had the most positive restaurant sentiment from their guests before the pandemic are once again at the top of the list. A clear example of this is Orlando, Fla., which has returned as the major market with the highest net sentiment based on restaurant “food,” “service,” “value” and “intent to return.”

“Ambiance” is an attribute of the restaurant experience that continues to be extremely important given its links to cleanliness. During May, Raleigh, N.C., was the DMA with the most positive “ambiance” net sentiment, followed by Orlando and Washington, D.C. The latter is interesting, given that it was in late May that restaurants were allowed to return to full capacity, after suffering from strict restrictions for more than a year.

Most major markets in the country posted positive two-year same-store sales growth during May. But there is an interesting dynamic behind three of the markets that are still experiencing declining sales.

New York City may still be seeing negative sales growth compared with 2019, but it was the market with the second-highest “intent to return” sentiment during May. Guests there were mostly satisfied with their restaurant experiences during the month, a good omen for the near future. On the contrary, Seattle and San Francisco are both trying to climb their way out of negative sales growth but are among the four major markets with the lowest “intent to return” sentiment in May.

The Restaurant Guest Satisfaction Snapshot (RGSS) is produced by data from Black Box Guest Intelligence. Guest Intelligence is tracking over 190 brands to benchmark customer satisfaction and is the only online tool that integrates with operational performance data to validate the impact on financial performance. The data set focuses on six key attributes of the restaurant industry experience: food, service, ambiance, beverage, value and intent to return.