Your purchase will show up among the Pokeman Go “Items.”

That will take you to a “Settings” screen with options such as Items, Pokemon and “Shop.” Tap “Shop.”

A screen noting an “Empty Module slot” will open. Tap the white bar to install the module.

As smartphone apps go, the augmented-reality “Pokemon Go” really is a monster.

“Pokemon Go” has been downloaded to more than 15 million smartphones in less than a week, according to the analytics consultancy SensorTower, and restaurant operators are asking how they can capture them as customers as well as Pokemon hunters catch the little Pocket Monsters.

Here’s a seven-step tutorial on buying and using the “Lure Modules” that the developer Niantic is selling and experts recommend to draw customers’ attention.

A restaurant operator can buy 30 minutes of heightened Pokemon action by buying Lure Modules and installing them at PokeStop locations.

The Lure Modules will only work at PokeStop locations, which frequently are near restaurants. In my neighborhood, Einstein Bros. has one in a strip shopping center and Starbucks and Zoe’s Kitchen just a half block away have one in front as well.

First step: Make sure your location and your smart phone are near a PokeStop, which is designated by an elevated blue cube on the app that turns into concentric three-dimensional spinning circles as you near it.

During the period when you want to increase possible “Pokeman Go” traffic for 30 minutes, tap on the spinning “PokeStop” and click on the white bar immediately beneath its location.

If your restaurant is within yards of a PokeStop, buy Lure Modules by first tapping the red and white ball at the bottom on the “Pokemon Go” app.

Let potential customers know you’ve made in investment by posting your alluring purchase to your Facebook, Twitter and Snapchat fans, such as Just Salad did in New York as seen in the tweet pictured above.

Your location is a “Lure” spot when you see what looks like a mini blizzard of pink colored leaves. The Pocket Monsters will show up for you and others for 30 minutes. 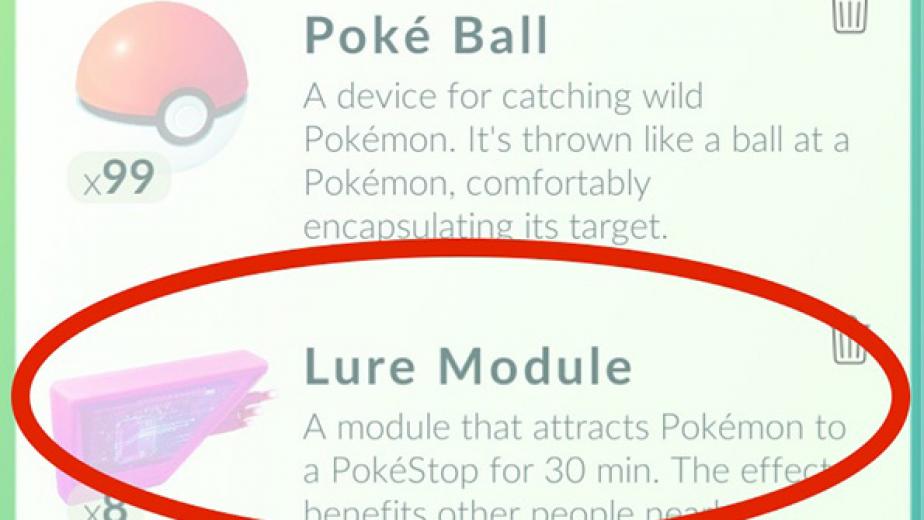 Next Up
Flavor of the Week: Microgreens add a healthy touch
Start Slideshow ›