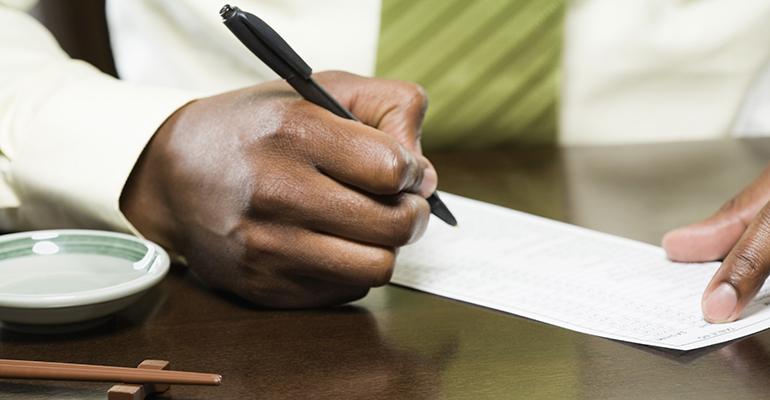 The check growth rate was calculated on a two-year basis, Fernandez said, so “it’s capturing the huge increases in check last year due to the pandemic (larger orders, family bundles, etc.) and the effect of prices rising rapidly this year.”

For August alone, the Bureau of Labor Statistics, which calculates the index, said the food-away-from-home index rose 0.4% in the month after increasing 0.8% in July. The index for limited-service meals rose 0.8% in August, and the index for full-service meals increased 0.6%.

Ruth’s Hospitality Group Inc. made “surgical” increases in menu prices, including a 2.5% hike in May, to offset pressures in commodities as it continues to move toward full capacity in its steakhouse restaurants, executives at the Winter Park, Fla.-based fine-dining steakhouse brand said in August.

The Winter Park, Fla.-based fine-dining steakhouse brand with 140 units, in a second-quarter analysts call, said its same-store sales were up 5% despite pandemic capacity restrictions during much of the period.

However, Chuy’s Holdings Inc. is holding off on any price increases until 2022. Steven Hislop, CEO and president of the Austin, Texas-based 95-unit casual-dining Mexican brand, said,

“We usually take a price increase once a year. It's usually at the end of the first period of 2022, which would be in February, and we'll look at that.”

In other data released Tuesday by Black Box, the company said dine-in sales continue to be negative for full and limited service, but declines were larger for limited-service restaurants.

“All dayparts have seen an improvement in sales growth compared to August,” the firm said. “The top performing daypart continues to be mid-afternoon, followed by dinner and lunch. Although still underperforming the rest, late-night is on path to achieving its first month of sales growth since January of 2020.”

Black Box found hourly wage growth has been increasing steadily since the beginning of the year. “Wage growth for crew members in limited-service remained flat compared to June, but at a historically high level that shows the push for using higher wages as a resource to attract talent,” Black Box noted.

“While May and June didn’t see any major movement in staffing levels, restaurants started experiencing some improvement in July based on the average number of employees per location,” the company said.

Understaffing was being noted among the guest online mentions in Black Box Guest Intelligence, the company said.