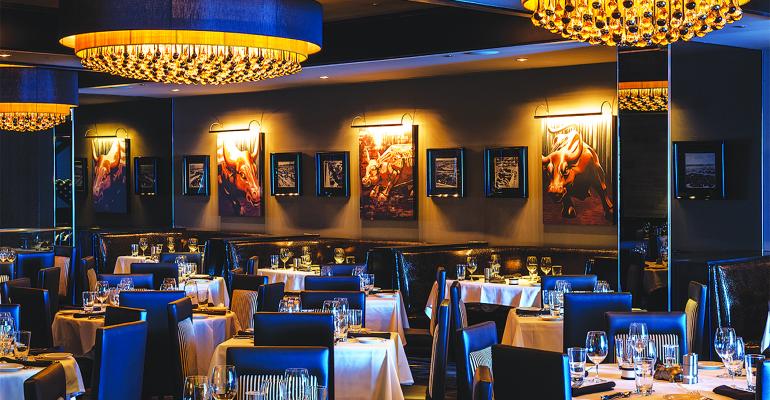 “We’ve done a lot of things differently than the old Morton’s,” said Tim Whitlock, Morton’s chief operating officer. Whitlock worked at Morton’s more than 20 years ago before leaving the chain. He eventually came to work for Landry’s, and when company chairman and CEO Tilman Fertitta bought Morton’s, he made Whitlock its COO.

Since then, Whitlock and his team have worked to upgrade Morton’s training procedures, revamp the menu and take the decor in a different direction.

All five of the white tablecloth chains in the survey — Morton’s, Ruth’s Chris Steak House, The Capital Grill, Fleming’s Prime Steakhouse & Wine Bar and McCormick & Schmick’s round out the quintet — scored in a pretty tight range, with the difference in most of the scores being statistically insignificant. Ruth’s Chris, for one, had high scores for Food Quality, Cleanliness, Reputation and Likelihood to Recommend.

However Morton’s was markedly higher in terms of Value, Atmosphere and Craveability — all factors that the chain’s management has been working to improve since Houston-based Landry’s took it over in 2012.

When it comes to decor, Morton’s locations traditionally have been big, masculine steakhouses with shuttered windows and Rat Pack era music of the 1950s and ’60s. Whitlock’s team changed the carpet, chairs and upholstery, making it all slightly darker, but they also opened the windows to let in natural light, sometimes to dramatic effect.

“We have a restaurant in San Juan, Puerto Rico. We took the shutters off the windows and now we have an oceanfront restaurant,” Whitlock said.

The team also introduced a musical format more suitable to the 21st century.

The systemwide remodeling of the chain’s 73 restaurants is about 90 percent complete, Whitlock said.

When it comes to service, Morton’s has “a great team of people — great regional managers, great servers and managers who love the hospitality business,” Whitlock said. “We’ve really focused on hospitality over the past four years: Great service, great upscale food, paying attention to the flavors and the plate presentation. We’ve made a commitment to retrain our teams — not only managers, but also our service staff, with our training department going to restaurants and retraining.”

That has included switching out training materials from a “kind of a self-guiding tool that was a bit dated in my opinion,” to a more traditional, but up-to-date training manual. “And hopefully soon we’re going to update that with video training as well.”

When it comes to food, Morton’s has started to do something it had rarely done in the past: Change it.

“The menu was pretty much the same for the last 30 years,” Whitlock said.

Then four years ago the company introduced 15 new menu items, including surf and turf platters that paired filet with shrimp, scallops or a crab cake.

“They pretty much went to the top of the list of sales of items that were sold,” Whitlock said.

As a result, he said, more customers are ordering items with lower-food costs, such as salads, side dishes and desserts, making the meals more profitable.

“If you get a dessert or salad, I’m a very happy person,” Whitlock said.

Morton’s also introduced short ribs and a mixed grill, along with new plateware that veered from the traditional round and oval steak plates into new rectangular and oblong dishes.

Appealing to a younger consumer

Morton’s also introduced bar specials for its early evening Power Hour, including a trio of 2-ounce filet medallions, each with its own sauce — peppercorn, Béarnaise and blue-cheese butter — for a total of $8.

“That has been a big seller for us. People seem to really enjoy that,” Whitlock said.

Customers also like the Prime mini cheeseburgers that start at $7. Last month the chain introduced a Million Dollar Burger, a cheeseburger topped with foie gras and truffle butter for $18.

Recent seasonal specials, which change every six months, include the Bacon Steak, composed of two thick, broiled 6-ounce slabs of Nueske’s bacon served with a bourbon glaze, “so it’s crunchy on the outside and moist on the inside,” Whitlock said.

Seasonal salads are on the menu, too, now, along with specials such as bone-in filets and New York strips and mashed cauliflower with Parmesan cheese.

On April 1 the chain was slated to introduce an 8-ounce Snake River Farms Wagyu strip, too.

The team led by Tylor Field III, Morton’s vice president of wine and spirits, has also upgraded beverage options, with seasonal cocktails changing every six months, and premium wines by the glass, rotated out twice a year.

“The consumer is always looking for something new and fresh and different,” Whitlock said.

To that end, Field has worked with Raymond Vineyards in St. Helena, Calif., to make a proprietary wine blend.

“It has been very, very successful for us,” Whitlock said.

Field also has brought in Coravin, a wine-dispensing device that replaces the wine in a bottle with inert argon gas, allowing restaurants to offer more premium wines by the glass without waste.

So now the restaurant, which has long offered about 40 wines by the glass, now also offers four high-end wines between $25 and $30 per glass.

Whitlock said customers have responded well to the chance to try just one glass of pricey wine rather than committing to a whole bottle.

“They love it,” he said. “And they like to come back and have another glass of that wine,” resulting in more repeat business.

Field also upgraded the chain’s craft beer program. Morton’s has developed a national program and enabled local managers to source beers that are popular in their markets.

“It makes the restaurant feel a bit more local — part of the community,” Whitlock said, adding that each unit also gets involved with local charity events.

The upshot of all of those changes, apart from higher Consumer Picks scores, has been a somewhat younger customer base that has joined the “traditional VIPs” that have been Morton’s core audience. The price point is down a little, but so are food costs.

Morton’s has been opening new restaurants, too, including one in downtown Manhattan three years ago and in Taipei, Taiwan, in 2015.

In the coming year, Morton’s plans to open two new restaurants, both in upstate New York — one in Saratoga and the other in Niagara Falls.

“We’re going to be their steakhouse of choice,” Whitlock said.

Correction: April 7, 2016 This story has been updated to include more recent interior and menu photos of Morton's the Steakhouse.