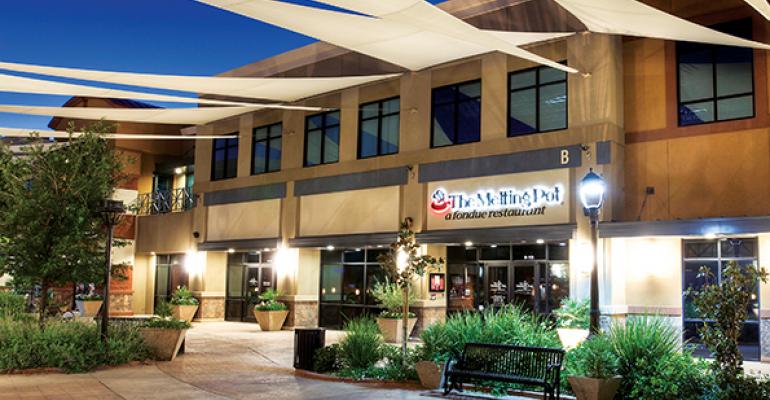 “The brand affinity we have with our loyalists is remarkable,” said Mike Lester, president of The Melting Pot, the 135-unit chain that jumped from sixth place to first place in the annual Consumer Picks survey.

The fondue restaurant, a subsidiary of Front Burner Brands Inc., earned top marks in the categories of Cleanliness, Service, Atmosphere and Craveability. It also was in a statistical dead heat with Bonefish Grill in the categories of Food Quality and Likely to Recommend.

Lester said he believes Tampa, Fla.-based chain’s top scores with consumers are the result of revolutionary changes in operations and the menu that the chain’s management began implementing in 2011 and 2012.

Still reeling from the recession that started in 2008 and the shifts in consumer attitudes that came along with it, The Melting Pot, which already was surveying 100,000 of its customers each year, commissioned studies of its lapsed customers and of people who had never tried it to determine how to get them to visit.

“That information was very interesting and very actionable,” Lester said.

The Melting Pot caters to a well-educated, middle class group of young Millennial families. About 45 percent of them have children living at home, more than two-thirds of them are between 18 years old and 39 years old, and the vast majority of the people making the decision to eat at The Melting Pot are women, according to Front Burner Brands.

The typical dining experience at The Melting Pot was historically a unique one: Customers started with a cheese fondue, then they had a salad, followed by a course of meats that customers dipped in a choice of broth or hot canola oil. They finished with chocolate fondue.

That meant that a typical visit to The Melting Pot required a relatively high amount of time and money and the consumption of a lot of food. Average unit volumes are about $1.6 million annually.

Lester said even the restaurants’ loyal customers had pigeonholed them into a place for mostly birthdays and anniversaries.

Consumers found multiple portions of the same thing to be limiting. Instead, they told Melting Pot management that they wanted to order different things and taste each other’s food.

“They told us they wanted to use us more often,” he said.

In what Lester described as a “radical” menu change, The Melting Pot started testing a menu in 2012 based on its findings in which every item was portioned and priced per person, allowing for parties of two or more to try a wider variety of foods. The previous menu priced all items per couple, making everything look more expensive.

The Melting Pot also made it clearer on the new menu that guests could have as much or as little food as they wanted: At the top of one page the new menu reads: “How do you fondue?” with opportunities for customers to customize their choices.
The new menu was first tested in eight restaurants across the country, in restaurants with high and low volumes and in different geographical areas. After scoring well, the menu was rolled out in January 2013.

“Literally that week, all of our guest metrics spiked — all of them,” Lester said, including pace of service, perception of value, intent to return and recommend, and quality of food and service.

Guests also started coming more often: Frequency of visits went from 1.8 times a year before the menu change to 2.3 times per year as of 12 months ago, the last time they gauged that figure.

“We’re seeing people beginning to understand [they can visit] Melting Pot on a Monday or Tuesday night, because they’re enjoying a quicker dining experience,” he said.

The new menu did result in a slightly lower average check, currently around $40 per person, but Lester said management anticipated the change and introduced new items that kept the average check from falling too quickly.

They also added premium plates of cured meats to be added to cheese fondue courses. For dessert, they noticed that some people didn’t eat the cheesecake that was part of their chocolate fondue and instead made it part of a $4.95 premium dipper plate that also includes creampuffs and fresh berries.

The Melting Pot also has responded to demands for better, more varied cocktails, as well as seasonally changing items and even local produce.

Inspired by the hit cable television show Top Chef on Bravo TV, Top Cocktail named five drinks as competitors, complete with personalities — a gin and pineapple juice cocktail named Tiki Girl was described as “free spirited, beachy and mellow,” while The Baller, made with muddled cherry and orange, cinnamon whiskey and ginger ale, was billed as “young, bold and adventurous” — and invited guests to vote on their favorite either through the chain’s website or via text message. Voting guests were entered for a chance to win a $250 gift card.

Lester said they had just under 15,000 votes and got a slight boost in cocktail sales.

The chain, targeting its mostly female clientele, also did a whiskey-and-women night, marketed as an opportunity for a ladies’ night out. It included whiskey flights, a bourbon, bacon Cheddar fondue, a chocolate fondue with bourbon and even bourbon-infused salad dressing.

“We’ve tried to create a much more contemporary and relevant beverage and dining experience for our guests,” Lester said, noting that such promotions also underscore the fact that The Melting Pot doesn’t have to be a special-occasion restaurant.

Starting this May, they’re planning a summer seafood boil, using their fondue pots to serve lobster, crab, scallop and shrimp and pairing it with summertime beverages, such as shandies: a combination of beer and lemonade.

A year-and-a-half ago the chain also embarked on what Lester called a “localization” campaign. Being almost all franchised, “we are 135 small businesses across the United States,” Lester said. So not only did former Front Burner corporate chef Shane Schaibly start working with franchisees and regional suppliers to use local produce when available — something current chef Jason Miller has continued — but franchisees have been given more autonomy to select the special promotions that work best for them.

“We want them to feel local and be local, so we introduced programs where they could introduce local, seasonal produce,” Lester said. “I think that allows us to compete with local restaurants.”

Franchisees also can pick up to three local cheese fondue flavors, some of which are “locally significant” such as the Old Bay cheese fondue in Maryland or the bourbon cheese fondue in Kentucky, and others that simply appeal to local tastes, like the gorgonzola-pear fondue that’s used in Florida.

Creating ‘the perfect night out’

Lester extends regionalization beyond food and gives franchisees different off-the-shelf promotions that they think will work in their markets.

For example, two weeks after Valentine’s Day is usually a slow week in Tampa, so they used a promotion called Doll-Up that encourages women to get dressed up and go to The Melting Pot by offering specials for women out on the town as a group.

In other markets, they offer Fondue Fairytales on weekends that encourage kids to get dressed up and go out for a treat.

“Our loyal customers wanted us to give them reasons to use us more. I think the localization and local promotions do that,” Lester said.

But of course customer satisfaction isn’t just derived from food.

“We have a mission of providing our guests with the perfect night out — not an okay night, but a perfect one,” Lester said.

That was the chain’s mission even before management started its 2011 refresh, but they re-emphasized it and dedicated resources to it, Lester said.

“If we have the physical ability to do something for our guests, we’ll do it,” he said.

On top of that, they worked to improve perception of the length of wait times.

“We found that families used us on Fridays and Sundays, so we brought in entertainers, such as magicians. They’re almost an extension of our own team, and we’ve trained them on ‘Perfect Night Out,’ too. So they’re completely aligned with our mission.”

Kostya Kimlat, whose Restaurant Magic business has provided magicians for around 25 Melting Pot locations over the past four years, said there are two times when magicians are most helpful: when guests are waiting to be seated and when they’re waiting for food to arrive.

“We make sure they’re relaxed and having fun, and the wait time disappears,” he said.

“At The Melting Pot they strive to make the evening an experience and a show, and the magic blends in with the experience,” he said, noting that his magicians key in to a variety of personality types and perform their tricks accordingly.

Kimlat also provides similar training to servers and managers, noting that magicians and restaurant front-of-the-house staff all have to know how to read people.