Wingstop Inc. is known for its menu of bone-in and boneless wings and tenders with 11 different seasonings and sauces.

The company was founded in 1994 in Dallas, and its headquarters remain there.

The company has invested broadly in its digital platforms, planning a $10 million investment in 2021 alone, as it works toward the stated goal of digitizing all its transactions. In the first quarter of 2021, about 63.6% of orders came through digital channels, compared to 43.3% of those in the prior-year period.

Wingstop plans to take its domestic digital platform to its restaurants globally. In April 2021, Wingstop announced a deal for 100 new restaurants in Canada over the next 10 years, and those would be the first to adopt the new digital channels. The first restaurant in the Canadian agreement is expected to open in Toronto in 2022. 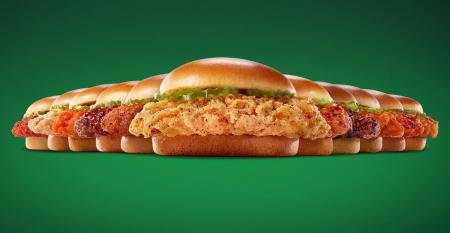 Is thigh demand leaner than anticipated at restaurants?
May 06, 2022
Smaller chains struggle to find a place for chicken thighs, despite their popularity at Wingstop and Chipotle

Wings from Wingstop and Wings Over are infused with CBD, hemp, and terpenoids, oh my
Apr 19, 2022
Check out all the 4/20-inspired goodies and deals this year on menus nationwide

Wingstop believes the worst of wing inflation is over
Feb 16, 2022
The fast-casual brand reports same-store sales increase 7.5% after record 2020