Which Wich Superior Sandwiches is a fast-casual sandwich chain for which customers mark their choice of sandwich toppings on the bag in which the sandwich is to be served. It was founded in Dallas in December 2003 by Jeff Sinelli after he sold his successful Genghis Grill. The first franchise unit opened in February of 2005 and there were 50 locations by 2008 and 100 by 2010. It opened its first international location in Dubai in 2013.

Which Wich’s main charity initiative is Project PB&J, which donates peanut butter & jelly sandwiches to people in need. One such sandwich is donated for every sandwich sold by the chain.

Which Wich was a pioneer in offering plant-based protein, having tested an early version of Beyond Meat’s plant-based chicken substitute in 2014. Beyond Meat temporarily discontinued that product but Which Wich continues to offer vegetarian options. 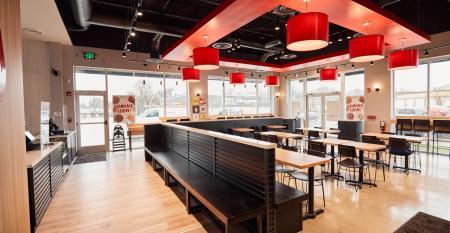 Grubhub sued for adding restaurants to its delivery platform without permission
Oct 28, 2020
Class-action suit accuses Grubhub of using “bad” delivery experience to pressure restaurants to sign up; the tactic is widely practiced in the delivery sector by rivals, including market leader DoorDash