Taco Bell is an iconic American fast food restaurant founded by Glen Bell in 1962 that specializes in its own version of inexpensive Mexican food. It operates in some 30 countries and saw U.S. sales in excess of $11 million in 2020.
Bell himself invented the crunchy taco that’s now an intrinsic part of Mexican-American cuisine. He developed the prefabricated shells to be quickly stuffed with seasoned beef and cheese. The menu has expanded to include burritos, quesadillas, nachos, chalupas and proprietary items such as the Crunchwrap, and hybrids such as the quesarito.
Bell sold Taco Bell to Pepsico in 1978. In 1997 the beverage giant spun it off, along with sister chains Pizza Hut and KFC, into Tricon, which was rebranded as Yum! Brands in 2002.
Taco Bell has remained affiliated with Pepsico, selling Pepsi-owned beverages including proprietary blends developed with Mountain Dew. In 2012 it teamed up with Pepsico subsidiary Frito-Lay to develop Doritos Locos Tacos, one of the most successful rollouts in restaurant history.
Innovation has continued with the nationwide launch of breakfast in 2014 and Nacho Fries in 2016.
Although known as a good source for hearty, inexpensive food favored by the 18-34-year-old demographic, Taco Bell is also praised by animal rights and vegetarian groups for its vegetarian repertoire thanks to its wide use of beans. 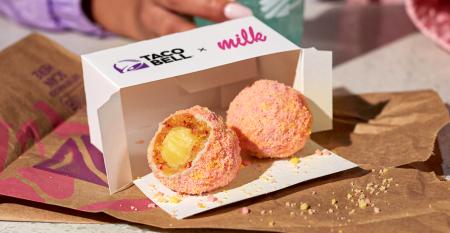 Taco Bell and Milk Bar partner up to create strawberry bell truffles
Aug 05, 2022
The new strawberry truffle is available for a limited time this month at select Milk Bars and one Taco Bell

Taco Bell is bringing back Mexican Pizza for good
Aug 01, 2022
Three months after the restaurant brought back the popular menu item as an LTO and subsequently announcing a...

Taco Bell’s long-awaited ‘redefined drive-thru’ to open Tuesday in Minnesota
Jun 06, 2022
Proving the world has come a long way from garbled squawk-box ordering of the past, the long-awaited Taco Bell unit that promises to “redefine the drive-thru” is scheduled to open in Brooklyn Park, Minnesota on Tuesday...

Taco Bell fans horrified to find shortage of Mexican Pizza
May 31, 2022
About two weeks after the menu item was brought back with help from Doja Cat, it’s now missing from units across the country. Officials blame higher-than-expected demand.

11 restaurant executives on the move in December
Jan 04, 2022
Restaurant C-suite appointments did not slow down in the final month in 2021...
Load More