Subway is an American quick-service restaurant chain based in Milford, Conn., and specializing in sub sandwiches. Subway has more than 40,000 restaurants in more than 100 countries and is 100% franchised. In 2022, some corporate functions will relocate to Miami.

Subway was founded by Dr. Peter Buck and Fred DeLuca in Bridgeport, Conn., in 1965 as Pete’s Super Submarines. In 1966, the partners formed parent company Doctor’s Associates Inc. The fast food restaurant was renamed to Subway in 1968, began franchising in 1974 and expanded overseas in 1984 with a store in Bahrain.

Subway is known for its submarine sandwiches — including warm toasted subs — but the Subway menu also includes salads, wraps and protein bowls. One of the most well-known menu items is the Italian B.M.T. — Big Meaty Tasty — with salami, pepperoni and ham. Subway has offered nutrition information for its menu items since 1997.

Customers can order online through the Subway app and website at about 11,000 restaurants.

In recent years, Subway has been known for its marketing campaign around the “$5 footlong,” which it first promoted in 2008 and brought back for a limited time in 2020. Also in 2020, Subway became the National Football League’s official sandwich sponsor, debuting TV ads with coach Bill Belichick and NFL star brothers J.J., T.J. and Derek Watt. 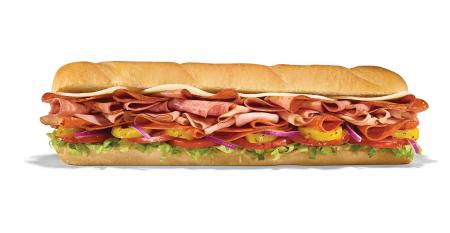 Subway moves away from its traditional service model with new curated sandwiches
Jul 05, 2022
The infinite customization that has been its hallmark is being de-emphasized to improve throughput and guest satisfaction

Sports stars rush to work with restaurants
Nov 23, 2021
See the athletes partnering with chains for marketing and brand creation