Schlotzsky’s is a fast-casual sandwich chain owned by Jamba and Auntie Anne’s parent company, Focus Brands. With 336 units, the Atlanta-based chain is the third-largest fast-casual café/bakery restaurant in America. Schlotzsky’s is known for its Original Sandwich, which is based on a Muffuletta, and is made with 13 ingredients on sourdough bread.

Schlotzsky’s was founded in 1971 in Austin as a hole-in-the-wall deli. In 1981, the chain was purchased by real estate investors, John and Jeff Wooley and Gary Bradley, who expanded the menu to include other sandwiches, pizzas, wraps, soups and salads. The company went public in 1995 and peaked at 759 locations. The Wooley brothers resigned and in 2004, Schlotzsky’s filed for bankruptcy and ceased public trading.

In 2006, Roark Capital-affiliated Focus Brands purchased the company and started rebuilding the brand from the bottom up, including a new image and updated menus.

In 2018, the company began converting units to its Millennial-focused, updated Schlotzsky’s Austin Eatery, with plans to convert the rest of the units in its portfolio. Most recently, the company began experimenting with new store prototypes, including cobranding with other Focus Brands eateries, and adding two new smaller store prototypes that will emphasize drive-thru and curbside pickup in late 2020.

Number of US locations: 336 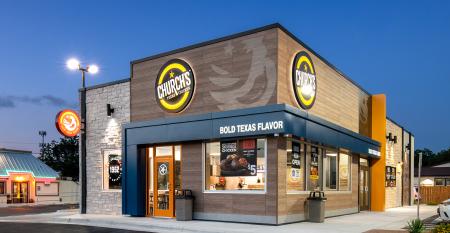 Why shrinking store sizes can pose challenges for operators, according to Schlotzsky’s
Jun 16, 2022
The Focus Brands chain rolled out an 1,800 and 1,000-square foot prototype but navigating customer friction...

How Chick-fil-A, P.F. Chang’s and McAlister’s Deli use technology to streamline operations and improve service
Sep 28, 2021
Restaurants accelerate investments in digital tools to drive labor efficiencies and keep up with high consumer expectations around convenience