A&W Restaurants is a quick-service chain focused on burgers, root beer and floats that originally began as a roadside stand in 1919 during a parade honoring returning World War I veterans in Lodi, Calif. In 1922, one of founder Roy W. Allen’s employees, Frank Wright, joined him to open a brick-and-mortar restaurant in Sacramento called A&W for the two men’s last names.

A&W Restaurants quickly became known in the U.S. for its frosted mugs for root beer and root beer floats that were kept in the freezer prior to service. In 1926, the brand began franchising, spreading throughout the U.S., two years after Allen bought Wright out of the business. Franchising initially focused on the root beer specifically but spread to brick-and-mortar units before long.

Though not rooted in fact, A&W Restaurants are often credited with inventing the bacon cheeseburger in 1963 with a new menu item at one franchised location. In 1971, A&W Beverages Inc. was created to sell the brand’s root beer to grocery stores.

Number of US Locations: 547 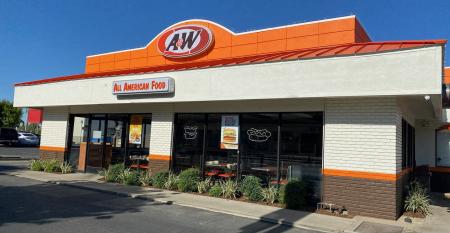 No. 4 - Southeast QSR LLC
May 10, 2010
This is part of an exclusive online series by Nation's Restaurant News and Chain Store Guide, profiling the...
Yum promotes two for China division
May 05, 2010
LOUISVILLE, Ky. Yum! Brands Inc. said it has promoted Sam Su to the posts of chairman and chief executive of its...

The downside of KFC's Double Down
Apr 25, 2010
LOUISVILLE, Ky. It’s too early to tell whether KFC’s roll of the dice with a meat-as-bread sandwich like the Double Down pays off in sales, but early findings from one marketing research firm suggest that advertising for the product may be...
2009 Year in Review: Anniversaries
Dec 21, 2009
100 YEARSFrank Grisanti Restaurants, Memphis, Tenn.Schuler’s Restaurant & Pub, Marshall, Mich.90 YEARSA&W, Louisville, Ky.Lamb’s Grill Café, Salt Lake CityRegas Restaurant, Knoxville, Tenn.80 YEARS5 Point Café, Seattle75 YEARSCarvel...
Yum says 4Q comps will fall
Dec 04, 2009
LOUISVILLE Ky. Yum! Brands Inc., operator and franchisor of KFC, Pizza Hut, Taco Bell, Long John Silver’s and A&W, said same-store sales for its final quarter this year will be negative across the board, especially with continued weakness in the...

After strong 3rd-Q profit, Yum expects 4th-Q sales to stay soft
Oct 19, 2009
LOUISVILLE KY. Yum! Brands Inc., based here, fresh from reporting an 18-percent, year-to-year jump in third-quarter profit on the strength of its overseas operations, said the fourth quarter will be particularly hard for its U.S. business as sales...

KFC confirms test of meaty Double Down
Aug 24, 2009
LOUISVILLE Ky. Sister chain Taco Bell may use the tag line “Think outside the bun,” but KFC actually is putting that philosophy...

Quotable MUFSO speakers give five decades of timeless advice
Aug 17, 2009
During the last five decades, MUFSO attendees have had the opportunity to listen to hundreds of the country’s best and...

Yum lays out plans for Taco Bell
Aug 12, 2009
IRVINE Calif. Taco Bell is aiming to steal market share in the quick-service segment through the introduction of more beverages...

Chain giveaways pave path to guest goodwill
Aug 03, 2009
Brad Laughner of Buffalo Wild Wings knew the brand had hit on something good when he recently saw a woman camped out in front of a soon-to-open store near Kansas City, Mo., in the middle of the night. She was waiting with about...
Taco Bell ousts McD as NBA sponsor
Jul 03, 2009
IRVINE Calif. Taco Bell has signed a four-year advertising deal to become the official quick-service restaurant of the National Basketball Association, replacing longtime sponsor McDonald’s Corp.Taco Bell, based here, and the NBA announced the...