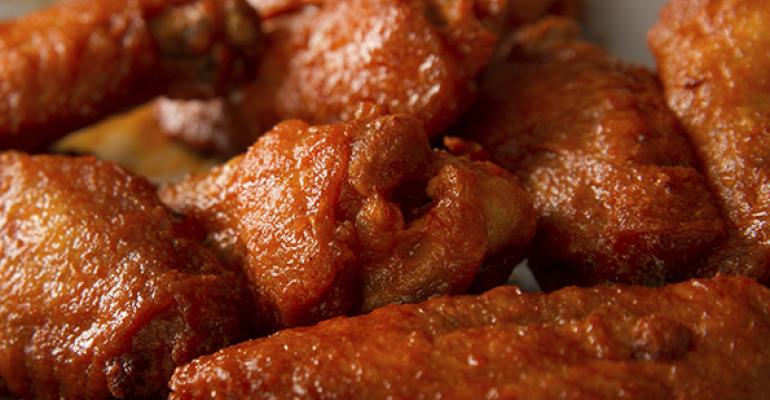 Why chicken wing prices are rising when they should be dropping

Followers of commodity prices can get whiplash keeping pace with chicken wing prices every year, and 2015 isn’t any different.

Wing prices have risen 63 percent in this year compared to the same time in 2014, according to Denver-based food purchasing cooperative SpenDifference. The high prices are coming at a time when chicken prices should be easing thanks to increases in supply and decreases in the price of corn.

“It seems weird,” said Dan Patterson, supply chain manager for SpenDifference. “All the market indicators are favorable. We have more chickens. More meat. Cheaper corn and cheaper soy. We should have cheaper wings.”

But, he noted, wings are different from the rest of the chicken.

Prices for chicken wings have generally increased over the years as they became more popular in restaurants and bars and as restaurant chains such as Buffalo Wild Wings and Wingstop grew. But in recent years, wings have been among the most volatile of all commodity costs.

Supply and demand issues can lead to wild swings in chicken wing prices from one year to the next. Wing prices were high in 2013 and fell sharply in 2014 as production increased. This year they are high again.

Wing prices also change drastically within the year due to demand. Prices are typically lowest in late spring or early summer and start rising every fall as football games help spur demand for beer and wings. Prices usually peak at the Super Bowl and remain elevated through March Madness.

That means wing prices should fall seasonally next month when the basketball games end, but Patterson believes that prices will remain high on a year-over-year basis. The reason, he said, is demand for the size of chicken wings restaurants prefer.

Generally, restaurants prefer smaller or mid-sized chicken wings as opposed to larger ones, and so do larger grocery chains and Costco. So demand for those wings remains high.

“From a restaurant perspective, the industry and customers out there have learned to go with the smallest wing possible. From an operator’s perspective, it makes sense. The more wing sections per pound, the better your food cost is, and you get more attractive price points,” Patterson notes. “Unfortunately, the big players in the wing business, including retail and grocery stores, have gobbled the supply up.”

And the supply of the mid-sized birds is shrinking because farmers are increasingly raising larger birds, which has allowed them to become more efficient and profitable because they can get more breast meat per bird.

But while farmers can raise bigger chickens to yield more breast or thigh meat, the number of wings is always limited to the number of birds. “The scientists haven’t invented the four-wing chicken yet,” said Tom Super, spokesman for the National Chicken Council.

The result is that a pound of chicken wings this year cost $1.91 per pound, compared with $1.17 per pound last year.

Super said that supply of chickens rose 2 percent this year and is expected to rise 4 percent for the full year, but it’s likely not enough to have a major impact on chicken wing supply.

Patterson recommends that restaurants start buying larger wings, which are cheaper per pound.

Indeed, some restaurant chains have started taking steps to reduce their exposure to price volatility.

Buffalo Wild Wings — which paid $1.90 per pound for wings in the first two months of this year, compared to $1.36 last year — agreed to a modified pricing arrangement for two-thirds of its wing supply. The deal narrows the cost of the wing prices it will pay. The chain won’t benefit as much from super-low prices, but won’t pay the extremely high prices, either.

The Minneapolis-based chain earlier had shifted prices to a portion-size model, rather than selling on a per-wing basis, which had been popular in the industry for years. Selling portion sizes enables the chain to sell bigger wings if it needs to.

“You’re going to see others follow that trend,” Patterson said. “You don’t have to worry so much about a specific size coming in. But if large, jumbo wings are the only things available, that’s better than a sharp stick in the eye.”