/sites/all/themes/penton_subtheme_nrn/images/logos/footer.png
Daily quotes
BROUGHT TO YOU BY
Daily quotes
Subcategories
Recent
Recent
How restaurants should prepare for the on-demand digital economy’s peak
Dec 05, 2022
The Wealthy Franchisee: 3 ways to truly be in “the people business”
Dec 05, 2022
IHOP jumps into the grocery aisle with a new pancake cereal
Dec 05, 2022
Pour Over Coffee, the slowed down brewing method
Dec 05, 2022
The newest chef-driven competitor in the plant-based war
Dec 05, 2022
Featured
How 21 restaurant companies performed in their most recent quarters
Nov 22, 2022
How eco-friendly Seattle restaurant chain Just Poke is doubling in size in 2022
Nov 17, 2022
In the Mix this week: White Castle’s culture, a CREATE recap, Denver’s restaurant scene and more
Oct 27, 2022
How this emerging brand is planning on nearly quadrupling in size in just one year
Oct 21, 2022 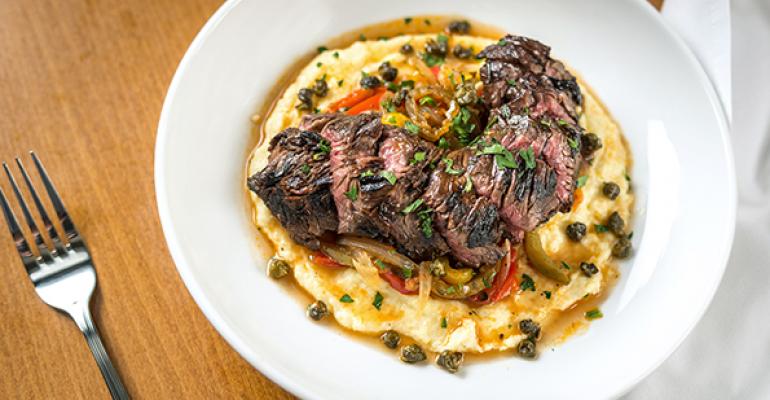 Consumer demand for beef is not going away

Beef is expensive and expected to remain so for the next year, but Americans still love it. They’re eating more hamburgers than ever and buying more premium steak. At the same time, restaurants and purchasing cooperatives are using an array of strategies to mitigate costs and get the most out of their beef.

The Centennial, Colo.-based National Cattlemen’s Beef Association reported in January that overall foodservice sales of beef in the U.S. in terms of volume fell slightly in 2014, to 7.9 billion pounds, compared with 8.7 billion pounds in 2013.

Hamburger sales remained robust: Americans ordered 3 percent more hamburgers in restaurants in 2014 than in 2013, according to The NPD Group.

Kevin Good, senior analyst at CattleFax, said ranchers are working to rebuild herds that were reduced in the aftermath of multiple years of drought that drove up feed prices. Although more cattle should mean lower beef prices, it takes up to three years from gestation for cattle to reach market weight. That means prices of many cuts aren’t likely to fall significantly until 2016 or 2017.

“You can potentially expect a little bit of relief in the second half [of 2015], but it won’t be much,” Good said.

Retail operations might see customers trading to less expensive proteins, such as pork or chicken, or from premium cuts of beef to less expensive ones, which Good said might help lower premium steak prices a little bit. However, he said he expected demand of high-end cuts in foodservice to remain robust. “That’s tied more to the stock market and corporate expense accounts,” he said.

At the high end, steakhouses are committing to even higher-end cuts of beef, as well as local steaks.

Zappoli and other steakhouse chefs are also sourcing local steak. Houston steakhouse 60 Degrees Mastercrafted focuses on steaks from a Texas herd of Akaushi cattle, while Zappoli is sourcing naturally raised 30-day, dry-aged rib eye from a supplier that procures it mostly from New York, New Jersey and Pennsylvania.

“It’s part of what they call a local harvest program,” Zappoli said.

Outside of premium, expense-account-driven venues, less expensive cuts are experiencing robust growth. The National Cattlemen’s Beef Association, citing its 2015 Technomic Usage and Volumetric Assessment of Beef in Foodservice, reports that America’s beef roast, also called the chuck eye roast — a less expensive substitute for prime rib — is the fastest growing cut, rising by 6 million pounds in 2014 compared with 2013. That was followed by Delmonico steak, or chuck eye steak, a less expensive substitute for a rib eye, whose sales rose by 5 million pounds in 2014. Although premium porterhouse is the third fastest-growing cut, rising by around 4 million pounds, it is followed by two other less premium cuts — flank or skirt steak and the ranch cut, which is a lean cut from the shoulder clod.

The popularity of such cuts might not just be due to rising prices, but to demographic shifts, said Andy D’Amico, partner and founding chef of the four-unit 5 Napkin Burger chain, based in New York City, and of 5 Napkin Grill in Miami. The latter has an expanded entrée section, including more steaks, and the skirt steak is a big seller.

“In Miami, where there’s more of a Cuban clientele, they really love skirt steak, and we sell a lot of it. “

By contrast, “New York understands hanger steak,” another flavorful, less expensive cut, and D’Amico just added it to the 5 Napkin Burger locations in New York, in a pepper sauce.

“I think a lot of them are going into different parts of the sirloin,” he said, noting that the subprimal sirloin cut is a large piece of meat that can weigh a couple hundred pounds.

“You can call different things ‘sirloin’ on the menu that aren’t traditional sirloin,” he said, such as the tri-tip, a cut at the very bottom of the subprimal that’s popular in the western U.S. and growing in popularity elsewhere, Woolley said, “especially in the last year and change, it’s as mainstream as possible.

“Americans’ hankering for beef, the drive for it, is not going away,” he added, so restaurants are figuring out how to provide it and still turn a profit.

DeWayne Dove, vice president of risk management for the purchasing cooperative SpenDifference, said he sees both restaurants and retailers trading down to less expensive cuts, which is driving up prices of those less premium parts of the cattle.

“We have seen retailers moving from rib eyes or strips to top sirloin," he said, which means top sirloin is now trading at record levels. He indicated top sirloin rose by 15 percent this year compared with record highs of 2014.

“Instead of an 8-ounce sirloin, run a 6-ounce sirloin combined with a shrimp or lobster deal. … Those strategies are going to have to be in place not just this year, but pretty much through all of 2016,” he said.

Dove is figuring out ways to bring prices down at every part of the purchasing process.

“We’ll line up every component [raw materials, yield, labor, overhead, packaging and freight]. We’ll put five, six, seven suppliers side by side and figure out why one’s higher than the other,” he said.

“It’s important to understand how to dive into those opportunities, because the raw material market is working against you,” he said. “You’ve got to pull every penny out of every part of it that you can.”

Although some independent restaurants buy entire carcasses and process them in-house in an attempt to cut costs, Dove says that the journeymen meat cutters at a supplier are likely to be more skilled and get higher yields than cooks in a restaurant. However, he said, restaurants might consider purchasing whole primals and subprimals and having the supplier cut them for them.

“We work a lot on utilizing the entire subprimal,” he said, using the best parts for steak and the trim for kebabs or hamburgers.

He said suppliers are open to those solutions.

“To clean up that whole carcass and find other homes for it is very labor-intensive, so it’s definitely a door that’s always wide open” as far as suppliers are concerned, Dove said.

He also suggested buying flash-frozen meat when prices are at their lowest and having your supplier thaw them in advance of the high-cost season at the end of the year.

He pointed out that the faster meat is thawed, the more volume is lost, but good meat suppliers will have the meat undergo a thawing process that lasts between three weeks and four weeks.

Correction: March 9, 2015  An earlier version of this story misstated the number of 5 Napkin Burger locations. There are four.