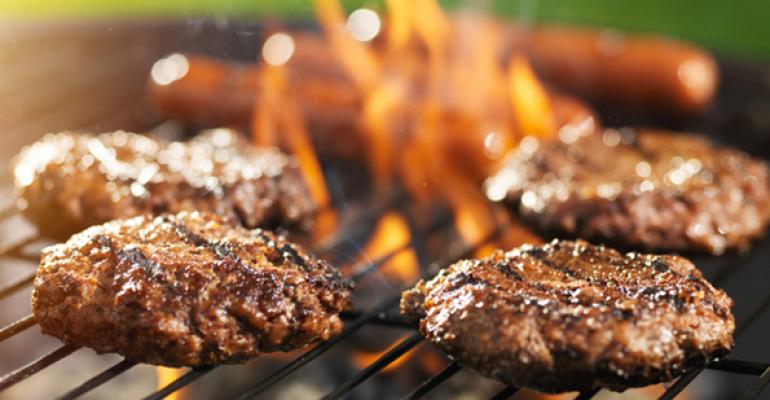 The price of lean ground beef has increased about 26 percent over the past two years, and could rise as much as another 10 percent in 2015. Restaurants may have just one choice as they look to combat that inflation.

“As I heard at MUFSO from one of the CEOs of a small burger chain saying, ‘When am I going to be able to promote burgers again?’” Barone said.

The answer? Probably not until 2017. Barone called what has happened with ground beef prices in particular a “perfect storm” of rising global demand, consumer skittishness and unfavorable weather.

“It’s a challenging environment with commodity costs,” said Joe Koss, CFO of Prairie du Sac, Wis.-based burger chain Culver’s. “And it’s not just this year. It’s been the last four years. There have been significant increases. And beef today is at or near record levels. But we’ll manage through it.”

With all beef costs currently at record highs, any chain that specializes in beef is getting hit hard. Ruth’s Chris Steak House expects its beef costs to rise 6 percent to 8 percent for the balance of the year. Food cost inflation was a higher-than-expected 4.5 percent in the third quarter at Texas Roadhouse.

The problem dates back to 2010, with the onset of a severe drought in Texas and Oklahoma, which made it difficult for ranchers to graze cattle. Instead, they purchased hay and alfalfa, while corn prices also skyrocketed, contributing to that cost. Many ranchers reduced the size of their herds, and some smaller operations shut down altogether.

With so many beef cuts priced high, many say customers have traded down to cheaper cuts. Eventually, many people shifted from steak to hamburgers, increasing demand for ground beef.

The proliferation of better-burger concepts has also increased demand for ground beef. The growth of chains like Five Guys Burgers and Fries and Smashburger, and the emergence of smaller concepts like Habit Burger and Shake Shack, not to mention many local players, has only driven demand.

Another factor is demand in China, which has surpassed the U.S. as the world’s largest beef importer. China is purchasing a lot of Australian beef that the U.S. used to import in part to make burgers.

Most cattle raised in the U.S. is generally corn-fed and fat to promote marbling in steaks. That beef is frequently mixed with lean, 90-percent ground beef to achieve the 80-percent lean beef considered best for hamburgers. Much of that lean beef came from dairy cows, but some came from Australia. “We’ve now got competition for that product,” Barone said.

Burger chains used to use a processed product known as lean, finely textured beef. But critics trashed the product, even though the USDA approved it and considered it safe. Burger chains stopped using it, instead mixing the fat beef with 90-percent lean beef, limiting supply even further.

Those factors combined have added up to skyrocketing ground beef costs. Barone said 90-percent beef trimmings averaged $2.70 a pound this year, a 26-percent increase over 2012. “You might throw an extra 8 [percent] to 10 percent next year,” he said.

“It’s been a real struggle for many,” Dove said. “We were fortunate. We saw where the market was going in 2014, and we had the ability to jump into the market late in 2013 and lock in prices. That kept customers flat.” But those prices will rise next year.

That makes beef the exception. Corn prices are more reasonable now due to better weather this summer. That has brought the price of chicken down, and should reduce the price of pork next year. But beef prices take longer to catch up, and will worsen before they improve.

A cow has a nine-month gestation period, and requires another year-and-a-half to reach slaughter weight, Barone said. “Now you’re looking at a good two to two-and-a-half years down the road before the first wave of additional cows start hitting the market,” he said.

Barone and Dove don’t expect beef costs to ease until 2017. In the meantime, they will worsen because ranchers will keep some cows from slaughter to use for breeding, contributing to tight supplies.

“To get more, you’re going to have to get less first,” Barone said, which ranchers are currently doing.

Still, it’s a tough time for restaurants like Culver’s. Many chains have raised prices, but given the weak economic environment and a consumer focus on value, that option is limited. “We can’t take pricing up to the extent that beef has gone up,” Culver’s Koss said. “It’s been a tough environment for our guests as well.”

Culver’s doesn’t hedge on beef and works with its suppliers to ensure that it has enough beef from the Midwest for its more than 500 locations. In the meantime, the chain and its franchisees focus on costs they can control, like labor and food waste.

While the chain is “fortunate to have a pretty vast menu” that includes chicken and fish sandwiches, Koss said, about a third of its menu mix is burgers. Despite the high cost of ground beef, Culver’s isn’t shying away from promoting them.

“We do want to sell more chicken,” Koss said. “And we’ve promoted our cod this year. But right now we’re promoting a Butter Burger. We’re not going to shy away from promoting what got us here. We’ve just got to manage.”