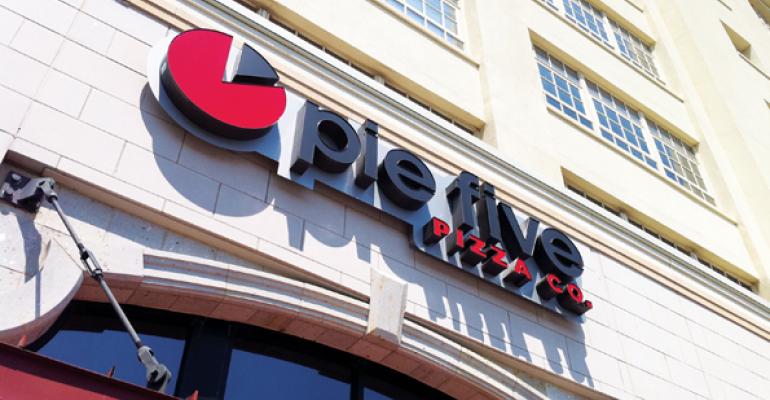 This interview is part of CMO Perspectives, presented by NRN in partnership with the National Restaurant Association&rsquo;s Marketing Executives Group. The monthly feature explores how leading executives are navigating the ever-changing restaurant marketing landscape.

Flynn Dekker, who joined Pizza Inn Holdings Inc. last December as chief marketing officer for the Pizza Inn and Pie Five Pizza brands, may have learned a lot about marketing in his years outside the foodservice industry, but he still notes that restaurants truly know how to reach modern consumers.

“Other industries need to take a page from restaurateurs,” Dekker said in an email. “This idea of customization and control isn’t going away. If you’re not adapting to this mindset and figuring out how to individualize the customer experience, you’re heading in the wrong direction. Restaurant people understand that better than anyone.”

The Colony, Texas-based Pizza Inn Holdings operates or franchises more than 300 restaurants, including about a dozen units of upstart fast-casual chain Pie Five Pizza, which won Nation’s Restaurant News’ Hot Concepts award in 2012. Dekker considers the challenge of revitalizing a legacy pizza-buffet brand like Pizza Inn while growing Pie Five Pizza to be one of the most exciting parts of his job, he said.

Before joining the company formally late last year, Dekker consulted Pie Five Holdings for nearly a year after closing an independent restaurant he had opened in Dallas. Prior to that, Dekker had held top marketing roles at Fogo de Chao and Metromedia Restaurant Group, having returned to foodservice after his marketing career took him to posts with FedEx, Kinko’s, EMI Music Distribution and Blockbuster.

Dekker’s first job upon graduating from Indiana University was an operations role with Pizza Hut in Chicago.

How did the idea for Pie Five begin and evolve?

We recognized early on that pizza was under-represented in the fast-casual segment. New oven technology allowed us to deliver a level of quality and consistency previously unattainable in the world of fast pizza. Sure, you could get a reheated slice or an overcooked small pizza from under a heat lamp, but no one was really satisfying guests’ demands for a fresh-baked pie served in five minutes or less. So we started with the belief that we could fundamentally change the way people satisfy their pizza craving while also giving them true control over their entire pizza experience.

You recently became Pizza Inn’s and Pie Five’s CMO after consulting for a year. What was the biggest surprise once you formally joined the company?

I learned that the company has come really far in the development of this concept, and yet I’m reminded daily that the opportunity for learning and growth is immense. This is reflected in the number of substantial changes we’ve made just since I signed on permanently to the Pizza Inn Holdings team in late December. In that short period of time, we’ve upgraded our point-of-sale system, brought in new agency partners across all disciplines, changed our marketing strategy, added new products, and updated the design and décor of our restaurants.

What have you learned about customers’ feelings about the fast-casual pizza experience?

I’ve learned that the consumer’s desire for control is stronger than I thought. Let’s face it: The generation (or two) that has come after me grew up in a world with more choices. Whether it’s electronics, clothing, entertainment or even pizza, there are infinitely more choices than ever before. Pie Five meets the needs of Millennials and non-Millennials alike who have grown accustomed to having control over both the content of their food and the price of their meal.

What excites you about marketing right now?

I believe I have one of the most interesting marketing jobs that exist today. I have two very distinct challenges in Pizza Inn and Pie Five. The challenge with Pizza Inn is to take all of the learning gleaned from our rich heritage spanning 55 years, coupled with our passionate franchise community, and make certain we are relevant to the world as it exists today. On the other hand, we have Pie Five, which forces us to constantly push the envelope, break the rules and continuously tweak our strategy because we are literally changing the pizza-dining paradigm.

What are you hearing from guests about your brand?

The standard answer to this question from a marketing guy would be, ‘They love us!’ To know us is to love us, but the vast majority of people out there still don’t know us or what the true benefits of ‘fast-casual pizza’ are. We have a lot of work to do to make sure we not only engage but also educate consumers about our brand and its many unique attributes.

Long runway ahead for fast-casual pizza

How big can the fast-casual pizza segment grow?

How big is the sub sandwich market? That’s what we’re talking about here. Do you know anyone who says, ‘I’m dying for a sandwich today?’ Replace the word sandwich with pizza and tell me if that doesn’t change the emotional truth of that statement. Pizza has been a staple of the American diet since long before many of the other types of fast-casual offerings that are thriving today appeared, so I believe you’ll see numbers similar to the other large fast-casual brands in our category before long.

You were one of the first fast-casual pizza concepts to the scene. Now it seems like a lot of competitors have emerged. How do you differentiate Pie Five?

Pie Five is all about consistency. The death of any restaurant — whether it be QSR, fast casual, casual or fine dining — is lack of consistency.  We deliver a great pie each and every time while offering guests more choices than our competition, all for one low price. We will continue to lead the pack based on our experience and passion for innovation.

How do you see the future of this segment ending up?

There are going to be a lot of new entrants into this segment over the next few years. That will initially help expand the size of the overall pie, so to speak, by increasing consumer awareness of fast-casual pizza. Those that continue to innovate, deliver a consistently good product and have a clear vision will eventually be found in every market in this country. Those that assume a limited menu means limited effort will fall by the wayside.

What restaurant chain (other than your own) do you think is doing a great job and why?

I like up-and-comers like Freebirds World Burrito. They seamlessly blend culture with commerce and have found a formula for taking the chain out of chain restaurant. I also love what Dunkin’ Donuts has done over the last several years to reverse their fortunes. Through product enhancements, public relations and clarity of vision, they have methodically steered that monstrous ship in the right direction. They are the gold standard when I think about a brand that has risen from near obscurity back to industry leadership.

How do you divide the company marketing resources between Pie Five and Pizza Inn?

Each brand has their own set of resources because each has its own set of needs. The challenges are unique for both brands, so the supporting staff must be hyper-focused on the specific needs of each. The unseen benefit from having two unique brands is that often a great idea that may not be the right fit for one may be a perfect fit for the other. While I like to keep the strategy piece separate, I expect the teams to work together for the greater good of all.

Clay Dover is the chief marketing officer at Raising Cane's Chicken Fingers. He serves as a board member for the NRA Marketing Executives Group and as an Advisory Board member of several restaurant industry organizations, including NRN's MUFSO conference board.