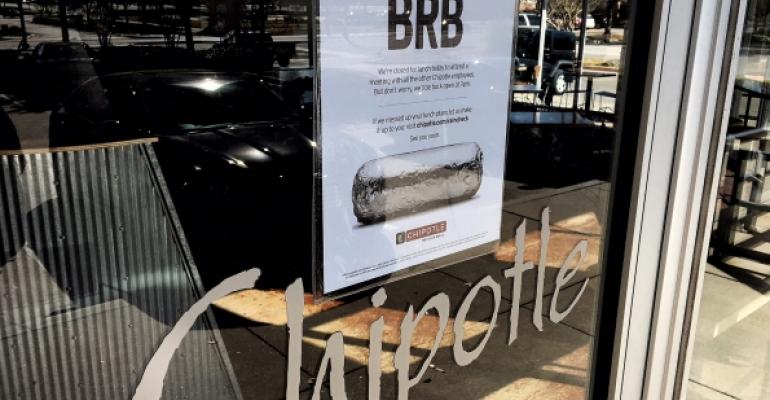 Chipotle Mexican Grill Inc.&rsquo;s 1,971 restaurants in the U.S. were closed for lunch Monday for a companywide meeting that was part update on new food-safety protocols and part rally to prepare for the return of customers. Below is NRN&rsquo;s coverage around this meeting and unit closures.

Qdoba gets in a dig at Chipotle on Twitter

Qdoba Mexican Eats on Monday gave an open-handed Twitter slap to Chipotle Mexican Grill for its closure and offer of a text “raincheck” to inconvenienced customers. The 661-unit Qdoba, a division of San Diego-based Jack in the Box Inc., tweeted: “Hunger doesn’t accept rain checks.”

Mondays happen to be a good day for Moe’s Southwest Grill to capitalize on Chipotle Mexican Grill’s closure.

With Chipotle closed until 3 p.m. local time on Monday, nearby restaurants were seeing some benefits. Moe’s Southwest Grill, the 600-unit brand owned by Atlanta-based Focus Brands Inc., was touting its “Buy One, Get One” deal to Chipotle customers.

Katy Spaudling, a spokeswoman for Moe’s, called it “the best rebound burrito in the market.”

Chuy Rodarte, general manager of a three-month-old Moe’s in Farmers Branch, Texas, said at 1 p.m. Monday the lunchtime crowd was just starting. “We usually have customers taking advantage of the Buy One, Get One offer,” he said, “and I expect that to pick up a little today.”

Fast Company was one of the few media outlets allowed into one employee meeting in San Francisco. The website reported Monday that Chipotle officials blamed some of the outbreaks on cross contamination, though the norovirus outbreaks in California and the Boston area were blamed on employees who came to work while sick.

Monty Moran, Chipotle’s co-CEO, told employees at the meeting new protocols require them to notify field leaders immediately if they feel sick or have vomited at home or at work.

If a worker or customer vomits in a restaurant, the location must be shut down immediately. Sick employees are not to return to work until five days after symptoms disappear, and workers will be paid during that time, officials said in the Fast Company report. During the meeting, videos outlined how workers are expected to clean surfaces or wash their hands. Some employees in the audience groaned as video after video described the new procedures, according to the report.

Take a look back at Chipotle's outbreaks of 2015.

The data was sourced from the Centers for Disease Control and Prevention, Chipotle and Minnesota Department of Health.

For some competitors, Chipotle’s misery makes them appy

Fuzzy’s Taco Shop, an 88-unit Mexican chain, on Monday offered a $5 Burrito Combo, but it was only offering the deal through the brand’s smartphone app.

“For those hard-core burrito fans who will be needing to satisfy their burrito fix this Monday, Feb. 8,” the Fort Worth, Texas-based company said in press release, “Fuzzy's Taco Shop is offering a solution at a special price: the $5 Burrito & Drink Combo."

Marcos Lopez, general manager of a Fuzzy’s unit in Farmers Branch, Texas, said Mondays are always busy, and his store was facing a packed house with few customers taking advantage of the deal.

Fuzzy’s noted that the $5 combination was only available on its “Friends with Benefits” loyalty app and it would disappear from the app at the end of the day. Those new members who downloaded the app on Monday got the offer immediately. Fuzzy’s has restaurants in 11 states.

On the Border Mexican Grill & Cantina on Monday offered a special on burritos and burrito bowls to accommodate hungry Chipotle Mexican Grill customers.

At the On the Border in Addison, Texas, about a mile from a shutdown Chipotle, general manager Allen Freeland said the restaurant was seeing a slight uptick in business.

“Mondays are usually slow anyway,” Freeland said, “but we’ve already done a half dozen to-go orders.” Chipotle’s closures gave the 150-unit On the Border, owned by Dallas-based Border Holdings LLC, a chance to debut its new to-go Burrito Boxes and Border Bowls offerings at the special $5 and $6 price points, depending on the proteins. “Our catering guests have enjoyed our burrito boxes for a long time” said Ashley Zickefoose, On the Border’s chief marketing officer, said in a statement.

“With Chipotle taking some time off on February 8, we want everyone to still get their burrito fix and try the best kept burrito secret in town.” On The Border has units in 33 states as well as Asia, the Middle East and Puerto Rico.

Chipotle announced on Twitter that their companywide meeting has finished for the day.

Meeting over. All restaurants will re-open at 3pm today. For detailed info on our focus on food safety, go here: https://t.co/PJwIlnaMx9

NRN Southwest Bureau Chief talks to a customer at a closed Chipotle location.

The Denver-based chain on Monday also launched a new web page offering details on new food-safety protocols. The page breaks down initiatives such as new guidelines for suppliers. Both farms and the company’s central kitchens will use high-resolution tests of ingredient samples.

Cilantro, for example, will be tested both at the farm before harvest and again after it’s cleaned and ready to be packed. Some ingredients will be processed at central kitchens, such as tomatoes. After being diced, batches of tomatoes will be tested. If pathogens are found, the entire batch will be rejected. The same process will be applied to beef, romaine lettuce and bell peppers. New protocols at the restaurant level include the marination of chicken and steak only at the end of the night, after other fresh ingredients have been prepped and put away to avoid cross contamination. Certain produce, like lemons, limes, jalapenos, onions and avocados, will be blanched for five seconds as a kill step.

Restaurants will also undergo “high frequency” cleaning and sanitation during service and at the end of each day. Each restaurant will required to go through weekly inspections by food safety field leaders; multiple annual inspections by corporate food safety teams,; frequent checks by third-party experts in addition to the regular inspections by local health officials.

Chipotle also offers paid sick leave and will offer programs to extend that leave when circumstances warrant, the website said. Incentives will reward restaurants that score well on food safety audits. Senior managers have been designated “food safety owners” responsible for making sure procedures are followed. In addition, the website outlines a new $10 million grower’s support initiative to help local farmers meet Chipotle’s new food safety standards. In 2015, Chipotle restaurants across the U.S. served more than 30 million pounds of produce sourced from local farms, about 12 percent of the produce used by the chain.

Chipotle has committed $10 million to provide education and training to small and medium-sized farms, as well as financial assistance in the form of grants or premiums to help cover the cost of enhanced food-safety practices, the website said. In addition, the chain plans to develop new partnerships with farmers using greenhouses and other technologies that meet Chipotle’s new standards.

The website also breaks down the multiple outbreaks, from the 243 sickened by norovirus in Simi Valley, Calif., in August to the 60 that fell ill from E. coli from October through November. Steve Ells, Chipotle’s founder, chairman and co-CEO, announced the supplier initiative via livestream video on Periscope from the companywide meeting. In the less-than-two-minute video, Ells said the $10 million in support will help local growers become safer, not only for Chipotle, but as they produce ingredients for other brands.

Correction: An earlier version of this story identified the Periscope video as six minutes long, not under two minutes.

Four to five potential Chipotle customers tried the door Monday at 11 a.m. CT to get into the Chipotle Mexican Grill in Addison, Texas, but after pulling on the handle they read this posted sign:

“BRB – We’re closed for lunch today to attend a meeting with all the other Chipotle employees. But don’t worry, we’ll be back open at 3pm.

“If we messed up your lunch plans, let us make it up to you: visit chipotle.com/raincheck”

Monty Moran, Chipotle co-CEO, said the companywide meeting is “an opportunity for us to describe in detail to our whole team all of the steps that we have taken to make our food safer before it ever arrives at the restaurants, as well as to highlight and explain the reasons behind some of the new procedures that have already been implemented.”

Read full story on what Chipotle is looking to do.

Signs on restaurant doors indicate Chipotle is ready to start launching freebie offers. To apologize for messing up lunch plans, the chains inviting guests to text in “raincheck” for a promotional offer.

Chipotle Mexican Grill Inc.’s 1,971 restaurants across the U.S. will be closed for lunch today as the chain’s roughly 50,000 workers gather for a companywide meeting on new food-safety protocols. Chipotle officials said they will be live Tweeting the meeting, and a live Periscope feed will be broadcast at noon EST. Company officials said they would give workers a comprehensive update on all the chain is doing to bring its risk of foodborne illness to as near zero as possible.

We’ll be live-tweeting our national employee meeting today to discuss recent and future food safety. And we’ll be on #Periscope at 12pm EST.

The goal: Bringing customers back after multiple foodborne illness outbreaks in the latter half of 2015 had many running scared from the brand.

Because of our national meeting today, all US restaurants will close for lunch and re-open at 3pm. Learn more: https://t.co/PJwIlnsnVJ

Restaurants will reopen at 3 p.m. local time on Monday.