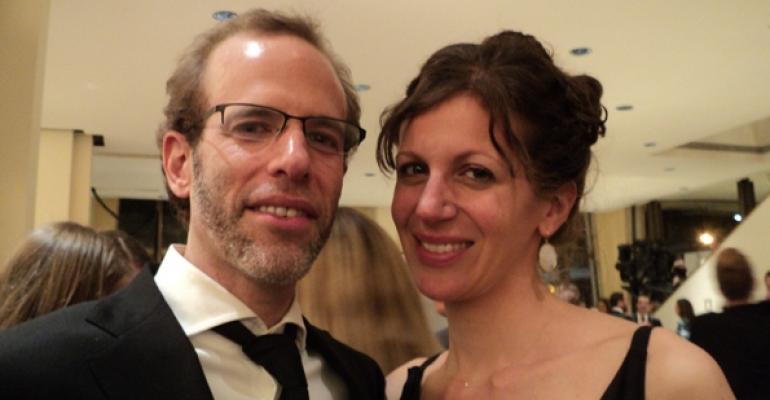 Dan Barber, whose restaurant Blue Hill in New York City was named the Outstanding Restaurant of the year, an his wife Aria.
Menu>Chef Insights

Notable foodservice professionals share issues that are top of mind during the James Beard Awards.

The James Beard Foundation Restaurant and Chef Awards is an occasion for people in the foodservice industry to celebrate their achievements and enjoy each other’s company — but work is never far from their minds.

Nation’s Restaurant News caught up with several restaurateurs and chefs during the event, which was held last week in New York City, and asked them about what keeps them up at night.

“What doesn’t keep me up at night?” asked Denver chef Jennifer Jasinski of Rioja, Bistro Vendôme and Euclid Hall, who won the Beard award for best chef in the Southwest. “Sometimes I have a dream about never getting stuff done,” she added, reflecting that multitasking that is part and parcel of running a restaurant.

Rick Bayless, Chicago-based chef-owner of Frontera Grill, Topolobampo and Xoco, had a similar perspective. “Our business never gets easier,” he said. “You have to keep performing every day. Your problems might get more interesting over time, but really it’s the same issues for everyone, no matter who you are. The 'dailyness' of the business is what keeps me up at night.”

Many of those issues have to do with what Paul Virant, chef-owner of Vie in Western Springs, Ill., called “staff drama,” echoing the opinions of many award attendees who reflected on the challenges of managing the diverse personalities that make up the foodservice workforce.

Bobby Stuckey, owner and master sommelier of Frasca Food & Wine in Boulder, Colo., which won the award for best wine service, gave a specific example: “When the alarm goes off because the pastry chef set it off.”

Staffing and fear of failure

Keeping staff and finding new ones as businesses expanded was on the minds of San Francisco chef Charles Phan of The Slanted Door, Nic Jammet of the Washington, D.C.-based fast-casual salad chain Sweetgreen, and restaurateur Jeremy Wladis, whose Restaurant Group operates several New York City eateries. Seattle-based chef and restaurateur Tom Douglas said he also worried about his staff, and it was getting them health insurance that keeps him up at night.

“Our business is nothing without our people,” said Douglas, who said he pays for 50 percent of the health insurance of anyone on his staff who works 25 hours a week or more. He said he was disappointed in the National Restaurant Association’s stance in opposition to universal health care. “I would love it if restaurateurs got behind health care, and did it for our crew,” he said.

“Lot’s of time, it’s the deadlines,” said Boston-based celebrity chef Todd English. “Or new, exciting ideas will keep me going into the night.”

Max MacKissock, executive chef of The Squeaky Bean in Denver, and Jasinski’s husband, also said he's also kept up by new ideas. His ideas tend to be food-related, he noted, with different ingredient combinations coming into his head as he tries to fall asleep. “I have constant food thoughts, of what’s coming next from the farms and what we’re doing with them,” he said.

, who won the award for best chef in New York City for his restaurant WD~50, opened Alder earlier this year, and he said the new restaurant kept him up at night. “It’s my first in 10 years,” he said. “The game has changed; everything has changed. Where were you 10 years ago?”

Critical acclaim doesn’t heighten the late-night demons, said Alfred Portale, chef and owner of New York City landmark Gotham Bar & Grill. In fact, any time he gets a good review, he said, “I think: ‘I’ve got to get there early in the morning to make sure we live up to it.’”

Dan Barber, whose New York City restaurant Blue Hill won the Beard Award for Outstanding Restaurant of the Year, joked that as a Jew from New York’s Upper East Side, it was to be expected that he’d be kept up at night. “It’s not obsession with success,” he added. “It’s fear of failure.”

However Danny Meyer, founder of the New York City-based Union Square Hospitality Group, said he sleeps just fine: “The longer you do this, the more you realize that it all works out, whatever it is.”