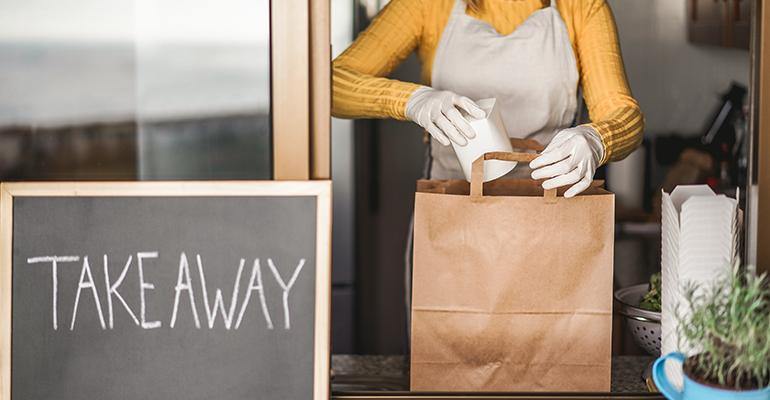 Pivots, best practices and culinary cultures on the move; the pandemic has brought many challenges in the restaurant delivery world, and the best ideas are rising to the top and taking to the road. Delivery experts Jamie Carawan and William Eudy share their insights and lessons from a tumultuous time.

How does delivery look when it works well? One key element is food that can stand up to being packaged, whisked away by a driver, placed on a porch and opened by the customer roughly 45 minutes later.

But another element, according to those who are thriving with delivery, is customers that have managed their expectations and are realistic. But that doesn’t mean these newly minted delivery stars slack off on doing everything possible to improve the experience, from developing new recipes to finding the best packaging.

When COVID-19 hit, “there were definitely a few weeks and moments of shock and awe,” Carawan recalled. To Buffalo Wild Wings, the 12 days of March Madness college basketball competition is not only “a big part of our revenue, but they also make up a big part of our culture.” They had planned to go big, with a sweepstakes featuring an Air B&B house inside a Chicago Buffalo Wild Wings restaurant. “We were set up to do it,” Carawan said, “but it never got used.”

The need to pivot quickly followed the disappointment. “When the winds change, you adjust your sails,” Carawan said. The team got to work on transporting that feeling of camaraderie and sports bar culture into customers’ homes.

Focus Brands, too, took the disappointment and shock and turned it into a pivot towards delivery, a direction they had been headed anyway.

Focus Brands’ McAlister’s Deli was “already structured to support pickup windows and to-go,” said Eudy, “and we had to pivot and make curbside pickup a big part of who we are.”

Before the pandemic, 50 McAlister’s restaurants had curbside pickup. “About a week after COVID hit, we went from 50 to 400 plus in a week,” Eudy said. “That’s a pretty quick reaction.

We had just rolled out a new app and reward program, so it was good we had that powerful app to enable online orders.”

Even so, “to get all your operators to do curbside in a week is pretty impressive,” he added. “You had to make changes and all the good ideas rose to the top.”

At Buffalo Wild Wings, “we’d been working on our off-premise and delivery over last few years, but it hadn’t been our biggest priority,” Carawan said. “We went to look at delivery and look at innovation…What do consumers want? How do we bring camaraderie and that game-on feeling to tables across the country?”

It took a couple weeks to get going, Carawan explained. With new software and new hardware, Buffalo Wild Wings was able to get back to “Super Bowl level” of wing sales by mid-April.

“We kept it all going,” he said. “That’s how we reacted to this crazy event we’re all experiencing.”

Face-to-face meetings (and menu tastings) have given way to Zoom calls and staggered kitchen schedules. Both Carawan and Eudy talked about virtual ideation, and praised vendors for being flexible and sending samples to everyone.

Different as it’s become, “it was never a doubt in our minds that we’d stop the innovative process,” Carawan said. “Being a culinarian, not [being able to] do that part is the scariest part. Innovation is a lot like working out; once you stop it’s really hard to get going again. That muscle will atrophy. It’s not as fun doing virtual ideation, but it’s better than not doing one.”

During months of virtual innovation, the Buffalo Wild Wings team has come up with new sauces and new salads.

There’s an unspoken understanding that delivered food will not be exactly the same as food received at a table in a restaurant. But some items can handle the trip better than others, like wings. “Consumers understand they’re not getting the same thing they’re getting in a restaurant, so the number-one thing is that the order has to be accurate,” Carawan said. “We focused and are focusing on things in our packaging innovation to make sure it improves order accuracy.” He called wings “an anomaly.”

“A lot of people are jumping into this category,” he added. “[Wings] travel really nicely and bring good flavor. It’s really not about wings; it’s about flavor.”

“The guest has been conditioned to not expect things to be perfect when it’s delivered,” Eudy agreed. “We do everything we can to make it right and make it good; we didn’t take anything off the menu.”

McAlister’s has been offering family meals and deconstructed deli kits that allow enough to make lunch tomorrow, a value-add customers have been appreciating.

Carawan summed up the many pivots the whole industry is attempting.

“I’m infinitely proud of what the restaurant teams have done,” he said. “What they’ve been through and what they’ve achieved. We’ve become more nimble, more commercially viable but also a more thankful team. I don’t know what’s more than dog years, but this has been this year. I think we have the ability now and the mindset now that we can do anything that may come at us.”