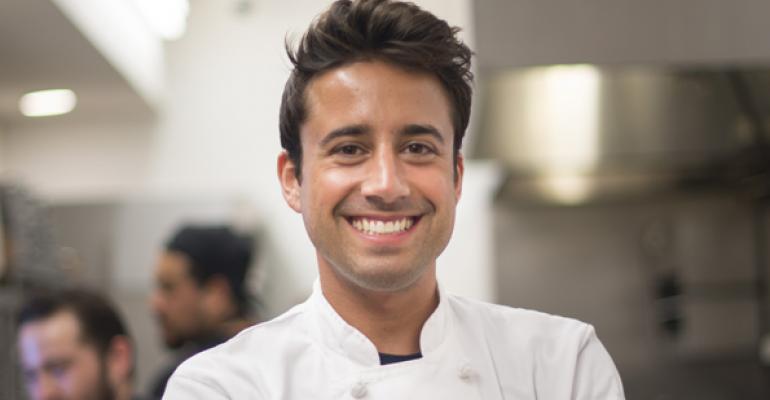 Chef Andrew Gruel talks to NRN about his mission to redefine the seafood dining experience.

Andrew Gruel’s mission is to redefine the seafood dining experience.

The co-founder and executive chef of Slapfish, a fast-casual restaurant with two locations in Orange County, Calif., one in Dubai and more to come, started with a food truck in 2010, gradually expanded to four trucks and then opened the first Slapfish in Huntington Beach, Calif., a year later.

A native of New Jersey, Gruel went to college in Maine and worked as a lobsterman to make money. He was drawn to restaurants, studied at Johnson & Wales University’s Denver campus and worked at seafood restaurants ranging from beach-side shacks to the Ritz-Carlton in Boston before heading to Southern California. Now he runs Slapfish, as well as Slapfish Trading, which buys and processes seafood.

As Gruel prepares to expand his business, he discussed his plans and upcoming seafood trends with Nation’s Restaurant News.

You say you’re trying to bring seafood to the masses in a whole new way. What’s unique about what you’re doing?

In my opinion, the seafood dining experience is kind of bland and boring, especially in the fast-casual world. We see the burger concepts are hot, pizza concepts, chicken concepts, but there’s really nothing for seafood except for your kind of greasy, uninspired seafood. We said, ‘Look, let’s make seafood sexy again — really do an approachable, affordable seafood,’ and the way we can do that is to buy either directly from the source or as close to that as possible. So we lumped in a trading company into the business model so we can cut out the middleman and have the right prices for the right quality as well.

Then you get [into] the whole sustainability conversation. That’s big with what we do, working with a lot of local aquariums. I previously started a sustainable seafood program with the Aquarium of the Pacific [in Long Beach, Calif.], the third largest aquarium in the country. We started that program in 2008, got a grant to do that, and that’s how I kind of morphed into this. We started as a food truck, actually, because raising money for a restaurant in 2010 was laughable.

At that time there were about eight gourmet food trucks in Orange County. We bought an old taco truck. Day one, the truck breaks down on the 405 and we’re in the carpool lane, where we shouldn’t have been, at 5 p.m.

But I think that was good, at least for brand awareness and positioning. It completely took off. We went from one truck to four trucks, including one for catering and one in L.A. Ultimately they all broke down in a four- to five-month period and we bought an old bagel shop. We started with only like six items on the menu and four tables, and gradually expanded as we could afford to.

Describe your approach to the menu.

We do our own unique twists on comfortable dishes. We have a from-scratch made lobster hot dog. We wrap it in bacon, smother it in peppers and onions. We do a chowder fry, which is our version of a poutine. We do lobster grilled cheese, [and we] make all of our own tater tots from scratch. We work with [Huntington Beach High School]; the students grow a lot of our vegetables, and we just started an aquaponics program with them. It’s a fully integrated system: We grow tilapia and all the effluent goes back in the beds to fertilize the vegetables. So we’ve got 16-, 17- and 18-year-olds doing that for us. We’ll process the fish, serve it in our restaurants and let that system grow as much as we possibly can. We haven’t harvested yet. We’ll harvest in about four months.

How long does it take to raise tilapia?

It’s incredibly invasive. It’s taking over the Chesapeake Bay right now. You’re seeing a lot of that in different fisheries in the U.S., where these invasive species are taking over and the National Marine Fisheries are putting like a bounty out for chefs to serve these fish. Lion fish, too.

That’s great. You feel morally good by eating this fish that doesn’t belong where it is.

What's on the menu

How will you be serving tilapia?

We’ll process it and probably do it as fish tacos or fish fingers or something fun like that. Our formula is to take something everybody knows — as simple as chicken tenders, grilled cheese, mac ’n cheese. We reinterpret and redefine it to make it something unique.

Tell me about the chowder fries.

We do hand-cut Kennebec potatoes, soak them for 48 hours, twice fry them and then smother them in New England clam chowder that we make twice a day. Then we top it with double-smoked bacon. It’s literally a poutine, but with clam chowder instead of cheese curds and gravy.

And how much is that?

Do you make any profit at that price point?

We do. We buy so much lobster in bulk, and we get it pretty much direct from the fisherman or processor, that we’re able to have it be a good margin item at $15.

Is it already processed and frozen when you get it?

It’s good for you, and it can be very sustainable.

It can be incredibly sustainable, and I think that people are afraid. There’s a lot of sensationalism in the media about contaminated seafood — mercury and this and that — that it’s scaring people away from eating seafood. We’re trying to cut through that quagmire.

From what I understand, the benefits of Omega-3 fatty acids outweighs the possible harm from eating PCBs, which are in everything anyway, and the minimal mercury you might ingest is something you’re inhaling anyway if you live in a large city.

I wish everyone else knew that. Another part of our message is I’m a huge fan of aquaculture. I know “fish farm” is a dirty word, and the United States is so far behind. We have no framework for open ocean aquaculture. We have tilapia farms, clam farms, oyster farms, etc. And catfish, which is huge. I actually do love catfish, and that’s something else I think you’re going to see on every menu.

I’m surprised I haven’t seen more catfish on menus, especially since farm-raised catfish tastes like any other white fish, and since Southern food is so trendy.

I think you will see more. In the same way the beef industry has started to use off cuts, we’re going to see that with [inexpensive species like] catfish. Trout might even start to make a little bit of a play. But for us, it’s about scalability. We buy in bulk. We’ll take 50,000 pounds of seafood at a time. So we’ll look long term, and we’re also going to be shipping it to the Middle East, so our model’s a little different. We have to ask if it’s going to be sustainable economically as well, and for how long can we catch this, and is the price point going to remain the same.

You’re a trading company as well as a restaurant company, right?

We have Slapfish Trading, which is part of our company. So we’re a [seafood] receiver, and that’s how we can work with and process all the tilapia from the high school.

Does that require licensing or certification?

Yeah, you’ve got to get particular licensing in California, naturally. Processing obviously comes with its own regulations, but nothing that a couple of forms and checks can’t take care of. But you do save money. It’s the logistics and creating the relationships and supply lines [that’s a challenge], but that’s also the fun part.

So you have the two locations, you’re working on the Middle East and some airports in the works?

Our franchisee in the Middle East is a company called Magnolia Restaurant Management. They have about seven other brands.

We just started working on deals with Baltimore-Washington airport and LAX, and then we’re opening more company stores throughout California, and we’re trying to open here on the East Coast. We want to do company stores and then morph into franchise locations. So I’m just trying to seek locations.

Any idea where you’d begin in the Northeast?