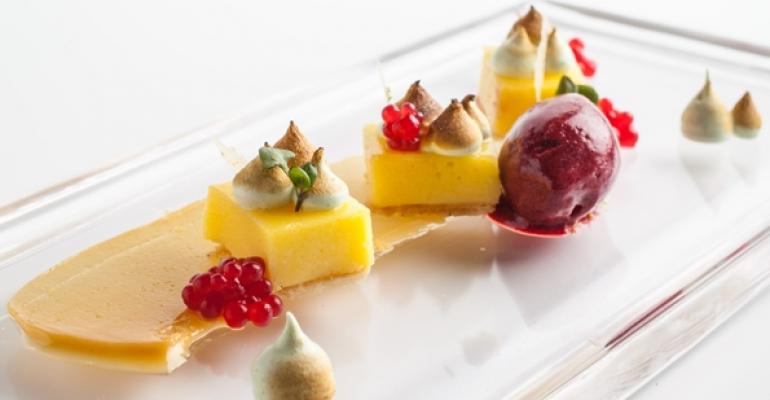 Michal Shelkowitz’s resume reads like a checklist of the best of New York City’s fine-dining restaurants.

The Israeli pastry chef, who now heads the dessert operation at chef-owner John Fraser’s Dovetail on Manhattan’s Upper West Side, cut her teeth with stints at wd-50, Cru and Danny Meyer’s Gramercy Tavern. She then took a job at Jean-Georges, working under mentor and celebrity pastry chef Johnny Iuzzini, honing her skills in classic French cuisine.

Following several other career moves and an educational sabbatical in Provence, France, Shelkowitz landed at Dovetail in 2010, where she focuses on creating desserts that often feature vegetables, herbs and spices.

She recently spoke to Nation’s Restaurant News about small plates, seasonal ingredients and the latest trends.

What’s on the dessert menu at Dovetail right now?

I work on keeping it as seasonal as possible. I just got some green strawberries in and have been coating them in a beer batter and frying them, kind of a play on fried green tomatoes. They're served with a fennel orange jam and vanilla ice cream. They're super tart and kind of burst when you bite into them. It's a great juxtaposition with a classic vanilla ice cream.

I try to create a dessert menu that has a little something for everyone. There's almost always one lighter, frozen dessert. Currently it's a Kaffir Lime Semifreddo served with candied kumquats and a vanilla-tangerine broth, poured tableside. I'm a huge fan of cake, so I always have some kind of cake, too.

It always starts with a single ingredient I want to work with and then I brainstorm what other two flavors I'd like to see paired with it. The inspiration is making those three flavors work together. That’s what gets me excited. From there, it's just a matter of what form each ingredient is going to take.

You have relatively few desserts on your menu. How often do you change it up?

I definitely try to change it up quite a lot. There is a new dessert on the menu at least once a month. In the summer months, when there is such an abundance of great produce, I get such a rush of ideas; I get antsy and may change up desserts every couple of weeks. I like having a smaller, more focused dessert menu where I can put a lot of attention to each one, rather than tacking on a laundry list of desserts just to fill up a page on a menu.

What do you think of small dessert plates?

I definitely enjoy serving courses of my desserts in pared-down sizes — just two or three concentrated bites. I like to be able to serve multiple quick courses so that our guests can try a range of items without having a bunch of full-size desserts in front of them at the same time, which can tend to be daunting.

What are some examples of your smaller plates?

If someone wants to try a number of desserts, I'll size down anything to make it more practical. I also like to do pre-desserts for tasting menus — small bites that focus on a maximum of three flavors in a very compact form. Right now, I'm doing a smoked pastry cream served with grilled pineapple and oat streusel. It's a one-spoon bite, but it packs a lot of flavor. It's like a savory, smoky pineapple crumble.

What is the role of the desserts you serve at Dovetail?

The dessert course has always been a crucial element of the dining experience, as it's the last thing you're eating — the closer of the meal. Most people are already getting full and have had a lot of different flavors throughout the meal, and you want to keep the momentum going. I want the desserts to be a fluid transition, a natural ending. Most of my desserts tend towards the lighter side and are not too sweet. They incorporate a lot of savory elements, so it feels more like an integrated part of your dinner, not just a jolt of sugar tacked on at the end.

I love incorporating vegetables into my desserts, and being at Dovetail is a great platform for me to do that. I always have one dessert that's focused on a veggie. This month is rhubarb. I'm making a Rice Pudding Tart with a super thin, crispy phyllo shell topped with slow-poached rhubarb. The sour pop of the rhubarb is always so pleasing. Peas are also a favorite of mine to work with. I make a Frozen Raspberry Crème Fraiche Parfait with sweet pea sorbet and wild mint.

What seems to be most popular with your customers?

The Bittersweet Chocolate Soufflé is always the heavy hitter on the menu. It's just so classic and elegant; it never fails to illicit 'wows' in the dining room. We pour caramel sauce tableside and change up the ice cream flavor seasonally.

You have a large selection of tea on your menu. Are you involved with selecting those?

Our beverage director is in charge of tea purchasing. We get ours from In Pursuit of Tea. They have an amazing selection of loose-leaf teas. I'm a big tea drinker and am often sneaking them into my desserts, whether it is chai ice cream, or Earl Grey macarons or a green tea streusel made with the ground tealeaves. Right now I'm a big fan of Genmaicha Green Tea sorbet. It gives the sorbet a wonderful toasted, earthy flavor.

As far as trends, what are you seeing from your peers and at other restaurants?

I think the Nordic cuisine movement has definitely influenced desserts as well — very natural, organic platings and totally uncluttered. You see lots of use of wild greens, fruits and herbs.