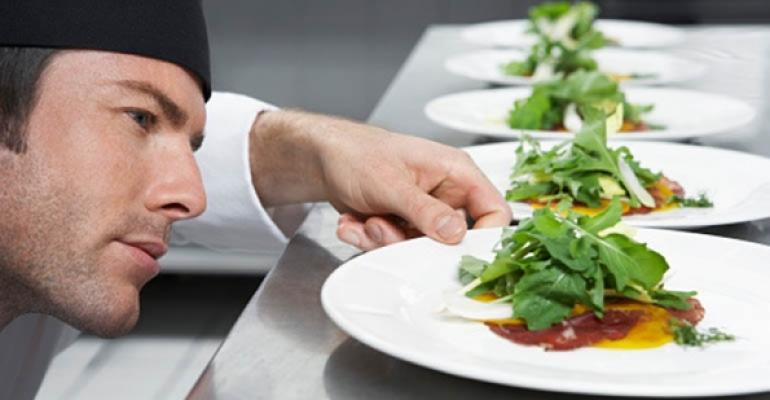 In a monthly series, menu trend analyst Nancy Kruse and NRN senior food editor Bret Thorn debate current trends in the restaurant industry. For this installment, they discuss chefs who are more concerned with ego than diners.

Kruse Company president Nancy Kruse asks if the death of ego-driven cuisine is near.

One of my favorite culinary gadflies is Alan Richman, the restaurant critic for GQ, whose trenchant observations of the dining scene have won him 14 James Beard Awards for food journalism and many more brickbats from the subjects of his reviews.

One of my favorite columns of all time is his epic takedown of what he calls “Egotarian cuisine.” In it, he amusingly lays out the clichés of a food movement that exists, he charges, not to delight the patron, but to stroke the unbridled ego of the chef. Dubbing the dishes as ingenious, sometimes brilliant and frequently awful, he describes the hallmarks of such operations, including foraged foods likely pickled or fermented and eaten from earthenware bowls crafted by women living in upstate woodlands. He forgets their Birkenstocks, but you get the picture. It was food that he characterized as coddling the chef, not the customer. To paraphrase, he was describing restaurants long on intellect but short on soul.

I was reminded of Richman’s rant by my own recent experience at a hot new restaurant. You know you’re in trouble when the server warns you away from certain dishes, such as a trio of hearts. The beef, he said, was pretty good, but the chicken and duck hearts were apparently turning off customers in droves. Ditto for the fish-head stew and a couple of other dishes based on foods reclaimed from the garbage pail. While not quite Egotarian, this place exhibited all the hallmarks of its first cousin, what I think of as “Didactarian cuisine,” which is very much of-the-moment with its sober, mindful and, dammit, totally responsible menu. It’s all about farm-to-table, trash-to-treasure small plates that are supposed to make us reconsider our profligate food waste, a truly important issue finally getting the attention it deserves, but really makes us want to stop at McDonald’s on the way home.

Egotarianism was very much in evidence, however, at the restaurant’s bar. The requisitely bearded bartenders solemnly wielded the tools of the hipster bar trade, including eye droppers to measure the artisanal bitters and ice picks to hack away at the huge hunk of ice made from specially filtered water. The complex cocktails, some comprising half a dozen ingredients, boasted enough arcane herbals and botanicals to stock an apothecary.

It’s been interesting, then, to see the raft of recent activity emanating from some of our most hallowed halls of gastronomy. Danish chef René Redzepi, godfather of the austere New Nordic cuisine, is opening a neighborhood bistro in Copenhagen described as an approachable family place. Chicago chef Grant Achatz, the reigning monarch of modernist cuisine, has announced his venture into casual dining. And New York City’s Eleven Madison Park revealed that it plans to dump its 25-course tasting menu in favor of simpler foods. Will Guidara, a partner in the operation, was quoted as saying, “It’s not about us just serving you the meal we think you should eat.” By the way, Guidara is also on the verge of opening a fast-casual spot on Park Avenue.

So what game is afoot here, Bret? Could we be seeing the beginning of the end of the kind of ego-driven dining that Richman skewered so adroitly? Or have the chefs in question simply become smarter business people? After all, their high-end flagships typically incur astronomical food and labor costs while playing to a very limited audience. Do you think tweezers and eyedroppers will lose their luster in the kitchen and go back to the medicine cabinet?

By the way, in case you’re wondering what I ate at the Didactarian joint, I chose the beef tallow candle, bespeaking the return of animal fats to the menu. I was aware that some chefs are making the edible votive candles to melt over breads or vegetables. In this case it was afloat in a bowl of sofrito, the oil- based condiment. Unctuous to a fault, as an appetizer it made a really great lip balm.

Nancy, I think this is all part of one continuous, ever repeating, and, in its own way, beautiful cycle.

Each generation in the modern era breeds a group of superstar chefs who are out to change the world, but then, having changed the world a bit, but less than they thought they would, they mature and calm down. It started in the 1960s with Paul Bocuse and his friends, who upended traditional high-end French cookery with La Nouvelle Cuisine, breaking (gently, in retrospect) from the classic presentations and techniques. Never mind that French Haute Cuisine had really only been codified with the publication of Auguste Escoffier’s Le Guide Culinaire in 1903. It was heralded as a revolution, and the culinary world was changed forever.

But not completely. Things settled down after that and traditional cuisine remained the order of the day in France. When I was in culinary school in Paris in 1986, whenever a student messed up a dish one of the chef-instructors would mockingly ask if it was nouvelle cuisine.

But by the 1980s there was a new generation of chefs — a couple of them, actually — this time in the United States, who started creating regional American cuisine. You had Michael McCarty, Alice Waters, Jeremiah Tower and friends starting a farm-to-table movement by creating California Cuisine (they actually got the ball rolling in the 1970s), while Stephan Pyles, Mark Miller and friends were dressing up Tex-Mex and other north-of-the-border Mexican food into Southwestern Cuisine. Also there was Paul Prudhomme in Louisiana, of course, beating the Cajun drum.

Bret Thorn talks about the cyclical nature of food trends:

And the culinary world was changed forever again. But not completely. Fine dining was still mostly French, and everyday dining was burgers and fries or fried shrimp or chops with a side salad of iceberg lettuce with Thousand Island, “French” or blue cheese dressing.

Then we had at least two rounds of Fusion.

All of these movements expanded culinary possibilities, and then got silly. For a year or so around the turn of the 21st century, it was hard to find lobster in New York City that wasn’t cooked with vanilla.

Then molecular gastronomy came along and everything was either topped with jiggling masses of “spherified” globes of liquid, bubbles of unappetizing foam, or dust made by mixing some kind of fat — olive oil, foie gras fat, whatever — with maltodextrin.

Chefs got over it — and few diners really got into it — but those techniques found their more subtle places in the culinary pantry. Recently I had fries covered in bacon dust that were pretty good. The dust did get a little pasty, but I appreciated the effort.

But chefs, like all lucky people, grow up. Redzepi is in his late 30s, and Achatz is in his early 40s. They have made their revolutions and forever expanded the possibilities of what we think food can be. Now they’re moving on to things that might be less radical — although we can’t say for sure because we haven’s seen them — but that will no doubt reflect their own personal revolutions.

There’s a whole crop of Millennial chefs out there though, and I’m sure the next revolution is in the offing.