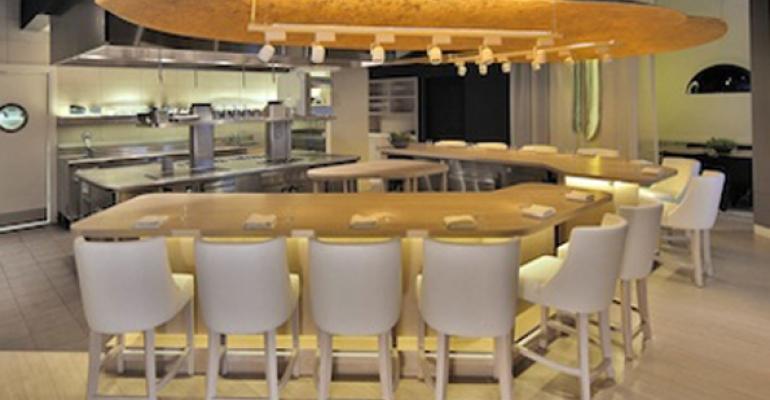 Since 2003, restaurateur José Andrés had turned customers away from Minibar, a six-seat counter upstairs from Café Atlantico in Washington, D.C. Reservations were booked a month in advance at the tiny spot where, in the spirit of who Andrés calls his “friend and mentor,” godfather of avant-garde Spanish cuisine Ferrán Adrià, a collaborative team of chefs would use their imagination and culinary skills to present guests with multicourse tastings that over the years included such dishes as foie gras coated in cotton candy and arugula-stuffed jícama topped with crushed Altoids.

Now, after what Andrés calls a “summer vacation,” the Minibar has reopened in a new location, a 3,750-square-foot-space formerly occupied by Zola Wine & Kitchen. Seating has been expanded to 12 seats, and design elements include gold-leaf domed lighting and a disco-style restroom.

The dining room also has been altered and now matches the format of an emerging class of restaurants — including Momofuku Ko in New York City and The Catbird Seat in Nashville — that serve tasting menus of cutting-edge cuisine at stratospheric prices to a sold-out room of guests all seated around an open kitchen. Andrés said the new format allows for a greater exchange of ideas, improves productivity and enhances the dining experience.

“Minibar is my nerve center. It’s where everything begins,” said Andrés, whose ThinkFoodGroup operates a dozen restaurants, in a press release. “It is a place of collaboration, of creativity, of love. Here we honor the past and traditions and translate that into ideas for our future.” 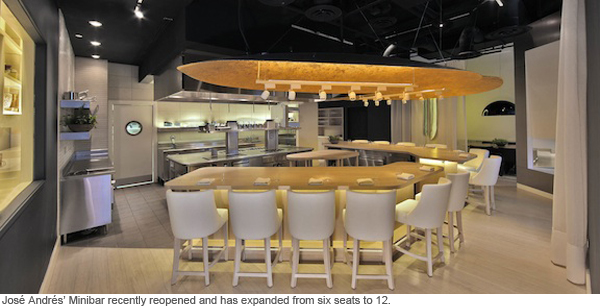 “I’m happy now that we have a few more seats and the option to have a few more people,” Andrés told Nation’s Restaurant News, adding that having a freestanding restaurant was necessary for such basic matters as being listed in restaurant guides. Previously, publications such as the Zagat Guide didn’t list Minibar as a separate restaurant because of its upstairs location — which Andrés said was an unfair oversight.

The hierarchy of the kitchen, albeit led by ThinkFoodGroup research and development director Ruben Garcia, is somewhat fluid, Andrés said. “People take different roles and duties at different moments of the week or month,” he said. “The way we work, the team is more important than the individual. Our organizational chart is less pyramidal and more flat than other organizations.”

A meal at Minibar consists of more than 20 courses and its price starts at $225 per person. Beverage choices range from a nonalcoholic $45 pairing to a reserve pairing, called The José, for $200. The restaurant is open Tuesday through Saturday for dinner only.

Andrés said that, although some customers complain about the long length of the meals, he compares them to the experience of going to an opera, a symphony, or a fashion show.

“I believe these kinds of menus are here to stay,” he said of the extensive menu. “They’re not for every day; you don’t go to the opera or the philharmonic every day, either. The long menu to me is the most amazing way you can sit down and enjoy a meal. It’s the haute couture of food."

He added, “I would argue, why one plate only? It’s almost like, imagine you have a piano and only play two notes. It’s really boring.”

Correction: November 26, 2012 An earlier version of this story incorrectly stated that Minibar was booked two months in advance; it only accepts reservations one month in advance.