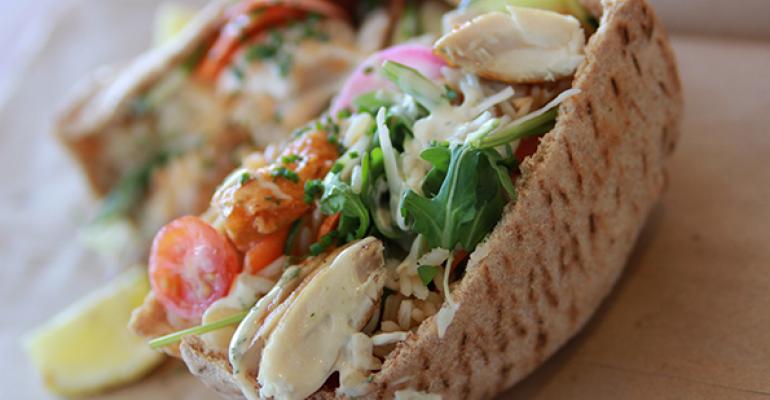 <p>Sustainability is top of mind at Slapfish. Pictured here is a &quot;Pitarito.&quot;</p>
Seafood Trends

Take seafood that’s fun, affordable and sustainable, serve it in a fast-casual setting, and you have trendsetting restaurant Slapfish.

Slapfish co-founder Andrew Gruel opened the chain in 2010 and it has since grown to six locations — two company-owned and four franchised — in Southern California, including one at Los Angeles International Airport. Another dozen restaurants are currently under development, Gruel said.

To keep prices down, Gruel set up his own trading company, although he recently handed over delivery responsibilities to his distributor. 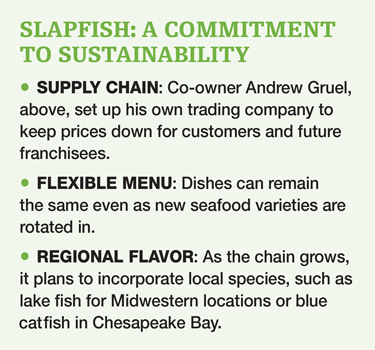 “We’re now basically just brokering and then letting our broadliner distribute it to our franchisees,” Gruel said. “Less infrastructure, but we still get that same value and direct-to-the-source competitive advantage.”

The restaurant’s menu is set up so that items can stay the same even as new fish are rolled in based on availability. That way, the chain can source lesser-known varieties of fish without scaring away customers or unsettling current or future franchisees.

“They’re not necessarily ordering a salmon taco,” he said. “If I open in Minnesota it might be a lake fish taco, or if I open in Chicago it might be Lake Superior white fish.”

The local menu could also include blue catfish from Chesapeake Bay, which is not only sustainable, but an invasive fish that threatens native species in the area.

“By eating and fishing it more you’re cleaning up the ecosystem,” Gruel said. “I did a pop-up in New York and served it there, and people loved it.”

Gruel previously told NRN that by staying on top of sustainability issues and keeping his menu fun and approachable, he plans to “make seafood sexy again.”