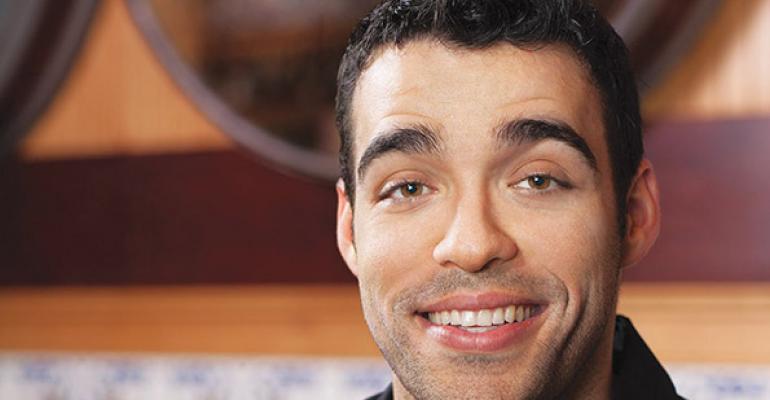 Five years since opening it’s doors on Michigan Avenue in the heart of Chicago’s Magnificent Mile, The Purple Pig can’t seem to keep up with the hordes of tourists and locals alike eager to sample the restaurant’s progressive Mediterranean food. And chef and partner Jimmy Bannos Jr., for one, couldn’t be happier.

“It’s crazy here,” he said with equal parts exhaustion and elation during a rare lull in the breakneck pace of his schedule.

While he’s speaking specifically of The Purple Pig’s explosion in popularity, there’s also the broader context of the booming Chicago food scene in general and, even more broadly, the changing tide in fine dining. Culinary expertise used to be centered on just a handful of coastal cities.

“That’s not the case anymore,” Bannos Jr. said. “People are coming to Chicago. People are going to Charleston, S.C. It’s really exciting and it’s good for everybody.”

One reason people are looking to Chicago for exciting food is The Purple Pig, which Bannos Jr. and chef-partners Scott Harris, Tony Mantuano and Bannos Jr.’s father, Jimmy Bannos Sr., have quickly turned into a Midwest mecca for cheese, charcuterie and wine. It’s also why Bannos Jr. is the recipient of the 2015 MenuMasters Innovator of the Year Award.

He may only be 30 years old, but Bannos is hardly new to the business. A fourth generation restaurateur, he grew up in the industry, literally — busing tables at the age of five at Heaven on Seven, the family restaurant that his father still owns today. Bitten by the culinary bug, he headed off to hone his skills at the College of Culinary Arts at Johnson and Wales University in Providence, R.I., which included an internship at Emeril Lagasse’s famed New Orleans restaurant, Emeril’s. Following graduation, Bannos spent six months in Italy, plunging himself into the culture and cuisine of the Mediterranean. He then spent three and a half years in New York City working under industry heavyweight Mario Batali, at Del Posto, Lupa Osteria Romana and Esca restaurants, before returning to his hometown of Chicago and turning his full attention to The Purple Pig.

With a substantial selection of charcuterie and dishes that incorporate pork jowls, sweetbreads, tripe and pig tails, it’s not unfair to assume the restaurant caters to a more carnivorous diner, but Bannos, who was named Rising Star Chef of the Year at last year’s James Beard Foundation Awards, said that couldn’t be farther from the truth. In fact, the menu is very diverse, with a vast selection of cheeses, seafood and seasonal vegetables that have become just as popular with diners looking for a fresh take on a classic cuisine.

“When I was developing the menu, I didn’t want it to be meat focused because you are excluding a huge demographic of diners,” he said. “I can’t even tell you how many vegetarians come in to eat here.”

It’s that diversity and mass appeal that has lines forming out the door and Bannos pushing himself to keep getting better. He said his focus is on making The Purple Pig the best restaurant it can be, rather than building a multi-unit juggernaut.

“The No. 1 goal is to continue to drive this place and see what happens when you push yourself and see how much one place can evolve,” he said.  “I’ve immersed myself into a ton of reading, and the more you learn, the more you realize how much you don’t know.”

As for his son’s success in the family’s trade of choice, dad couldn’t be more proud.

“I am extremely proud of Jimmy, both as a father and a business partner,” Bannos Sr. said. “For him to achieve what he’s achieved at such a young age is incredible, and the whole Purple Pig family is proud to see him be recognized for his truly unique and innovative menus.”