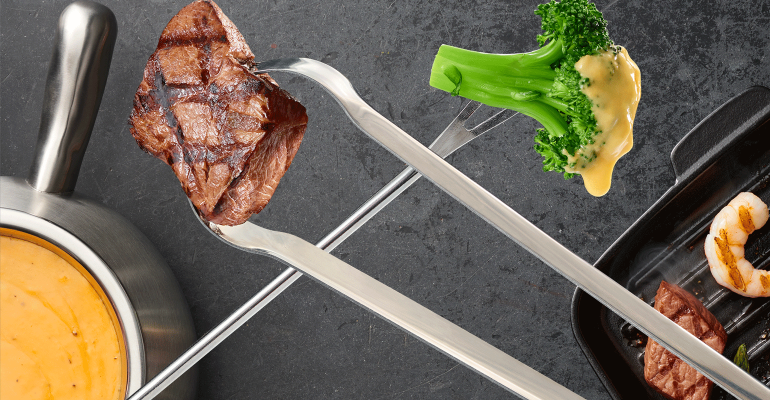 The Melting Pot Restaurants, Inc., is expanding beyond its traditional fondue pot and introducing grills to its 117 locations.

The casual-dining chain based in Tampa, Fla., has long offered tableside cheese fondue appetizers and chocolate fondue desserts, as well as savory fondue entrées featuring meats and other raw items that guests cook in oil or in one of three different broths.

Melting Pot president Mike Lester said the broths were introduced at the 43-year-old chain around 25 years ago in response to guests looking for more healthful options. Although guests were slow to take to the three broths — vegetable, citrus-cilantro Mojo broth and wine-rich Coq au Vin style — they now account for around 95 percent of entrée orders.

“They like the broth, but they miss the beautiful caramelization that came from the oil,” Lester said.

He said they’ve been testing cast-iron ridged griddles at their international locations — in Saudi Arabia, Dubai, Mexico and Qatar — for the past couple of years, and then last year commissioned United Laboratories to test the air where the griddles were used to make sure they were in line with American air-quality regulations.

“That passed with flying colors,” in December last year, Lester said, so they began testing the Staub cast-iron enamel-coated griddles in the United States. They work on the same induction cooking platforms as the fondue pots. 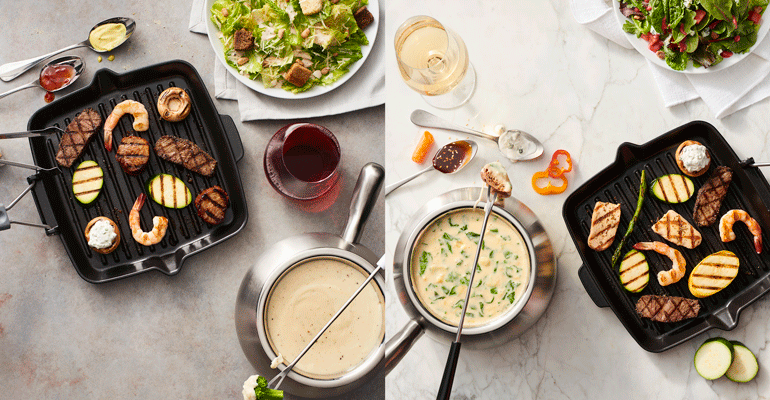 “We knew right away when we went into test with them that the consumer loved the grill and the flavor,” Lester said, adding that it took longer to figure out operations — exactly how to cut and season the grilled items, for example.

Some of the meats are marinated and others have dry-rub seasoning. Guests are encouraged to add their own garlic and wine seasoning, which is brought out for the restaurant’s salad course, between the cheese and the entrée.

“The guests are really engaged and interacting with it on a really cool level,” Lester said, adding that one or two guests at each table generally take over as grill masters. He said that, although the cooking time is a little longer than for the broth and oil entrees, they can cook more pieces at a time, so the overall dining experience is actually shorter.

Lester said that The Melting Pot’s customers have always skewed female, but, based on social media activity, men are taking an interest in the new grills, which will be rolled out systemwide by Aug. 28. He said a lot of female guests are tagging men as they engage with social media promotions for the grills.

“We’re seeing the guys really love the grill cooking style at the table,” he said.

Lester said the griddles cost about the same as the fondue pots and the average restaurant has spent around $2,500 to $3,000 purchasing them.